In June 2016 Teddie came into our lives, born on her due date. Little did we know the unexpected journey we were about to embark on.

We were enjoying newborn cuddles when during the newborn check, it was noted that Teddie was floppy. We weren’t really concerned (as first time parents we had no idea what to expect). She was taken to see a doctor and it was decided she just needed some food. Teddie, however, struggled to feed and later on that day she was admitted to the special care baby unit. Hypoglycaemia was given as the diagnosis and again, we were initially unconcerned. The treatment was to get her blood sugar levels up and then slowly wean her off the glucose drip. It sounded simple enough.

On the eve of Teddie’s second day in the world we were taken into a private room. We were told that they thought Teddie might be in cardiac failure and someone from the Freeman Hospital was coming now. We were told that her head was big as well as some of her organs (kidneys and spleen) all of which needed to be scanned. They thought her limbs were short and a full X-ray was needed. She also had low muscle tone. By the end of her fourth day she was on oxygen. We were devastated. By the end of Teddie’s second week the scans revealed nothing of note or that could explain what was going on. This was when Teddie was referred to genetics. 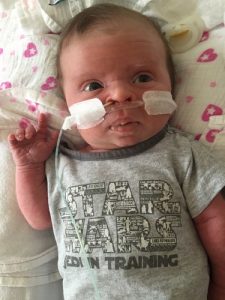 The hospital beeping is scary, but it’s scary when it’s gone. We went home after three weeks (which felt like a lifetime).

She came home on oxygen, which was a bit overwhelming but we quickly got used to it. We were making notes for months over everything – similar to what they did on the ward (such as how much milk she was feeding, her weight etc). But after a while we started to calm down a bit and just enjoy Teddie being at home with us. I started taking her to baby groups and getting out the house. You get stared at a lot but mainly people are kind and simply ask about the tubes and the tank.

Our lives became (and still are) lots of hospital appointments.

Teddie is now two. We were discharged with a scary predicted prognosis. She is still too young for us to know what the long-term will be. She does have delayed development. She had heart surgery to repair a hole. She had gastric erosions. She has hypotonia. She still has severe laryngomalacia and moderate trachiomalacia. Her head circumference cannot be plotted in the red book as it is off the top of the page. We still have loads of hospital appointments, as well as additional input from portage, physiotherapy and speech and language therapy. She isn’t walking and hasn’t spoken a word yet. We’ve had a few hospital admissions too. She is still on oxygen though just at night.

She has had several rounds of genetic testing and remains undiagnosed. The next step for us is the 100,000 Genomes Project. 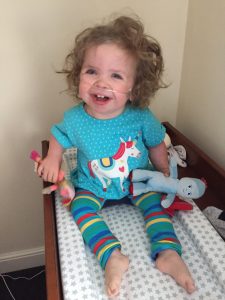 Despite the unexpected and very bumpy ride, we couldn’t imagine our lives without her. The unexpected is scary. Not knowing what the future holds is also scary, but she is an absolute delight.

She is so laid back and happy that it amazes me that she’s been through so much in her short little life. She loves knocking down towers, playing with cars and bringing us ‘that’s not my’ books to read to her. She also loves in the night garden, hey duggee and go jetters. She goes to nursery and will eat literally anything.