I’m Erin Finnie, I am eight years old and I have a mam and a dad and a baby brother. We are from Ashington, Northumberland.

My brother Jackson is two years old and he’s been living in hospital for nearly a year.

Jackson likes cars because he likes to check the wheels. He likes big hugs off me and loves watching Peppa Pig. He only holds my hands as doesn’t like other people touching him. He doesn’t like doctors who make him ill.

Jackson holds his breath – this makes his SATs go down, then he goes blue or red. I sometimes have to give him some of my breath when we have pressed the emergency buzzer. I think this makes Jackson scared.

Jackson can’t walk properly. He has PN (parenteral nutrition); this gives him energy to play and be happy.

Jackson has feed into his tummy but his tummy doesn’t work so it goes into his JEJ (Jejunostomy JEJ Feeding Tube).

I’m happy to have a brother that is different because he will be famous and he is so cute. When he stops breathing I feel scared and worried at the same time.

I feel sad and worried because he is undiagnosed but I know he will fight through this. If I could change just one thing, it is that we would be home and not living in hospital. I think it makes mam and dad feel scared.

A diagnosis would definitely make things easier because we would know how to solve this. We would know what the matter is – it would be much easier.

He has to go into hospital all the time. This time we have lived there for eleven months. I stay by his side. When my dad is at work I sleep on the floor in hospital. 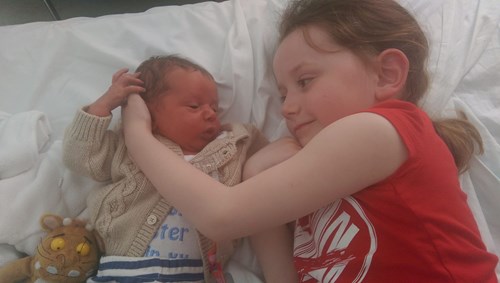 Life is hard. It’s hard going to hospital every day I get travel sick travelling to and from school every day. And I have to get up really early so I can get to school on time because it’s a long way from the hospital. It’s hard because mam and dad get sad sometimes because of stress.

I have an amazing brother who I can play with. I teach him things and he loves me. I was the first person he looked at when he opened his eyes.

SWAN UK have sent Jackson balloons and that made him happy.

I love being a sister. I wish the doctors could fix Jackson but my life is alright in the end because I still get to do things.