Put on your red shoes …

You may have already read Lisa Beaton’s speech that she made at Rare Disease UK’s AGM last month (if not click here). Here Lisa talks about her preparation for the day and telling her story about two of her children who have undiagnosed genetic condtions.

Lisa and her family are members of SWAN UK, and Lisa is also Parent Rep for North Yorkshire.

‘Since I am writing this in the week that David Bowie died :( it seems more than a little appropriate that I get to use these iconic words in a blog post (thank you Let’s Dance)… Ironic also that I had already planned the title of this piece before news of Mr Bowie’s untimely passing broke.

Next week I have been invited to speak at the AGM for Rare Diseases in London at The Royal College of Paediatrics and Child Health in the context of being a parent of an undiagnosed children. Gulp.

To say I am more than a bit nervous is like saying that water is a bit wet……I really hope I can do justice to the community of parents/carers and children that compromise the medically/physically/cognitively complex, be they diagnosed or undiagnosed. To get our message across about the lives we lead and the many roles we have. It’s no biggie right? I’ll just imagine all the audience in their undies or something whilst I stand up and spout words of blahwisdom.

Having been invited to speak at the AGM not long before Christmas, I convinced myself I had plenty of time to write something EPIC but with Christmas hols, small people and large people around (not a size reference, honest, we had family staying) over the festive season, time got away from me and there were other more pressing matters to attend to (that wine wouldn’t drink itself you know).

I promised myself once the children had gone back to school I would settle to the task but hadn’t then banked on having “writers block”. I don’t really consider myself a writer per se (sounds far too grandiose) but I knew with an event like this, I couldn’t really just stand up and wing it without something concrete to go on, even if that was only notes.

By the early part of this week, I had got as far as “Good Morning” and then found myself distracted by e-mails, Facebook, adverts, the sun light on the wall, what to wear – you know, anything basically other than committing pen to paper or in this case, key stroke to page.

It occurred to me having been given a fairly open brief and a speech timescale of 10 to 15 minutes that I had absolutely no idea what that looked like on paper. So that gave me another few minutes to play on google in the name of “research” and I discovered that somewhere in the region of 2500 words should cut it. Of course that threw me another dilemma: how fast do I read/speak???

Not being well versed in the art of public speaking but having been involved with theatrics in a previous life (theatrics?? you never would have guessed that would you?!) I know that it’s imperative to speak clearly and relatively s-l-o-w-l-y to get your point across and ensure your audience has understood and is engaged with you. So my usual style of 90miles a minute conversation (I even leave MYSELF out of breath) at times, wouldn’t cut it.

Nonetheless, all the vagueries of word counts, words per minute and such like were not getting me any closer to getting anything worthwhile written down. So then I decided that as I needed to use some family photos to frame my discussion around, that would be a good way of knowing what I wanted to convey and therefore a good place to continue my research.

It hit me as I explored the files on the lap top just how many gazillion or so photos and videos we have taken over the years. Far from helping however, this just distracted me still further. For the most part, it was a lovely stroll down memory lane but punctuated with pinpricks of poignancy. It also highlighted our abundant lack of organisation since photos of kids were mixed in with cats, cars, sunsets and mobile downloads but nothing in the latter years was organised so that I could find anything I actually needed or relevant to the job in hand!

So after several hours on the laptop, I had accomplished nothing more than alternating between whimsical nostalgia, smiles and a few blurry eyed moments (must have been the dust) but not anything worthwhile to bring to the event. Hmmmnn…

I was fairly sure that although the subject matter was essentially down to me, waffling on about the benefits of chocolate being an anti-oxidant (honest, it’s on the internet so it MUST be true!) was not entirely the content that The Rare Diseases Org had in mind when they wondered if I would speak of my experiences.

But back to where to start, how to begin and how to convey such a very important message about dealing with the complexities surrounding family life and to give a snap shot of all us families in a similar situation? The more I thought, the less I knew where to begin. How do you explain the hopes, dreams, worries, fears? How do you bring out the highs, the lows, the triumphs and tribulations and yet not make yourself or your family an object of pity or woe is me?

And then I took a breath and realised I cannot speak for everyone. I cannot pretend that I have the same experiences, difficulties or successes as others. I can however speak as honestly as possible about our day to day lives in the hope that it might give a small snapshot, an insight and an overview and that gave me my voice, my focus for the piece.

I hope that in some small way it might humanise the process, certainly to the medical professionals who while however compassionate they may be, for the sake of their sanity and jobs, can really only think about us as long as we are in their consulting rooms or wards, operating theatres and such like. They cannot contemplate that before we arrive in their domain, we may have organised a plethora of tasks that make a popstars rider look like easy pickings. Other children that we have farmed out to willing family and friends so that we can attend their appointments, PE kits that we have painstakingly washed and ironed for 3 days hence with sticky notes on so they go to school on the correct day because we will be in-patients for a week or so. The lists of who eats what foods on what days and suggested alternatives in the event that child a, b or c throws a wobbly and proclaims they DON’T EAT THAT…EVER… The last minute spray of perfume on a kleenex so that the child having a teary moment because you are leaving AGAIN can be comforted by your smell.

So trying to communicate that angle of my life seemed like a very good place to start and funnily enough once I had begun, the words just flowed. Whether they are “good” enough, powerful enough, emotive enough, I have no idea, but they are honest, they are my day to day and certainly reflect a lot of the experiences that other special needs parents have highlighted to me so they will have to do. 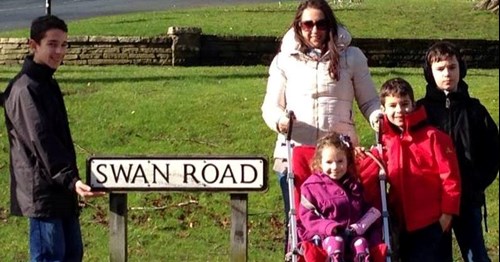 I’m still trying to wade my way through photo’s to add in and also finding some copy right free visual images to jazz it up a bit in the background but my biggest conundrum now is definitely what to wear (that’s very tongue in cheek for the avoidance of doubt!) What I do know for sure is that I have a pair of kick-ass red shoes that always make me feel fab, no matter what I am doing. So aside from whatever else I end up wearing, let’s put on those red shoes and whilst I definitely don’t think I’ll be dancing or doing a jig, it’s always up there if I get “speaker’s block”….jazz hands anyone?’

To find out how it went keep an eye on our blog for a follow-up from Lisa.