Getting a diagnosis: Reuben and Faith

I’m Jenni and my husband is Warren. We have four children – Leo 14, Lucas 11, Reuben eight and Faith two. We live in East Lothian, Scotland right by the coast.

We have two children with different rare genetic conditions, Reuben and Faith. Reuben always has a smile, is always eager to help around the house or school, loves music, the beach and being outside in our back garden. He is also obsessed with McDonalds! He hates anything dressed up, hand dryers and going to really busy places. Faith is a feisty wee girl who likes to boss her brothers around, she loves being outdoors, loves playing with her dolls and pretending to have tea parties. She hates spiders, monsters, the dark and being on her own even for a minute.

Reuben’s biggest accomplishment is learning to speak at the age of five. Although he is unable to communicate his needs he can say a lot of things. Faith is an amazing signer as she is profoundly deaf so she has learned to communicate efficiently through British Sign Language and is currently trying very hard to talk too.

Reuben has severe learning disabilities, hypermobility, brain abnormalities, persistent ear issues including infections, intercranial hypertension which is currently in remission, sensory issues, incontinence and autistic traits. The most significant issue is his severe learning disabilities as it impacts on every aspect of his life. Faith is profoundly deaf with bilateral implants, sensitivity to the sun, sensory issues and language delay. The most significant of them all would be her sensory issues as they cause problems and lots of tears from her.

With both Reuben and Faith we realised things were going to be different when they were six weeks old as they both had delays.

Before having a diagnosis the unknown made us question everything, blaming ourselves for possibly causing the issues during pregnancy and feeling alone as there was no one who knew what if felt like going through test after test only to be told it was negative or inconclusive. 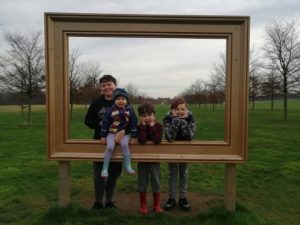 Fighting to get proper support without a diagnosis is hard. The constant hospital appointments meant we all had to adapt around them, my older kids spending days in waiting rooms.

Reuben was entered into the Deciphering Developmental Disorders (DDD) study just before he was two years old and we got a diagnosis when he was seven years old. Faith underwent specific genetic testing due to her symptoms at three months old and she was diagnosed at 14 months old.

In Reuben’s case getting a diagnosis has made no difference at all because nothing is known about it as it’s extremely rare.
At the moment there are only seven people with the same mutation. More research is needed so we have no idea what the future holds for him. We are still living with the unknown. With Faith it made it easier as it gave answers to all her issues. Although it’s rare there are a lot of other children with the same condition so we are able to speak with them. Also it meant that I got a diagnosis myself as I have the same condition as her and it’s prepared us for future generations having the same condition.

The best thing on our journey so far has been finding SWAN UK and discovering that we aren’t alone, that there are others like us who live with the unknown. The support has been invaluable.

My mum read a newspaper article about a little girl who was undiagnosed and gave me the article as there was a link to the SWAN UK Facebook group on it. Since being members we have received invaluable support and a wealth of information. We have made some amazing friendships and are no longer alone.

PrevPreviousGetting a diagnosis: Our story
NextMore than carersNext