Hi, I’m Emma. I have five children – William, Alfie, George, Arthur and Nellie who is undiagnosed.

I saw a post in the SWAN UK Facebook group in September 2015 asking us to contact our Members of Parliament about joining the All Party Parliamentary Group (APPG) on Rare, Genetic and Undiagnosed Conditions. I sent my MP, Stephen Twigg, the information thinking I had done my bit and I certainly didn’t expect any response. How wrong I was! Stephen Twigg MP not only replied but said he would join the APPG. A few days later he contacted me to say he had joined and hoped we could meet up in the future. I was so pleased but didn’t think too much more about it.

Then, two years later another post in the SWAN UK Facebook group caught my eye. Dare I push my luck and contact him again? I forwarded Stephen Twigg MP a link regarding Genetic Alliance UK’s (the charity that runs SWAN UK) Pledge for Patients, a campaign to help ensure that those who were elected would support patients and families affected by rare, genetic and undiagnosed conditions once in office, asking for his support. Once again he not only responded but signed his name to the pledge.

In October last year I read that Stephen had become one of the co-chairs of the APPG, and thought how fantastic it was he had got that involved.

Fast forward to April 2018 and I received an email from Genetic Alliance UK about an event happening in London on 9 May and asking if I would like to attend and hopefully meet Stephen. I received more details and roped in my husband – hey we were going to Parliament!

I had no idea what to expect and to say I was nervous was an understatement. Peter and I travelled down by train and got ourselves to Parliament. We took our tourist selfies and then realised we actually had to go in! I’m surprised we got any further because of the antics Peter got up to at security – please note if you remove your belt for security reasons remember why it was there in the first place – to hold up your trousers! Once our visitor lanyards were in place, off we went. The event we attended was held by Rare Disease UK (a campaign run by Genetic Alliance UK) to launch their report on living with a rare condition and the mental health impact. We were introduced to Stephen Twigg MP and spent some time chatting and having some photographs taken. 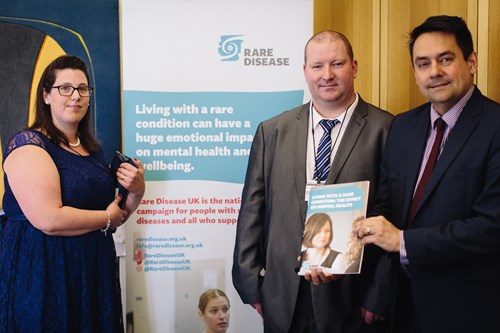 Stephen then asked us if we would like to look around Parliament while we were there and we of course said we would. He proceeded to then personally take Peter and me on a tour telling us the history of the building and answering our questions. We were given special passes into the House of Commons gallery where we watched a debate which was amazing and such a surreal experience.

We truly couldn’t thank Genetic Alliance UK and Stephen Twigg MP enough for taking time out of his day for us. Nothing was too much trouble and he was very easy to talk to. He conveyed to us how vast the issues are around rare, genetic and undiagnosed conditions, and how he is learning from being involved.

I truly felt so proud that a simple message a couple a couple of years ago had lead to this. It proves no matter how small or insignificant you think something is it really can help make a difference.

If you have a child with an undiagnosed genetic condition and would like to join SWAN UK please visit undiagnosed.org.uk/join or email: [email protected]