How do I describe Riley? In a few words, he’s a comedy genius … well, he thinks he is! He is the smiliest, happiest boy I have ever met and he doesn’t let anything get in his way, which is his strongest attribute by far. He loves football, trains and watching sport, any sport. His main hobby is winding up his brother and sister and then making them laugh about it.

Since the day he came to us, eight weeks early, every day, milestone and doctors appointment has been a huge accomplishment. But for us as a family, I think Riley being able to start a dual placement at school has been huge. He attends a speech and language provision twice a week and mainstream with support three days a week.

We honestly didn’t think that he would be able to start school but his sheer determination at life has proved us all wrong and he continues to amaze us every day. Another massive thing is that Riley became a Beaver this week. He was so happy and proud, it was amazing. 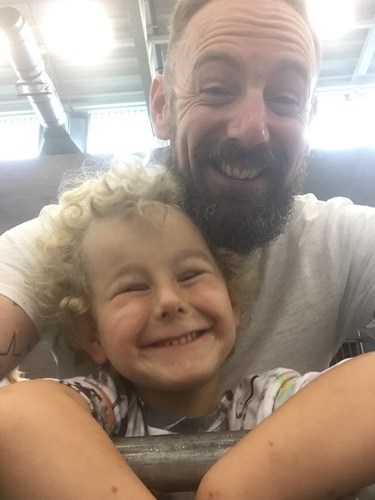 Riley has really low muscle strength that affects his everyday life. He struggles to control his throat and he will aspirate a lot, which can be scary at times. Your voice is controlled by muscles (which you don’t think about) and this means he can really struggle to speak and form words. He can walk but not too far without getting really tired and he has no bowel sensations.

He has had squint surgery twice, a tongue tie correction, and sees a foot and eye doctor to ensure things don’t get worse. There is suspected dyspraxia but we’re still waiting on that.

We are currently three years into the Deciphering Developmental Disorders (DDD) Study with no results but we are still hoping that there will be an answer – not an answer so we can label him but an answer to know what to expect in life.

We don’t know what the future holds for him and that’s the scary thing. With a non swan you can somewhat predict the future, even though you don’t know you’re doing it. You presume they will go to school, be in Christmas nativities, go to high school, get into trouble, be grounded, get a partner, go into higher education, get drunk, possibly get married and have a family of their
own but with Riley we just don’t know.

Riley was born eight weeks early so we always knew he was going to be a pain but things started to become more obvious when he wasn’t hitting his milestones, even with his adjusted age.

He didn’t smile until he was four months, sit unaided until fourteen months and crawl until 20 months. At first all we heard was that he will catch up or he’s fine but as a parent you just know. It wasn’t until they wanted to discharge us from the hospital that the paediatrician started to listen.

We spelled out all our concerns one by one and the look on the doctor’s face just changed. He understood that something was different about Riley and it wasn’t just us, as parents, being over protective.

From there things did change. We all know what it’s like, test after test, after test, after test. At first, it felt like we were getting somewhere but as each test came back as ‘inconclusive’ or ‘within normal limits’ it got harder to hear that he’s just a ‘medical mystery’.

Having a swan impacts on every part of your life – some that you don’t realise until much later. As a family, we have had to adapt but then that becomes your normal life. One example that stays in my mind is a time a friend of my eldest came round for tea and just sat there in amazement watching everything unfold: Riley having to be in high chair at four, him using Makaton to talk, with
his brother and sister perfectly understanding and then a choking fit taking place that everyone just dealt with. For us that was a normal Wednesday tea time, for him it was a whole new world.

It is thinking the worst but we just don’t know if he will have a shortened life span, will he find love, will he have friends and be in a school production? This is my biggest fear, I just don’t know how long I have with my lad.

As a couple, we have lost a large number of friends because of them not understanding why Riley is like he is, that we can’t just do things other families can as we need to take his needs into consideration and that he won’t just ‘get better’. This has been one of the hardest areas to deal with.

My biggest sadness honestly comes at times of immense pride: when his older brother turns down trips and opportunities as he knows Riley can’t do them or when his younger sister takes care of his personal needs. They’re children and shouldn’t have these worries in life but they love him so much they understand that he needs the support and sometimes that means they can’t
do what they want.

As a swan dad, I do think we can feel really isolated and powerless. I know we all feel isolated, but as a dad you should be protecting your family, fixing things, making things better and you just can’t. You don’t know what’s wrong, how to help, where to turn, who to ask for help.

It’s not really a conversation you can have at the gym, pub or work. Can you imagine: ‘Did you see the football? That was never a goal and oh by the way I have no clue what’s wrong with my son . . .’

Will a diagnosis make things better or easier? Honestly, I don’t know. It will give us access to different support, people will try and understand more and we will have some answers about the future but it won’t change Riley: he will still be the comedy genius he has always been.

The journey with Riley has been a bumpy one and I expect it will get worse as we move forward, but I can honestly say SWAN UK has been a lifeline. When you first start hearing that doctors haven’t got a clue, you feel like you’re the only person this is happening to and don’t know that there is a whole community out there in the same boat as you.

SWAN UK not only offers support for Riley, but understands that this affects the whole family. The family trips and stay and play sessions are amazing, where, no matter the issues, it’s just normal that everyone is different and it’s cool to be in it together as families and not individuals.

I would recommend SWAN UK to any dad. We don’t have to sit there and talk about the stuff that’s stressing us. We can just share a knowing nod and understand we are going through the same thing.

This is the first time I’ve shared most of this outside my family and it has been hard to write as it makes it real but hopefully it can help other swan dads know we are all going through the same thing.