Hi, our family consists of me (Rob), my wife Stephanie and our two boys, Max and Leo. Max is four and a half. He has a number of eye conditions and has global development delay, however, we have never received any official diagnosis.

Max is a really happy little boy. He loves music, toys with buttons that light up and make sounds and he also gives great cuddles and enjoys one-on-one playtime with his family. He also really enjoys swimming and loves being outdoors, especially when it is windy. He dislikes unfamiliarity and is often startled easily or can become upset.

Max was born with Bilateral Congenital Cataracts and Microphthalmia (small eye). This means that his eyes are not fully developed so even after the removal of the cataracts the Microphthalmia means he will always be visually impaired. He is registered as blind as without wearing his contact lenses or glasses his vision is extremely poor. It means that his visual world for detail has been limited to perhaps a foot away from him for the first few years of his life, so things need to be close to him in order to see them clearly.

As a result of his operations he developed Glaucoma in one eye, so he is now sensitive to bright light outdoors. He also has Nystagmus which means that when he’s without his glasses or lenses, his eyes have a noticeable wobble – this is more so when he’s tired. Max is also hypermobile and has global development delay so he is non-verbal and cannot walk or stand independently. He is often restricted to a wheelchair or buggy when out and about. Being non-verbal is frustrating for him and us with regards to communicating with people; you can often see he is trying to tell you something and we are not sure how is understands the world. I would love for Max to be able to talk and show that he has an understanding of what is happening as it is still so difficult to know what he is thinking.

All of the standard genetic testing has come back negative so we still have no diagnosis, but we have recently joined the 100,000 Genomes Project. We hope that one day we will have a diagnosis not so much for peace of mind (as a diagnosis will not change Max) but because it might enable us to be able to understand more and meet his needs and requirements. A diagnosis may also help other families in the future.

When did I know that things were going to be different? I can remember all of this very vividly: The nurses at the hospital were doing the 24 hour checks and were struggling to see a red reflex on the eye test. I started to worry at this point and felt very helpless and out of control. However, after a paediatrician said they could see a faint one, I was hopeful that all would be ok. We were advised to get a second opinion from an ophthalmologist a few days later in case he had cataracts. After having his eyes looked at by a few people it was not only confirmed that he had cataracts in both eyes, but his eyes were also smaller than normal. The Consultant explained everything to us and the fact that the only option for him to be able to have a chance of sight was to have his natural lenses removed from both eyes and for him to then wear contact lenses.

Steph and I were both shocked and overwhelmed and just about able to hold it together on the drive home. I completely lost it as soon as I got through the front door. I thought, why him? Why our Maxy? We were devastated and I think this was the point where all of the various emotions started to manifest: How will we cope? What kind of life will he have? How the hell do we tell our family he may not be able to see?

Over the years and overcoming numerous operations, sight tests, contact lens training (which my wife was amazing at), it became apparent that Max also had learning and physical disabilities. We had now got to the point of his eyes being the least of our concerns and it now being about his overall development, lack of mobility, quality of life and level of understanding.

Not having a diagnosis makes medical appointments difficult as it’s hard to find the exact thing he needs. A diagnosis means people would perhaps know where to go, what tests to do and how best to help him rather than it feeling like we are just ticking off another box.

I find it very difficult to speak to other people at times and have found that as I do not know many people who have children with special needs, it is very difficult to explain to people how difficult at times it can all really be. I think as men, we often avoid showing our emotions so we try to avoid opening up for fear of the response.

When Max was born, a lot of my friends also had children, and I found it difficult to talk to them as I could not help but be a little bit bitter about what we were going through compared to everybody else. I know it is wrong to feel like this, but sometimes your emotions get the better of you and even though you know you should not feel like this, it still happens. I often found it really difficult to be around other parents with children without disabilities. I often feel isolated, anxious and that I am not in control.

In the beginning I was a ticking time bomb of emotions. Initially I was excited at the thought of my baby son, and then I felt crushed, angry, bitter, sad, happy, and scared: Will he ever see? Can he see me? Does he know I am his daddy? I had some really horrible thoughts too that I am ashamed of.

These were mainly along the lines of ‘what’s the point?’ I could not help it. Over time I learned to cope but then when it became apparent there were more issues, I immediately began to think of things such as, will he ever walk? Will he ever talk? Will he be able to have a job? Will he ever fall in love? Will he eventually lose his sight? These are the kind of things you should not have to think about. I am positive on the whole and once you realise that you are not alone and people can help, it definitely makes things easier. When you seeing Max achieve even the smallest things, like picking up a small object, feeding himself, moving into another room by himself or reaching out for a cuddle when I get home, you really learn to appreciate things more. I think having our second son Leo who at present appears to have no health issues, brings us some balance as a family.

Max has come through numerous operations and bounces back every time. His accomplishments include: starting school, pressing his BIGmack switch to communicate and starting to move in his Rifton Pacer Gait. He’s also been learning to move independently (by bum shuffling). He would normally always need a toy to motivate him to do this but now he will move into different rooms to explore, which is great and he seems to really enjoy it. I would say that the biggest accomplishment was recently, when, not only did he look at the pictures during his latest vision test, he also reached out to the picture. This was the first time he had ever done this and we were all amazed! I think it showed that maybe his level of understanding is starting to improve. It was brilliant.

I think that Max has made me realise how much I take for granted and when he is happy it really fills my heart with joy.

Seeing him in his school uniform for his first day at school was amazing and I was really proud. But also having him walk along with me at his fourth birthday party in his Firefly Upsee was amazing. I had to hold the tears back. 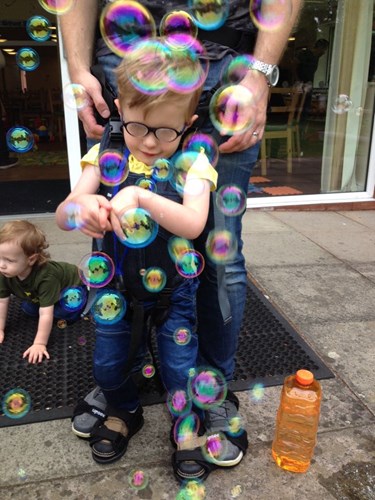 I feel positive about the future because I can see how happy he is, and we do have some great times as a family and he will always light up any room he is in. I am also worried and nervous though as he does need a lot of care and it worries me how we will cope as he gets heavier and we get older and eventually when we are no longer here or able to look after him. What happens then? I imagine most parents have those thoughts.

Being a SWAN UK member means I’m able to hear stories from people who are going through similar challenges or lifestyles and hear their thoughts and how they cope, let off steam, and what challenges they face. It is good to converse with people who understand how challenging it can be. I hope to be able to help other people and maybe also develop some new friends via the SWAN UK.

It’s nice to know a SWAN UK is out there doing some important work, raising awareness and giving you the ability to easily speak to other people in similar situations and find a voice to talk about things.

I have chatted to some other swan dads in the SWAN UK members’ Facebook group and I am looking forward to a dads’ meet up in the New Year. I’d tell other swan dads looking for support to go for it and join SWAN UK – you have nothing to lose. You will find other people going through the same kind of issues, in their own unique way and it will give you an opportunity to discuss your feelings, emotions, and also maybe get some good advice.

This is my first time sharing my story in detail. To be honest I could have added loads more – maybe I should release a book. It has been emotional writing some of it as revisiting some of the feelings I had bring back some tough memories, but they bring back some good ones too. Overall it feels good to share and I hope this might encourage more to do so.