I’m a little bit in love with Alex right now.

I mean … if it’s possible… I love him even more than I did before.

That’s ok for me to say, right?

We love our children to the moon and back but, well, recently he’s just nudged our moon a little further away. Filled my heart a tiny bit more.

I think it’s because we’re learning more about him. As he’s able to move, he’s able to show us what he likes (opening and emptying cupboards), what he doesn’t like (not being able to go outside…), which parts of the house he likes spending time in, which… not so much.

I love to watch him move.

I love that he will stand at the table as we put his seat behind him – as you would someone at a restaurant in a bygone day. How he’ll sit down and, using his hands, ‘shunk’ himself backwards so we can put the lap belt across.

I love that if the wheelchair got left in the car, instead of my swearing at whoever did that (it obviously wasn’t me…), running out to get it… he’ll now hold my hand and walk to the car with me, anticipate the door opening, move out of the way and then let me hoik him (in a somewhat ungainly fashion) into the car seat, move his arms to put the belt across, know when to move them so they don’t get trapped.

When I get him dressed he helps by putting his arms up to get his top off and head through and arms through when he gets his new top on. He does not have cotton wool arms. He knows what to do. He anticipates.

I love putting him to bed. Previously I had to lift him, move him, position him, now… standing up holding my hands… we do a sideways crab-like dance up to the bed, he turns, I help him sit down, then he will use both hands to shift himself back, turn, lie down… wriggle till he’s comfortable and then, when I hand him his quilt, he’ll pull it up, right to his face, because he loves the feel and security of it. 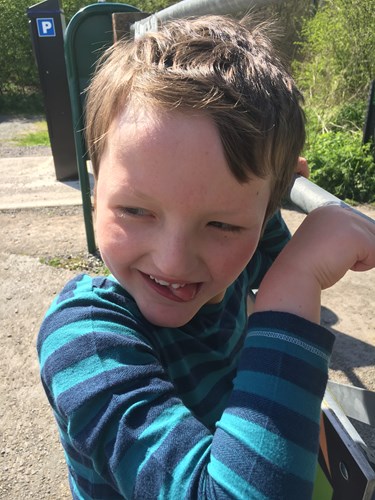 So suddenly… There’s Alex. Suddenly – though not suddenly at all – showing he can do it by himself…and the bits he can’t do himself, that he’ll let us help and he’ll help us so the thing gets done.

Not being passive in his life, but participating.

It becomes a two way interaction.

And with that communication of wants and needs comes an understanding between the two of you. Which, when you’re a parent of a child with disabilities, you come to hold quite tight.

PrevPreviousWe are the 57%
NextSTAY AND PLAY AT ALAN SHEARER CENTRENext