What are chromosome translocations?

This leaflet discusses what chromosome translocations are, how they are inherited and when they might cause problems. This information is designed to be used alongside the discussions you have with your child’s genetic specialist.

What are genes and chromosomes?

To understand what a chromosome translocation is, it is helpful to know about genes and chromosomes. Our bodies are made up of millions of cells. Most cells
contain a complete set of genes. We have thousands of genes. Genes act like a set of instructions, controlling our growth and how our bodies work. They are responsible for many of our characteristics, such as our eye colour, blood type and height. 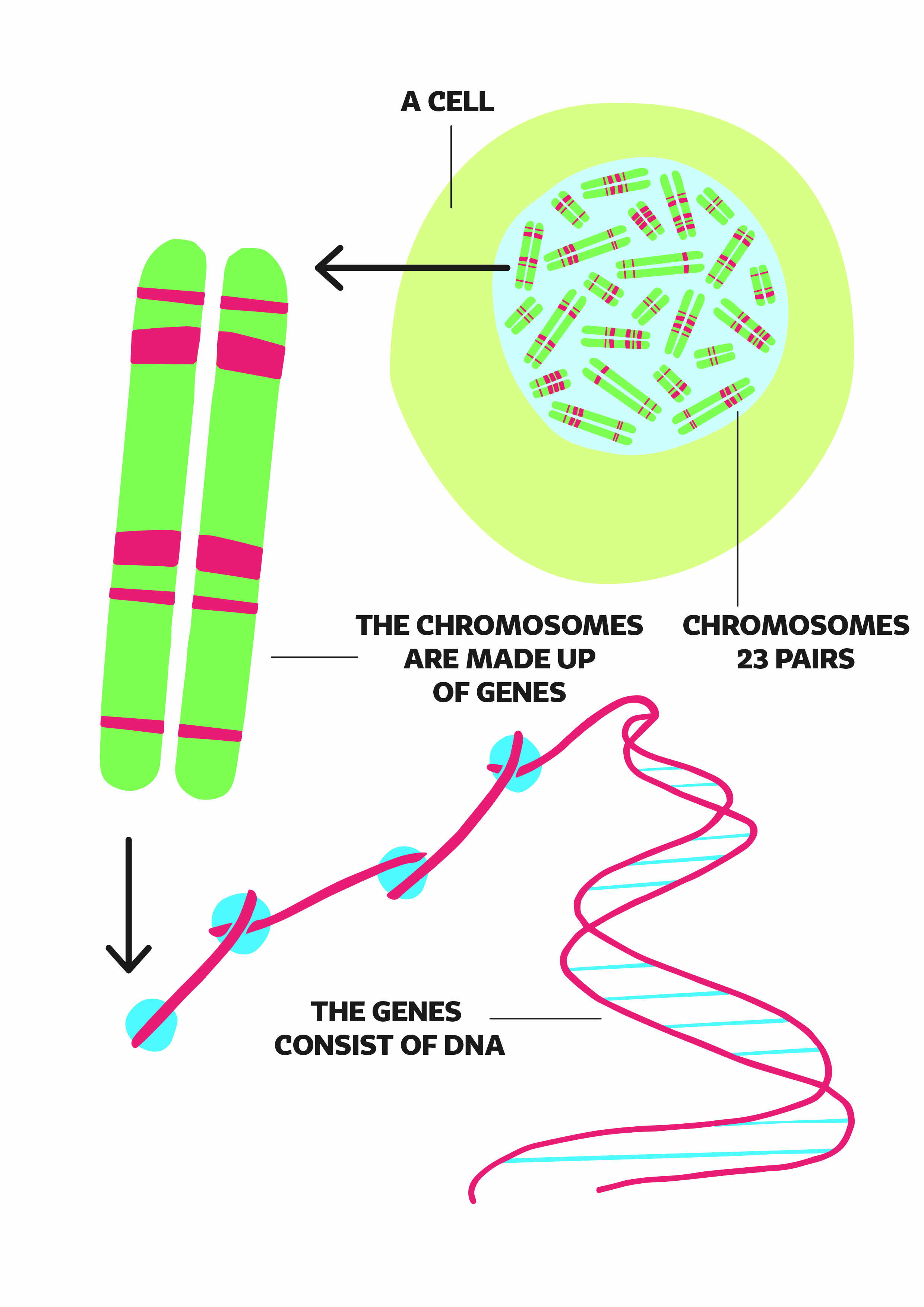 This picture shows a cell, DNA and chromosomes

Genes are carried on thread-like structures called chromosomes. Usually, we have 46 chromosomes in most cells. We inherit our chromosomes from our parents, 23 from our mother and 23 from our father, so we have two sets of 23 chromosomes, or 23 pairs.

It is important that we have the correct amount of chromosome material, as the genes (that instruct the cells in our body) are found on the chromosomes.
Having too much or too little genetic information can result in learning disabilities, developmental delay or health problems.

What is a translocation?

A translocation means that there is an unusual arrangement of the chromosomes. This can happen because:
a) a change has arisen during the making of the egg or the sperm or around the time of conception
b) an altered chromosome arrangement has been inherited from either the mother or the father

A reciprocal translocation occurs when two fragments break off from two different chromosomes and swap places. 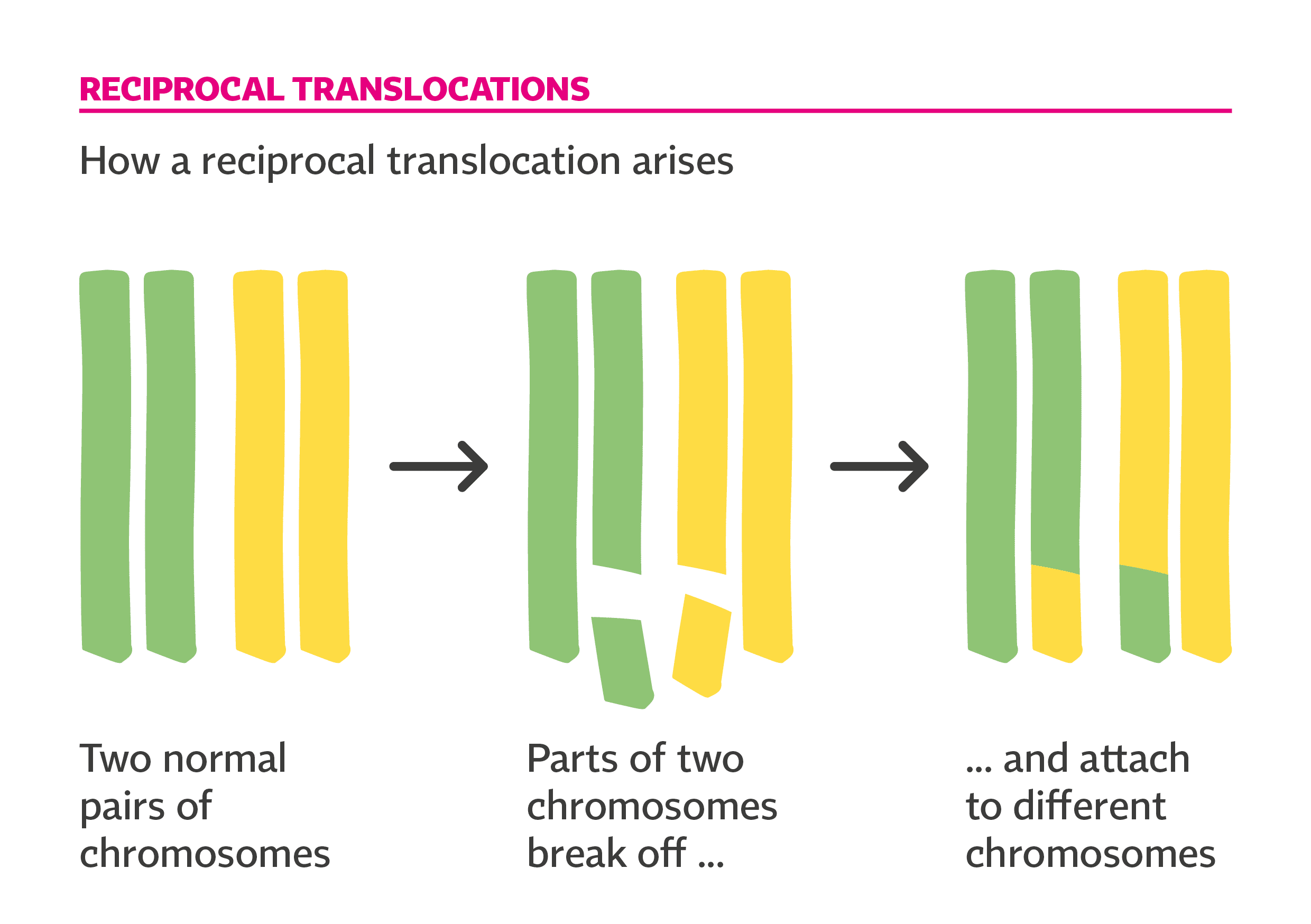 This picture shows a reciprocal translocation

A Robertsonian translocation occurs when one chromosome becomes attached to another. 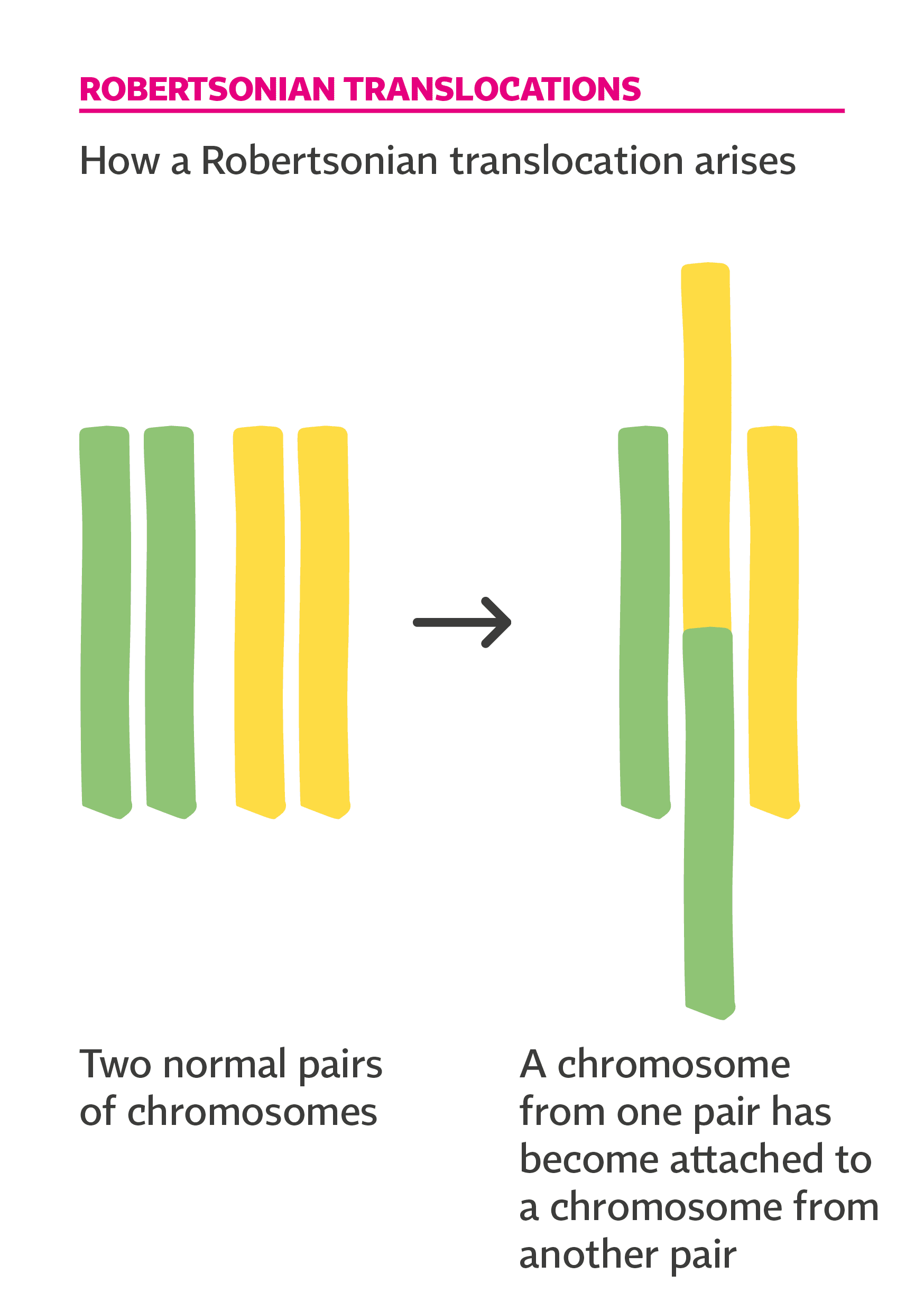 This picture shows a Robertsonian translocation

Why do translocations happen?

Although about 1 person in 500 has a translocation, we still do not really understand why they happen. We know that chromosomes seem to break and rejoin quite often during the making of sperm and eggs or around the time of conception, and it is only sometimes that this leads to problems. These changes occur without us being able to control them.

In both the examples we have looked at, the chromosomes have been rearranged so that no chromosome material has been lost or gained. This is called a balanced translocation.

A child who has an unbalanced translocation may have learning disabilities, developmental delay and health problems. The seriousness of the disability depends on exactly which parts of which chromosomes are involved and how much missing or extra chromosome material there is. This is because some parts of the chromosome are more important than other parts.

If a parent has a balanced translocation will he or she always pass it on?

Not necessarily, there are several possibilities for each pregnancy:

Genetic testing is available to find out whether a person carries a translocation. A simple blood test is done, and cells from the blood are examined in a laboratory to look at the arrangement of the chromosomes. This is called a karyotype test. It is also possible to do a test during pregnancy to find out whether a baby has a chromosome translocation. This is called prenatal diagnosis and is something you may wish to discuss with your genetic specialist.

What about other family members?

Some people find it difficult to tell other members of the family about the translocation. They may be worried about causing anxiety in the family. In some families, people have lost touch with relatives and may feel it is difficult to contact them. Genetic specialists often have a lot of experience with families in these situations and may be able to offer you help in discussing the situation with other family members.

First published March 2009. This leaflet was developed by Genetic Alliance UK, modified from leaflets produced by Guy’s and St Thomas’ Hospital, London; and the London IDEAS Genetic Knowledge Park, according to their quality standards. This work was supported by EuroGentest, an EU-FP6 supported NoE contract number 512148.

Reviewed and updated in January 2017 with help from Prof. Shirley Hodgson, Emeritus at St. George’s, University of London and members of SWAN UK (syndromes without a name) and Genetic Alliance UK.