Isn’t that how the saying goes? I have been itching to write this post for 2 weeks and I have had all the right intentions, however between the demanding children and their needs, and university work, and meetings, and appointments, plus trying to factor in sleep it just hasn’t happened! Until today that is.

A couple of weeks ago, whilst Rowan was an inpatient at GOSH, I got the opportunity to go to the Rare Disease AGM. I had absolutely no idea what that was, but, Lauren (from SWAN UK) invited me to support another SWAN Mum, Lisa (Click here to see Lisa’s blog), who was speaking. To be honest it’s everything I hate. People, strangers, new environment, and a real lack of what exactly it was, however Lauren can be somewhat persuasive when she wants to be, and off I went, leaving Rowan at GOSH with the nurses. It was time to practise ‘adulting’, but do I know how to be an adult? I wasn’t so sure!

We arrived at the venue, found where we needed to be, and got a coffee. There was a bit of ‘hanging around’…..which I believe other adults may have called ‘networking’ but, you know, I am new to this game, and yet to learn the rules! The AGM then began, there was quite a lot of paper! Lots of lists of names of attendees, and I think the thing that struck me most, was all these names, and then ‘who they were’ written next to them, there were lots of people from lots of different organisations…..I was sat in a room full of professionals, me, and them……..professional adults. Crap, I was still a beginner to this ‘adulting’ and here I had landed myself in a room of ‘professional adults’. I felt like a fish out of water.

However, Alastair Kent, who is the Chair of Rare Disease UK, began to talk. Rare Disease UK is an initiative of Genetic Alliance UK, in a similar way that SWAN UK is also an initiative of Genetic Alliance UK. Rare Disease UK supports those people with a ‘rare disease’ and SWAN UK supports those who ‘have no diagnosis’. There were technicalities around the AGM that went over my head, but the whole experience was mind blowing. As Alastair Kent began his speech, there was a realisation on my part, he GOT IT. Everything he said, was true. Everything we discuss, as parents, privately, within SWAN UK, came out of his mouth. I got goosebumps.

There was this big realisation that, SWAN UK, is not just a little desk in the corner of the room somewhere, in the dark. SWAN UK is a part of something far, far bigger than I had ever considered, going right up to the government.

Whilst living without a diagnosis does have some unique challenges, specific to a lack of diagnosis, there are also a number of similarities ‘no diagnosis’ shares with ‘rare diseases’ and this was echoed by Alastair Kent. A man I had never met, was talking about some of the struggles, and the complexities that we face.

There was a lot of technical information, lots of damning statistics, lots of comparatives from a previous AGM, case studies, a discussion about a new centre opening up at BCH, lots of very impressive adults, talking about very adult issues, and plans. And I just sat there in awe, inspired. I literally felt like the world just opened up, and I wanted to be a part of it, but how could I be a part of it? I was still only practicing at being an adult, and I don’t like people, and I don’t like new situations, and I don’t like anything that would be required to get involved in anything.

However there was this overriding emotional response to the day, that I just wanted to DO something, I want to be a part of something that was bigger than just me and the kids at home. I wanted to be a part of the change in those statistics, and I wanted to become more experienced at being an adult. Throughout this complicated, stressful, frustrating, journey with living with a child without a diagnosis, the times I have felt most proud, are the times my knowledge has helped someone else. I’m not talking about ‘solving’ someone else’s problems, but by fighting my way through the system, it means the next person doesn’t have to fight so hard. That is what I want to be doing, trying to make future generation’s lives that little bit easier. But how can I do that? How can I get involved in that? 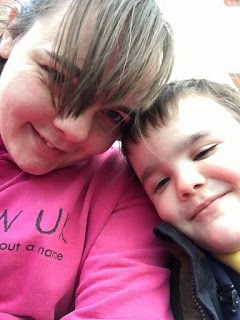 Thanks to the Rare Disease AGM, and Alastair Kent’s inspirational speech, I am tackling all those things I don’t like, all those things I struggle with, head on. I am going to be a part of the change, whether I like it or not. I’m not saying anything else about this right now, but watch this space …

And a big thank you to Lauren, without your persuasion, I would never have been inspired. You may regret this in the near future, but thank you for letting me practise at being an adult, for a little while. Who knows where this may take me!

And if you want to find out more about Rare Disease UK, here’s the link: raredisease.org.uk

If you’d like to share something on our blog, we’d love to hear from you. Please email [email protected]