Thanks to a cancellation, Hugh’s VNS surgery happened rather unexpectedly towards the end of August. With only hours to pack and get to the hospital, I didn’t really have enough time for the nerves to hit, or the realisation of what was happening to sink in. But that night after his bloods had been taken and we’d been prepped for surgery the next morning, I sat by his bed and began to think about what was in store.

Whilst I can’t deny a large part of me was anxious about the general anaesthetic and the operation in general, my overriding feeling was one of hope. Hope for an epilepsy free future. Or at least one where epilepsy didn’t completely rule (and often ruin) our lives.

I imagined being able to go on holiday as a family to visit Hugh’s cousins in Ireland; taking him to see where his grandparents (and great grandparents) were born, and where his dad and I spent all our summers as children. I thought about the beautiful beaches we’d visit, the rocky coastal paths we could stroll along. 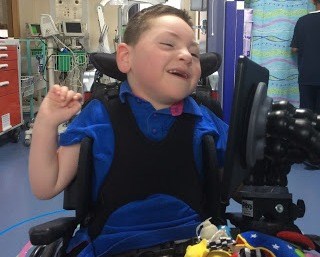 I imagined not having to plan everything around knowing where the nearest hospital is, without having to ‘risk assess’ every journey and constantly thinking about what you’d do in an emergency. Imagine driving without checking him repeatedly to see if he was breathing and without always planning where to pull in to resuscitate him, should the need arise.

I thought about Hugh having sleepovers with his brother at their friend’s house and how I could leave him to play with other kids without me constantly being there watching him, checking. I thought how his granny would love having both boys over to her house for a sleepover and how Stephen and I wouldn’t have to carefully plan how to use the allocated care hours we get so that we can go out together.

And I thought about the effects his seizures must have on Hugh. Almost every night for 10 minutes or more, his whole body stiffens and spasms. His legs and arms must constantly ache from that. He can lose seconds and sometimes minutes at a time during his regular absence seizures too – how confusing must that be for him? Every few months he has clusters of seizures that terrify him – he screams and cries in pain and fear. I’d love nothing more than to never see that terror in his eyes as he looks at me pleading for it to stop and I’m powerless to do nothing other than sedate him. The huge apneoic seizures (where he stops breathing) that I live in fear of, threaten to starve his brain of oxygen, threaten to kill him each time they happen. He’s lost skills in the past because of them – the ability to swallow, the ability to smile. He’s managed to relearn lots of things but each apneoic seizure threatens to damage his brain and take away those skills he’s worked so hard for. When he does, thankfully, recover, he is exhausted and will sleep for hours. Imagine him never having to go through those again?

Of all the aspects of Hugh’s numerous and complex disabilities and health needs, his epilepsy is by far the most challenging. Without it, life could be so much better for him and for us.

VNS therapy is our last hope at getting rid of that evil demon from our lives once and for all. As I sat, watching him sleep peacefully, I felt hopeful that this was our miracle, the thing that would change Hugh’s life and I prayed to God that it would work.