Each year 6,000 children in the UK are born with a genetic syndrome so rare that it is likely to remain undiagnosed. In 2010, my second born son, Hugh, was one of them.

Back then, I didn’t know undiagnosed genetic conditions existed. Back then I was naïve enough to assume that if a child presented with physical or learning difficulties, they would be seen by a doctor who would refer them for further testing. Back then, I assumed those tests would reveal an answer, a cause, a diagnosis.

But we went to the doctors, we had the tests and the only answer we received was a great, big ‘don’t Know (but it’s definitely a genetic syndrome of some sort)’.

Where were my tribe then? My support group? My information leaflets? Where should I look for support and guidance?

We were lost and alone.

30 April is Undiagnosed Children’s Awareness Day. And this year it’s a big one as SWAN UK (syndromes without a name) is celebrating its 10th birthday!

SWAN UK sprung to life as a Facebook group for parents and carers of undiagnosed children in 2011. We were there! Right at the beginning! I was member number 10, I think.

We were a small, tight-knit bunch of families, spread throughout the UK with children so diverse and with such varying needs it was hard to see what we had in common. Yet what united us was the very thing that excluded us from so many other sources of support and information: our lack of diagnosis.

Online initially and then face to face our friendships grew, the care and understanding I received from those like-minded mothers was immeasurable. And those bonds of friendship have stood the test of time.

Diagnoses have come to some of our group. Mostly rare and ultra-rare conditions. Hugh now has a diagnosis of FOXG1 syndrome of which there are around 700 diagnosed cases worldwide. Others have been diagnosed with conditions where there are less than 10!

In fact, Hugh’s diagnosis is thanks to SWAN UK – it was following one of their twitter takeovers, which I had hosted, that I was contacted by a genetic counsellor to take part in a research study in America, where he was eventually diagnosed with FOXG1 at eight years old.

SWAN UK, and the friends I made through them, supported me through some of the toughest times of my life and have been responsible for so many wonderful memories and fantastic opportunities.

Here’s just a snapshot of some of them: 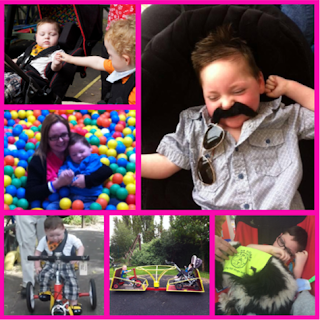 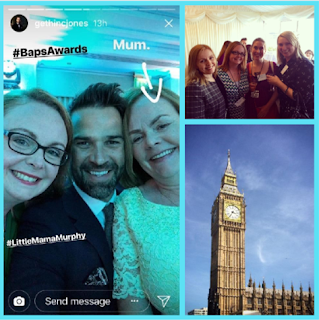 and meeting Gethin Jones (and he added us – that’s me and my mum – to his Instagram stories). I only started blogging because of SWAN UK. At the All Party Parliamentary Group for Genetic, Rare and Undiagnosed Conditions at the Houses of Parliament with some pretty fabulous women – left to right: Tania from Special Needs Jungle, (Me), Vaila from The Inclusive Home and Alison from Complicated Gorgeousness. 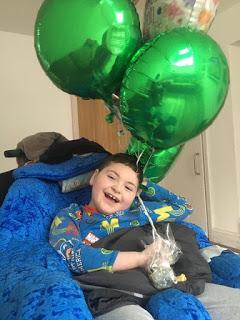 Hugh loves a balloon and has received balloons several times from SWAN UK when he has been ill or been in hospital. It has always cheered him up.

Whilst Hugh is no longer undiagnosed, SWAN UK is still, and always will be, a big and important part of our lives. So please join me in wishing SWAN UK a happy #BigBirthday this Undiagnosed Children’s Day. And please donate, if you can, to help them support more families like ours.

As published on Little Mama Murphy.