In September SWAN UK member, Claudia Beard spoke at an event on the 100,000 Genomes Project hosted by Southern Health in partnership with Wessex Genomic Medicine Centre. Here is her speech about having a child with an undiagnosed genetic condition.

Good evening everyone, my name is Claudia. I am here tonight to talk to you about my special little boy, Trent, but first, allow me to introduce you to my family.

I am married to Warren, my high school sweetheart. We’ve been married for over fifteen years.

We have three gorgeous boys. Broden is eleven and is a sensitive, anxious, thoughtful, street-dancing young boy who loves to read. Broden has ADHD.

Chase is five and he is an energetic, hilarious, fun-loving, fearless little boy. He loves games and dinosaurs and power rangers. He is so confident and stubborn and he will rule the world someday.

Trent is four years old. He is a paw-patrol obsessed, stone-playing, swing-loving boy. Trent is our special boy – our swan. 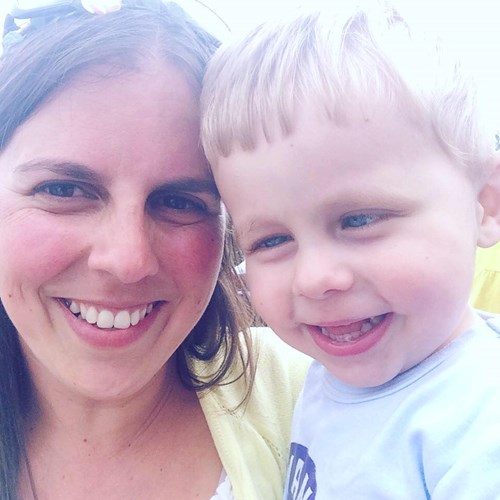 What we do know about him is that he is non-verbal, has global development delay and is hypersensitive when it comes to food. He has a hiatus hernia which caused a lot of his reflux, making him vomit anything from two to fifteen times a day when he was younger. He is severely autistic.

We also know he has undiagnosed brain damage, and that is where it gets difficult for us as parents and as a family.

But let me take you back and tell you how our journey started when Trent was born. I had a very normal pregnancy, very little morning sickness, unlike my pregnancies with Broden and Chase and I wasn’t very big with Trent either – again this was unlike my pregnancies with Broden and Chase.  He was surprising us right from day one – you see, we weren’t prepared for a boy. At our 20 week scan we were told ‘he’ was actually a ‘she’. So, we mentally prepared ourselves for having a girl. This took a little while; we got rid of all the baby boy clothes and got a lovely ‘girl’ nursery ready.  We were ready for our little girl, but out popped, and I mean popped, our beautiful little Trent.

It was a very quick labour – two and a half hours from when the contractions started to when I was holding my little man. There weren’t any complications and his APGAR score was perfect. There was nothing to give us a hint of what was to come.

We then started noticing Trent wasn’t hitting certain milestones. His arms were unusually stiff. He didn’t uncurl as babies do. We had to physically pull his stiff arms out when trying to dress him and he never played with any toys.

As time went on other milestones were missed such as playing with some toys or reactions to these toys. He didn’t sit completely unaided until he was about ten months old and he didn’t start crawling until he was sixteen months old. Trent didn’t walk until a year ago and he still has a very immature wobbly walk and he can’t walk far. Trent can’t tolerate lumpy or textured food. It has only been within the last six to eight months that he is tolerating the very soft, most pureed texture food you would give a child at the second stage of weaning.

Our next diagnosis was Periventricular Lukiamelasia.

This was after an MRI scan. So brain damage was confirmed. But apparently the PVL diagnosis was not consistent with Trent. He had the first MRI when he was about one and a half. We had another MRI scan about six months ago and apparently the PVL is no longer there but he has damage in another part of the brain.

This has been really hard for us as we can’t seem to get a clear understanding as to what has happened, how it has happened and what it will mean for his future.

We were referred to the 100,000 Genomes Project by Trent’s neurologist. The fact that there was new hope after all the other tests we have put Trent through was exciting. We had our appointment with the geneticist at Southampton Hospital in November 2015, and we have been waiting since to hear something, anything, that will help explain more about Trent.

So, what can I say that gives you an idea of what it is like to have a child with no diagnosis? What can I say that will make you stop, even for a second and understand what it like living in the complete unknown. How do I explain the questions we ask ourselves as parents every day, questions like will Trent ever talk, will he have a shorter life expectancy, is this my fault?

I can tell you about the waiting. The constant knot in your stomach waiting. Living in a state of limbo, waiting for the many test results to come back. Tests that come about after many hours spent at hospital appointments, hours spent speaking to so many different doctors, different therapists and different experts. Many hours watching my son being poked and prodded, having to physically restrain him whilst vial after vial of blood is taken. Doing all that knowing it was necessary to rule out the life-limiting diseases.

I can tell you that it is an awful catch-22 scenario – how we hope to whomever is listening that they haven’t found something scary, that everything is okay. But when a test result comes back negative we know it doesn’t mean that everything is okay, that we have dodged a bullet, it just means that the doctors can’t find what it is that’s wrong.

I can tell you about the fear – the fear that rears its ugly head every time Trent is sick. The fear when he goes off the food that he does tolerate. The fear that surfaces every time we look too far ahead.  A fear of our own mortality. Who will care for him if and when we can’t?

I can tell you how hard this is for his brothers. Broden, our oldest knows what it is like to have a ‘normal’ sibling so he understood from very early on that something was different with Trent. Chase, however, still doesn’t realise how different Trent is. He still refers to Trent as the baby and he is sad that Trent won’t be coming to his primary school.

I can tell you that without having a diagnosis we don’t have a signpost. A diagnosis is a starting point. A direction to move in to get the information needed to understand our little heroes and being able to plan for his future.

I can tell you how we often feel like we are getting it so wrong. That we aren’t doing enough, pushing him hard enough, exposing him to enough.

I can tell you how we rely so heavily on our doctors, nurses, therapists – the professionals who are there to point us in the right direction, to give us hope when we think there is none.

I can tell you how writing out all the things he can’t do over and over again for his DLA and his educational health plan takes your breath away. How hard it is being constantly asked by families and friends if we have any info, updates or explanations about why he is the way he is. I want an answer to stop the ‘maybe he will grow out of it comments.’ Or if we give him broccoli it will sort out his autism.

I could tell you all of this, just so you have a glimpse of life with an undiagnosed child.

But now I will tell you some things:

I will tell you that I wouldn’t change a thing about Trent.

I will tell you how happy he makes us, how his giggle is infectious and has us all giggling along with him.

I will tell you that he has taught us so much about unconditional love, patience and understanding.

I will tell you that when he is able to give us eye-contact and we get to look into his gorgeous blue eyes it fills us with so much joy.

I will tell you that when he needs affection he will lean his forehead against you and giggle when you shower him with kisses.

I will tell you how we celebrate the amazing little milestones he does achieve.

I am grateful for organisations like SWAN UK (syndromes without a name).  I remember after joining them they sent Trent a beautiful bunch of balloons and card that I still carry around with me. A card written not to me,  but to Trent saying, ‘just a little something to let you know that all your friends at SWAN UK think you are brilliant.’

I urge you as medical professionals to gives the families you’re dealing with the contact details for SWAN UK. They have Parent Reps in all areas of the UK who can be another form of support – someone to listen and completely understand where they are coming from.

I hope I have given you an understanding of what life is like in limbo in the hope that when you go back to your practices, hospitals or clinics you can think of a way to touch base with families like mine that you are in contact with. Reach out to them; update them, even if you don’t have an answer, remind them that you care. Remind them that they are not forgotten, maybe even remind them that they are doing a good job. But more importantly refer these families to the 100,000 Genomes Project. Let them know that there is potentially another avenue that they can explore that may give them the answers they have been looking for.

I know as a mum waiting for results, knowing that we are not forgotten, even if you don’t have an answer, is comforting.

Thank you for what you do, for looking after children like my Trent, for being in their corner and fighting for them, please know that you are appreciated.