To the other mother…

To the other mother …

… or father. Despite the worrying trend towards casual sexism in politics and the media, I’m not joining in, honest. It’s just that ‘parent’ doesn’t rhyme with ‘other’. Non-gender bias just isn’t as catchy.

Title vanity aside, this is a bit of an unexpected post. Today is Undiagnosed Children’s Day – and this year, I have been fundamentally unprepared and well, a bit rubbish. Why? Well, the little man decided to go all 2013 retro and remind us what unstable looks like. Basically, he pulled some pretty scary sh*t. But following a big meds change, some side effects and a shed load of resilience from a determined five-year-old, all is fine. However, we are still catching up on the gazillion things we should have been getting done over the last few weeks. 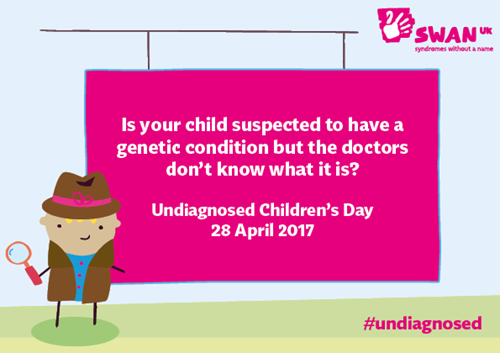 So why the last minute post? Probably a rush of caffeine, a hint of reflection and a touch of FOMO. See, this year, SWAN UK (syndromes without a name) is aiming to reach the thousands of families out there living with the unknown, who don’t know that support is there. Because there are lots. Lots and lots in fact.

Having done multiple hospital stays recently, I know, undiagnosed or not, how many families find themselves facing those unexpected stays. I see them. I know they see me (not in a deeply profound sense … I mean they literally SEE me. I am right in their face to an irritating extent. Complete with my non-sleeping child and fundamental inability to put up a hospital folding bed quietly). But rarely do we speak. Not properly.

That’s the rules of hospital. We sit in our rows, perhaps exchanging a smile here or there, but full conversation is pretty rare … perhaps, inappropriate? I imagine it’s a bit like prison … hard to have a conversation without drifting into ‘so then, what you in for?’

I, of course, assume no one knows why we are there. Knowing, of course, that the laws of physics say this is untrue. Because, contrary to what doctors may believe – a flimsy blue curtain does not have awesome sound blocking properties. Whilst I appreciate the sentiment of pulling the curtain before a tricky conversation, unless you are conducting it via interpretive dance or charades (FYI – way more interesting approach, which I am totally on board with), it’s not achieving much.

And I don’t mind in the slightest. But when the doctors leave, I don’t have lengthy conversations with others. Over the years, I’ve briefly met or interacted with several parents of babies or children with long term conditions. Often I wonder and feel I should be doing more. Saying more. Because I remember. I remember the stomach churning uncertainty of early hospital stays – trying not to run hypotheticals. Waiting to see a doctor, any doctor who could help.

I want to reach out more … to be a little less British and a bit more brash. Or perhaps both via a cup of tea?

I want to say ‘we’ve been there and everything turned out ok.’ To say what I was so desperate to hear from someone, anyone back then. To offer reassurance that it can be ok. It is possible, and there is support out there.

Then I realise – what makes me think we are reassuring? What fundamental arrogance makes me think my version of ‘ok’ is in line with anyone elses? Perhaps I should be hushing my voice even more behind that curtain, in case those snippets cause alarm or concern …

Because I can’t find a way to weave in the other part of the reality.

‘so funny and affectionate …’

That part of undiagnosed life is probably pretty invisible on hospital wards or in moments of crisis. That’s what I’d like to tell people. When I think back to myself in the early days. Clutching a baby on a busy ward, imagining a different reality, what did I want to hear? What did that other mother need to hear?

I don’t know any more, my reality has changed so much that the edges have blurred.  I can’t re-enter that completely different comprehension, or expectation.

What I do know is that around 6,000 children are born every year with a condition that will be undiagnosed. I do know the difference that the right support can make.

So if you are out there. I hope today, the sea of pink Facebook profile pictures and blog posts reaches you. I hope it makes a difference. And I promise not to be weird and brash on hospital wards (but I might bring tea).