Its funny how much things can change in a year… this time last year I had written this post for Undiagnosed Day and I spoke about how we were still waiting for answers as the years were flying by, how we had so many questions about his future etc… 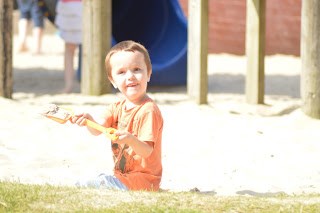 Well shortly after writing this post , I made peace with myself in accepting that Roo is the way he is and if we never found out then at least we still had support for the time being. I think because we have such a great support network (most of the time and some only after a fight) despite his lack of diagnosis that I finally accepted that getting a label wasn’t important as I now felt that as long as I had enough support from professionals then we could get through his childhood and felt encouraged by the tiny progresses he was making. I belonged to a fab support group, one of the only kind to actually support and advise parents/carers who were raising children who were “undiagnosed”, that group as many of you are aware is SWAN UK.

It felt like a huge weight lifted to be honest that I was no longer obsessed with seeking the “whys & whats” and could just enjoy life watching Roo & his brothers grow up and marvel at all the progress Roo was making. We had a fab summer doing many things, making many memories that are forever etched in our minds, little did I know that when the season changed to Autumn, that it would all change yet again and I would no longer feel the peace I felt.

One simple answer – I had fallen pregnant ( which is a miracle as explained in previous post.)

This had a huge impact on our lives, we had so much comments from others “how are you going to cope?” , “what if this baby turns out to be disabled too?”. My husband and I spent a lot of time talking about the future, about how things would change due to this unexpected addition..We had the added issues of my health as my body doesn’t do pregnancy and I rely on lots of meds and willpower to keep me out of hospital, to keep me and the baby alive.

The one issue that worried us the most was if the child did have the same issues as Roo? How would we feel? How would we cope and how would our other children cope?

We had a review coming up for Roo with his community paed so once the meeting was over we then told her our news and she was surprised but congratulated us and suggested that we had a chat with Roo genetic consultant and we agreed as there was one burning question at the front of our minds ” what were the risks of this child having the same undiagnosed condition as Roo?”. As you will have read earlier in the post that we announced Roo was going to be a big brother we were told the risks were 5 – 20% so quite low but the genetic consultant stressed to us that it was only a guess as Roo is unique and rare and the fact that his issues didn’t arise till after the birth meant that there was no testing that they could do to prepare us. We could only wait and see….

No longer I felt at peace, I was frustrated at the lack of diagnosis for Roo, frustrated that we had no idea what his future holds so therefore we had no idea about how things would turn out for our new baby. I felt the desperation & longing for answers returning.

I was watching the post hoping every day for the letter from the DDD study to say that they had found something, every time someone got a diagnosis I would google the rare syndrome to see if it was similar to Roo… Being pregnant and hormonal does not help I guess! I am now in my 3rd trimester of a very difficult pregnancy and as the birth gets closer and closer I find myself becoming slightly more anxious and worried about whether the baby is going to be OK or not and the impact it will have on the family if she does. Thankfully I am not the only swan mum going through this as there have been quite a few who are pregnant too and I know my feelings are normal as speaking to them they have the same concerns, the same risks. I am not alone in this part of my journey and that makes it a bit easier.

Sadly there is no crystal ball that we can use to see into the future on whether we will ever get a diagnosis for Roo. We can only do the “wait and see” that we have been told so many times over the years.. Only time will tell if the baby will become one of the 6000 children this year that will be born with an undiagnosed condition. SWAN UK is the only charity that is dedicated to supporting undiagnosed children like Roo.

On the 29th April 2016 it will be Undiagnosed Children’s Day where many families and the charity will be trying to raise awareness to the general public. Why is this important? Simply because SWAN UK rely on donations and funding to being able to support its members. This year two of its main funding – the National Lottery and Big Lottery funding – is due to end this month so its essential that they raise enough money to carry on providing a unique service to families like ours. Also there are many families out there who may not be aware of that there is a support group for undiagnosed children so we need to continue to spread as much awareness as possible.

I will be sharing some blog posts by other swan mums and posts from SWANchildrenUK on the day to raise awareness. You can help by resharing those posts on your social media. Or you can wear pink /blue on the day.