Olivia was born in July 2002 by emergency cesarean section; due to her being breach and she weighed 5 pounds. She was so tiny and never cried but she seemed fine. As we were ready to leave hospital her consultant told us her hips were dislocated and she would need weeks of treatment and to wear a harness. 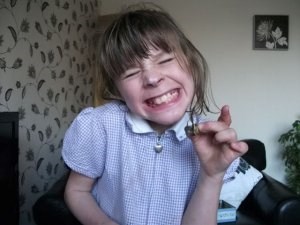 After weeks of sleepless nights and constant crying I felt exhausted and knew something was wrong.

Shortly after her birth Olivia started having feeding problems, refusing breast milk or formula she was constantly crying and unsettled and only slept for 15 minutes at a time.

She was eventually diagnosed as being lactose intolerance and had severe reflux problems and was placed on pre-digested milk. Things did seem to improve in her feeding and sleeping and things seemed on the up for us.

Although Olivia was on a strict diet at eight months old and was limited in what she could eat and this continued until she was able to digest food. At this time Olivia was slowly gaining weight but still cried all the time and often let out some loud screams I would sometimes pick her up and she would shake and her body would stiffen. She started nursery at six months old as I went back to work and after a few weeks nursery had concerns about her development, she did not seem to be smiling or reacting to things around her and we was sent to a child development doctor. After two years of visiting hospitals, Olivia started having problems with her eyes she suddenly woke up with a severe squint one morning and there were concerns that her sight had been affected. 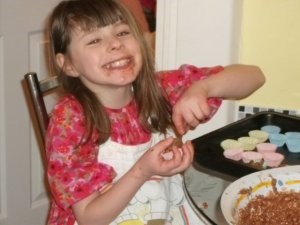 Olivia started to have problems with her ears and nose and was having problems hearing, She underwent two operations on her ears but no success and she had her adenoids’ removed but they were badly diseased and damaged little could be done except to continue with a steroid drop for her nose.

This did really hit home as I think at the time I convinced myself after her bad start she would catch up so this was quite a blow, I remember the doctors calling me back a week later and handing me a leaflet which read Williams syndrome* I took it home and searched the internet and yes I thought this is her.

Further testing needed to be done to look at her chromosomes around number seven and to look at her calcium levels, the tests were negative, but still the genetics would not rule Williams syndrome out. While we were waiting for further tests Olivia was referred to a neurologist because she had always had these weird shaking episodes where she would shake and stiffen then go totally blank. It was confirmed she had a form of epilepsy and was medicated for this but due to side effects I discontinued it and I self manage it. Olivia has always had bowel problems from been one and continues to do so today she takes regular medication for this and it is manageable. Olivia needed further treatment for her ears and she needed to wear hearing aids to help her because she does not hear properly.

Olivia continues to have health problems, including ITP last year, this will be monitored with regular blood tests.

Olivia has started early puberty and this too is been monitored.She is also having trouble with her stomach and bowels, she is on more medication for this and is waiting to see a specialist.

Olivia is still under the genetics, no cause as yet been found for her problems.

* Williams syndrome is a sporadic congenital syndrome due to a microdeletion of chromosome 7 (7q11, 23) at the elastin gene focus. There is a typical facies and global developmental delay. There may be abnormalities of calcium metabolism and problems may occur in any of the major systems. (Taken from Contact A Family Directory http://www.cafamily.org.uk/Direct/w15.html)