I had three daughters already from a previous marriage. I had split up with their Dad when the youngest was just a baby. Me and my partner had been together for about two years when I discovered I was pregnant with baby number four. We were happy, scared, excited…all the usual emotions that go with finding out you’re having a baby. 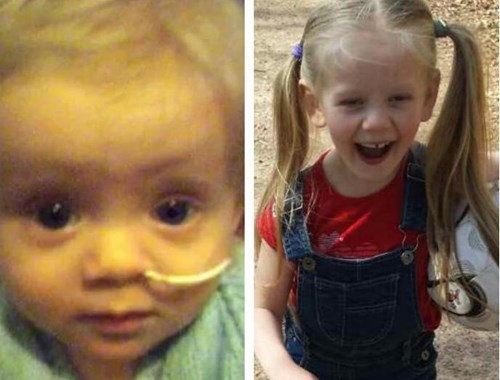 The pregnancy went along fine, we found out I was having another little girl. Nearer the end she kept turning and ended up being transverse, I had her turned and they tried to induce me. She was stubborn even then and refused to come and turned back into the transverse position. I had to be booked in for a C-section. I’d never had one before and was terrified. The day came; 06/03/06. I went down to theatre at 8am, by 10.36 Maddison was here. She screamed as soon as she came out. She was perfect 7lb 6oz.

Maddie seemed to sleep a lot compared to my other children, she never seemed hungry and feeding her used to take forever. As the weeks went on she gained weight slowly but the health visitor didn’t seem concerned and the GP said “well her dad is small” and didn’t look into it. I knew she was different to the others but everyone kept saying “oh well she has a different dad”…she couldn’t weight-bear and just seemed very floppy.

I told the health visitor of my concerns when Maddie was 4-5 months old and still couldn’t roll and was making no attempt to sit (she just used to lay there like a new born).The health visitor raised my concerns with the GP who again fobbed me off. I pestered the doctors for months but it took for Maddie’s weight to drop below the red line for him to finally refer her to the hospital. Maddie finally had an appointment when she was 10 months old.

When we turned up at the hospital the paediatrician admitted her there and then. Maddie was in for 10 weeks solid for investigations. I look back now and wonder how I did it. I barely saw my three older girls, just stayed with Maddie day in day out watching her go through test after test, feeling helpless wondering if it was something that I had done. Maddie lost more weight and ended up being tube fed through her nose. She looked so pale, so ill and helpless. Maddie still couldn’t sit or rollover.

I wouldn’t give in, I had to get her to eat to get stronger. I would sit up all night long coaxing her with a bottle but it was never enough. I decided to stick a bit of strawberry milkshake in her formula and it was the best thing I ever did. Maddie decided she liked the taste! She started drinking more! I started putting it onto her weetabix and pureed food and the tube came out. Maddie had gained enough weight to come home!

She had a long way to go but it was a start. From then on it was all about Maddie, our whole lives revolved around her appointments, physio, diet… everything. My relationship with her dad was very strained, the stress, lack of sleep and never seeing each other was taking its toll. I put too much responsibility on my eldest who was 11 by this point, I spent no quality time with the elder children and the experience made me feel completely torn.

I didn’t know if Maddie would ever walk or talk, the doctors didn’t know what was wrong, why she was so delayed, why at 10 months old she was the size of a three month old, so they couldn’t tell me if she would get better or worse. Slowly Maddie started making progress and at 13 months she could sit unaided.

I had my little boy in the middle of all this and would feel guilty as he’d be fed changed and put back down as I would then spend hours getting Maddie to eat one meal or do her physio exercises. At around two and a half Maddie started pulling herself up (her little brother had completely overtaken her at this point and had already been walking since he was 10 months old). He was good for her though, she would watch him and try and copy. Finally at just over three years old she did it, she took her first steps. I never thought I would see this but from then on there was no stopping her. Maddie’s Dad and I split not long after, he just couldn’t deal with it all anymore. I was on my own but I didn’t even mind, my priority was my children. Maddie is eight now and she is still very delayed. She says mainly single words but can’t put two together. She has hypermobility in her ankles (but does not let that slow her down) and her understanding is definitely improving. She is functioning to the level of an average two year old, she is still in nappies and is very small. I have wrapped her up in cotton wool so much.

However, being part of SWAN UK has made me realise it could be so much worse. I am lucky her health is now good, she has come a long way. I need to remember that she isn’t that poorly baby anymore, she is a beautiful stubborn, strong willed little girl who may take longer than some to get there but she will find a way. I spent so long pushing her to eat or walk or talk, I didn’t take time to sit back and enjoy her or truly enjoy my time with any of my children. It feels now though as if the worst is over. I have beautiful children who I am so proud of.

I have stopped dwelling on the what-ifs or longing for a diagnosis, it won’t change Maddie.

She has the most remarkable character and I just love watching her blossom in her own time now. Things are still hard, her temper and lack of sleep mainly but I am hoping the terrible twos won’t go on for much longer, she is eight after all! 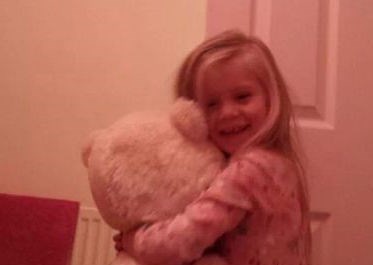 We’re always looking for new stories – if you’d like to share yours please email us: [email protected].