Hello, I’m Louise and I live in North Yorkshire with my partner Richard, two and a half year old Evan, who is my SWAN. Evan also has a 13-year-old half-brother called Harrison, who visits us every week. 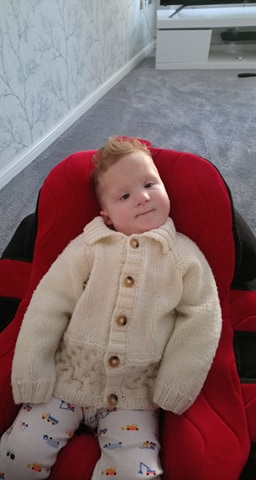 Evan is very, very chilled and rarely kicks up a fuss. Strangely if he does cry I soak it up as it’s quite a pleasant sound  – I realise that that’s a bit of an odd thing to say! Evan likes sensory things like foil blankets, lights and metallic objects like tinsel and pom poms. Evan likes music and is often the victim of mummy’s crazy dancing when he is in his stander! Evan’s favourite thing is water.  He doesn’t react to many things but you can usually get a reaction from him where water is concerned.  He loves bath time and swimming and often gets the giggles after a bath when he is being massaged with his cream.

He doesn’t always react, so when he does it’s absolutely amazing. Evan also loves snuggles and sometimes he will even sneak in a little smile. Evan has recently started laughing a little and responding more with smiles too.

As Evan is so chilled there isn’t much he doesn’t like, although his lack of response can make it hard to tell.  Sometimes he doesn’t like being tired and occasionally he likes to have a little cry until he falls asleep, but that doesn’t happen often.

I heard the term ‘SWAN’ quite early into our journey with Evan, but just thought it was a term that someone had made up. It wasn’t until Evan was around two years old that I found out exactly what SWAN UK was all about and the support that it offers to families like ours.

Evan is currently undiagnosed, hence being a SWAN. His symptoms we know about at the moment include epilepsy, infantile spasms, hypotonia, global developmental delay (GDD), unsafe swallow and problems with the development of his brain and optic nerve, to name a few. I would say that the GDD and hypotonia have the biggest impact on Evan, although both of these are a result of hypomyelination (undeveloped myelin). We only found out about the 100,000 Genome Project just before it closed and were too late to participate.Evan has had a microarray CGH and exome sequencing, but none of these results have given us a diagnosis. We are waiting for whole genome sequencing to be available on the NHS, but I feel like we may be waiting forever.

We realised something was different with Evan the day he was born as he was transferred from York hospital to Hull Neonatal Intensive Care Unit for cooling. At the time I never imagined that his problems would be as they are now, and I thought I would still have a neurotypical child. What we had known as ‘normal life’ disappeared, and we created our new normal.  It’s a journey no one asks to be on and no one really wants to be on, but you have to embrace the path you have been given and make sure you live your best life and provide the best life for your child and family.

In the beginning I felt guilty.  I questioned every single thing I had done in life to try and find a reason why this had happened to us.  (Even right back to when I once pinched some glitter from a stationary shop  and threw it all over the path when I was a child. Yes, I’m naughty I know!) Now I feel less to blame and have half accepted that Evan’s condition is ‘one of those things’, although knowing this doesn’t actually make you feel that different.

When I’m asked about what I would change, I could easily say ‘everything’ but I know that sounds terrible.  Evan wouldn’t be Evan if things weren’t how they are.  It’s not how we wanted things to be, but we have been given Evan for a reason. If I was given the option to change one thing, I would change other people’s ignorance.  People are so uneducated where disability is concerned, and I’ll admit I probably was too before Evan was born. There are other little things I would change, but miracles don’t exist, do they.

People don’t get it when you say you don’t know what’s wrong, so in some ways it would be nice to say Evan has got ‘insert name of condition’, but instead I just say ‘Evan is a SWAN’. I think I have prepared myself to never get a diagnosis for Evan, so in some ways I’m not even sure whether getting one would make things easier. I would be more interested in a cure. A diagnosis would give us a prognosis, but do I really want to know the answer to that question? The worst thing about being undiagnosed has to be the unknown, not knowing what the future holds. I don’t think about the future, I live every day as it comes.  If I think too much about the future it scares me.

Prior to becoming members of SWAN UK we felt alone and very rare, but once we joined the community we had the realisation that there are others out there just like Evan. For us, SWAN UK means that it’s ok to be undiagnosed and that there’s support for all the beautiful SWANs out there.

Are you interested in sharing your family story? Get in touch: [email protected].