GETTING A DIAGNOSIS: RUBEN AND FAITH

My name is Jenni and I’m married to Warren. We have four children – Leo, 14, Lucas, 11, Reuben, seven, and Faith, two. We all live in East Lothian, Scotland. We also have Pepper the dog, Shadow the cat and Georgie the tortoise! We’re a busy household!

Reuben, who is seven, was undiagnosed (still is to some extent) until last year when the Deciphering Developmental Disorders (DDD) study found he had an extremely rare mutation, so rare that no one else with this mutation is registered with Unique or SWAN UK. In fact, no one in the world has this mutation.

Faith, who is two, was undiagnosed for the first 14 months of her life until she too was diagnosed with a rare genetic condition, except hers is a mutation in the MITF gene which means she has Waardenburg syndrome.

Reuben’s biggest love is music. He loves to listen, sing along and dance to it. He loves being outdoors as he always wants to sit and dig in the mud, sand and pebbles, so we take him to a lot of places like country parks and the beach as he is at his happiest there. He also loves his iPad on days when he wants to shut himself off. He hates people dressed up and hand dryers. He has a very happy personality and loves to help around house. He can be very stubborn!

Faith loves being outside on the swing or trampoline or in her wee car ridealong. She loves animals and a lot of her toys are centred around animals. She loves to watch PAW Patrol! She is a very independent, feisty little girl but can be extremely shy around other people. She hates being on her own and hates getting her hands dirty. 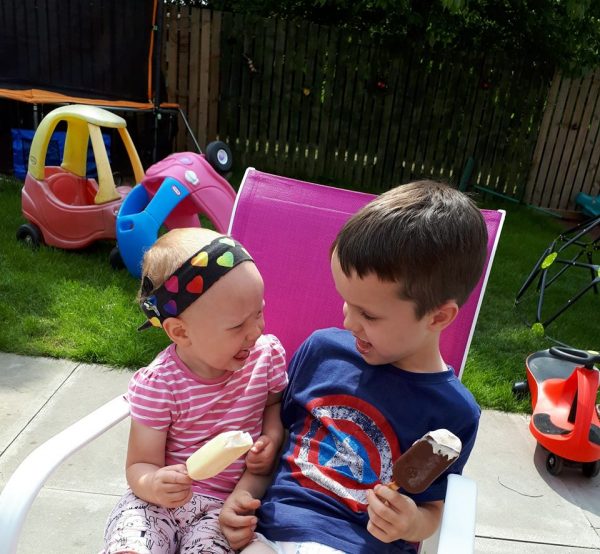 Reuben has white matter changes on his brain, macrocephaly, severe learning disability and limited communication – while he can talk, a lot of it is copied speech and he is unable to tell you what he is feeling, what he wants or needs. He also has hypermobility syndrome which means he is very flexible and can easily sublux his joints, he is very long sighted, has developmental delay, idiopathic intracranial hypertension (currently in remission), severe glue ear requiring regular grommet operations, a sleep disorder where some days he wakes after midnight and doesn’t go back to sleep, and sensory processing issues. The most significant is his severe learning disability as he is very much like a three-year-old that has no danger sense, and it impacts on every aspect of his life. Faith has bilateral profound deafness, is non-verbal, and has different coloured eyes which are part of her syndrome. She also has constipation issues, sensory processing issues and sensitivity to the sun. The most significant of her issues is her speech and language delays as she is unable to communicate unless it’s in sign language or gestures.

With Reuben we realised things were going to be different when he was 11 weeks old because that’s when concerns were raised about his development and his large head that was growing faster than normal. With Faith we knew from when she was four weeks old, when she was diagnosed as being deaf and having delays.

Before getting a diagnosis it was so hard not having a prognosis for their future, not knowing how it was going to affect their and our lives, having to undergo so many different tests to rule out conditions and wondering if it was worth it putting them through it all, and not knowing if it was heredity, meaning would it affect our other children when they start their own families? Also, we had to fight for support from some departments as with no diagnosis they were reluctant or refused to help us.

Reuben’s diagnosis came from the DDD study, four and half years after we were enrolled onto it using our saliva and Reuben’s. He’d had the basic genetic tests before that which all came back as normal. Faith was referred to genetics to be tested for all the deaf genes but when her eyes changed colours so that one was blue and the other brown, her consultant, who had come across this before, suspected Waardenburg syndrome so also ordered that genetic test. It came back positive for type two. If those tests had been negative the next step would have been to go on the 100,000 Genomes Project.

Getting a diagnosis was important to us as we wanted answers as to why this had happened and to know for our other children’s futures.

With Reuben, getting a diagnosis has actually been harder as we still have no answers as it’s so rare. This means they cannot give us a prognosis or tell us if this is the cause of his issues and it doesn’t help us to get more support or anything. We were just told this diagnosis and left to get on with it as they cannot tell us anything until more research is done. With Faith, her diagnosis has made things a lot easier as we have everything in place to help her and support her as she grows up. We know what to expect and what other symptoms she may get as she gets older so at least we are prepared.

The best thing on this journey has been finding SWAN UK as without them we wouldn’t have met and made valuable friendships or had the support and advice to help us to make things a bit easier. It’s also showed us that life is precious and to enjoy and appreciate every single moment, to celebrate every milestone no matter how little as we know how hard it has been to get there.

I found out about SWAN UK from my mum who had read a newspaper article about a little girl who had an undiagnosed syndrome and sounded a lot like Reuben. Since being a member I have formed some special and close relationships with other parents, had advice about the education side as well as other things that we would never have known as no professionals tell us these things. We take part in online activities like supporting the annual awareness day, Undiagnosed Children’s Day, and take part in challenges like the SWAN UK Virtual Marathon. Without SWAN UK we would be totally alone.

SWAN UK HAS A FACEBOOK GROUP FOR REGISTERED MEMBERS WHO HAVE RECEIVED A RARE GENETIC DIAGNOSIS. TO FIND OUT ABOUT JOINING SWAN UK EMAIL: [email protected]