Getting a diagnosis: Our story

I live in Otley near Leeds with my husband and two sons. My youngest, R, aged four, has a very rare genetic condition. R is a very lively and friendly boy who throws himself at life with a lot of energy and enthusiasm. He’s a charmer and still very much playing the cute card. He is only just beginning to ask questions about his condition, and to understand how he is different to his classmates.

He loves swimming and going out on his balance bike, and playing with his big brother. R’s disability came to light very gradually between the ages of one and three. He had hit his milestones roughly on time until then. Between one and two he made a painfully slow progression towards walking. He walked independently for the first time just after his second birthday. Rather ridiculously, in retrospect, he was discharged at this point with the expectation of normal progression! Luckily for us our physiotherapist met him shortly after this and made sure he didn’t fall through the cracks. 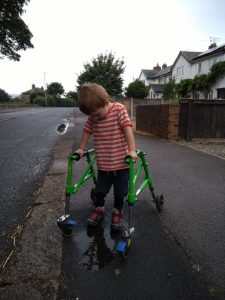 From about two and a half years old onwards we were chasing a diagnosis. It felt like a fight from start to finish. First we fought to get him referred back to a consultant, then chasing each of the next steps of the diagnostic process. Each step seemed to take an age. While I am a massive fan of the principle of the NHS, I don’t think it deals very well with rare conditions.

R was never an urgent case so his diagnosis dragged on and on.

No doubt as a result of limited funds the tests he had were done in sequence, so you have to wait for the results of one before starting the other. While you wait there are periods when you have to chase up weekly to ensure something is done. As a swan parent you basically have to manage the NHS, as no one else has the time to focus on your child.

Each time a result comes in or might come in you spend the days before building up to a possible diagnosis.

When the doctors don’t appreciate this and have to be asked if there has been any progress it is highly frustrating. As a family we went through a really tough time – particularly my husband and me. We imagined the worst possible outcome for R and over time came to terms with how we would cope. We still monitor him all the time for progression – this is torturous as often we are the only ones that can see it, apart from school or nursery.

Family and friends in the early days saying ‘he’ll grow out of it’ was also really frustrating when we were contemplating fast progression and a potential life limiting disease. People’s attitudes to disability were not very helpful either. There is a combination of prejudice and patronising attitudes that I still find very annoying. Spare me the ‘isn’t he wonderful’.

Throughout this process there were two lights in the darkness. The first was SWAN UK. Here was a community of people who were facing the same kind of uncertainties and the same heart wrenching fears for their kids. The solidarity and love from this group of strangers was lovely and totally essential for me.

Many SWAN UK members remain undiagnosed for a lot longer than R did.

The second was R’s school, with our SEN legend who was a beacon of strength and reliable advice throughout. School quietly went about adjusting the classroom to allow R to get round easier – inclusion is a given here and a part of the culture.

The diagnosis when it came was strangely relieving. R has Hereditary Spastic Paraplegia (HSP), cause by a gene mutation which only about 200 others in the world also have. We found out through a panel test for HSP which took a gruelling six months to confirm. R is even rarer really as since joining a research project we have found out that he is the only one with his specific mutation. What this means is, that for him, there is no real prognosis – so strange to feel relieved. Other people with a mutation on this gene have a spectrum of disability, including blindness, learning difficulties and a shrinking part of the brain. R doesn’t have these yet, so there is always a background worry that something else might develop. The likelihood is that he will see some progression: become less stable, less able to walk independently, use his wheelchair more, and lose other motor skills or his sight. The relief comes from knowing what he does have at last, and knowing that it is not as bad as it could have been.

Diagnosis has also spurred us on to get our house in order, literally by extending it and making it accessible. I am constantly reminded in our journey of ours and his privilege. I am an assertive and confident person, and am able to demand he be supplied with better resources. We also have the money to make sure he has a good place to live and lots of lovely opportunities. Horse riding with Riding for the Disabled was the first time a door opened that would otherwise have been left firmly shut! My understanding of disability has also grown immensely, as have his brother’s and our extended family’s, and I hope we have all become less ableist as a result.

While I’m worried about what the future holds I also can’t help but feel optimistic about my funny, beautiful, loving and chaotic little monkey of a son.