Getting a diagnosis: Chloe

My name is Clare and I live with my husband Mark and our two children, Aimee who is nine and Chloe who is three.

Chloe was diagnosed with Mowat Wilson Syndrome (MWS) in January 2018. This condition affects approximately one in 100,000 births with around 500 currently diagnosed worldwide. It leads to congenital defects, seizures and developmental delays. Chloe has a congenital defect called agenesis of the corpus callosum also known as a ‘split brain’ where the middle part that connects the left side to the right side did not develop and is therefore missing.

At the moment she cannot walk or talk and relies on us for 100% of her care.

Chloe loves nothing more than cuddles and a carry on with her big sister. She also loves clapping her hands, music, pressing buttons and turning pages in books! Her biggest accomplishment to date is slowly but surely learning to communicate small things with us which is a massive thing for a child who is completely non-verbal. 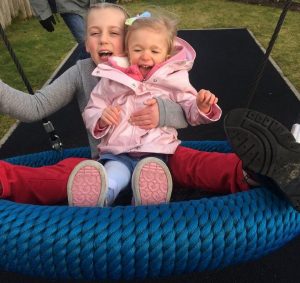 She has also been working super hard at walking and can now take steps holding on with only one hand. We realised there was a delay in her development when she was around six months old when she wasn’t rolling or able to sit up at all, even with support. This, combined with her poor feeding and weight gain made the health visitor refer her to a consultant paediatrician and from there things basically snowballed to where we are now.

Before Chloe was diagnosed it was tough to have people tell us she was just a bit slower, she will get there in her own times and such like as we knew that wasn’t the case – we just couldn’t explain to anyone what the actual issue was. In the end, we saw a lovely geneticist just after Chloe turned two who told us she thought she knew what was causing Chloe’s difficulties and health problems but that they couldn’t test for it in Glasgow so 100% confirmation would take a few months. She told us about MWS and once we joined the online community we knew this was what she had. There was such a likeness between all the children.

Having the diagnosis has helped us in many ways. It has made explaining Chloe to people so much easier, even if they do need to go away and Google (doctors have even Googled her condition during appointments)!

It has also been great to connect with many families worldwide who are going through exactly the same as us with their MWS children.

I joined SWAN UK before Chloe was diagnosed and it really was a lifeline at the time. I had no idea there were so many children and young adults with undiagnosed conditions. It also opened my eyes to the world of genetics and without that, I’d never have pushed to see a geneticist and Chloe would still be undiagnosed!

I’ve met lots of great people through SWAN UK, not only online but in person. We even attended a family day out at Blair Drummond Safari Park courtesy of SWAN UK, which was lovely!

Our outlook on life has changed a lot since having Chloe’s diagnosis. We think a lot about how we will cope having a child dependant on us for life, about the impact it has on her big sister who is the glue that holds us all together at times, but we have found some peace in having a diagnosis and try not to worry about the ‘what ifs’ of the future too much and focus on having happy kids right now! Mowat Wilson Syndrome isn’t something I’d wish for but it is also something I can’t change so as the saying goes ‘When Life Gives You Lemons, Make Lemonade!’