I think about Finley’s first year of life most days. I had a healthy pregnancy, a caesarean and he scored a ‘10’ on the Apgar test (first test given to new-born babies), so what could go wrong? For the first few months we didn’t notice anything significantly different about him and his development, it was only when the main milestones came up, that we realised he was nowhere near reaching them. He struggled to sit up independently for most of the first year. At the time we lived in Germany where regular development checks are carried out, but nothing was ever picked up. At around 15 months old we raised our concerns with our paediatrician and Finley was admitted to hospital for a week of tests – ECG, EEG, MRI, sonogram, eyes, hearing, speech, bloods – everything you could think of! It was a tough week for him (and for the rest of the family).

It was difficult to put him through all of this, but we were hoping for some answers. We didn’t get any.

He was diagnosed with global development delay.

Finley started a physiotherapy programme following the tests, where we soon discovered he had hypotonia (decreased muscle tone). This was confirmed by the physiotherapist and paediatrician and did give us some answers as to why his mobility was weak. A short time after this, in summer 2015, we moved back to the UK and were referred to a paediatrician where they continued with the physiotherapy and also referred him to orthotics and speech and language therapy. Genetics was the next route we were going to look at following the tests in Germany, so this was picked up in the UK. We attended the clinic at Manchester Children’s Hospital and a series of tests were carried out to try and determine if Finley had any of the ‘main’ genetic disorders, which included Fragile X Syndrome. Months later, the results came back negative. We have since had other genetics appointments where we have discussed family history more and looked at Finley’s behaviour and his physical appearance to try and get a better understanding of what it could be. Further bloods were sent for testing a couple of months ago and we are waiting to hear back with the results. We have been fixating on the questions we were asked by the doctor and then ended up trying to diagnose Finley ourselves (with the help of Google)! I wouldn’t recommend this, but sometimes you just get to a point where you are desperate for some answers! 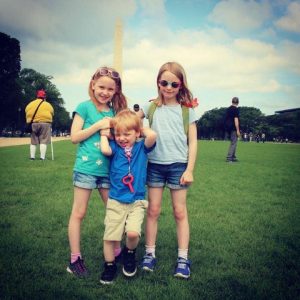 Finley is four now and although he has his disabilities and hasn’t found his voice yet, he definitely has a personality! He’s a very caring little boy, loves cuddles and has an infectious laugh! He loves being around other children, water and most food! His twin sisters, Ellie and Sophie are amazing with him, they’re his cheerleaders helping him on his journey.

It is hard having an undiagnosed condition. We know that giving his condition a name won’t change Finley, but it will give us a better understanding of what he is going through and what the future holds for him.

We first heard about SWAN UK through Finley’s paediatrician.

SWAN UK is a great support to our family and others going through the same thing. Not only is it an informative network but the community understand what we are going through, and we have made connections with others over the last year.

There are lots of ways to support this amazing network, particularly through fundraising but we wanted to find a way to both raise funds for them and raise awareness. We started a company in June this year; ‘Starkidtags.’ This all came about following a daily struggle we had with having to justify why Finley was using a pram. We created a special pram tag and it has grown from there with a variety of tags and lanyards available to those who are non-verbal, have sensory processing disorder and epilepsy just name a few. We wanted to give something back to SWAN UK, so we donate 10% of every sale to them on a monthly basis and we hope to continue to support them for the foreseeable future, as they have supported us.

PrevPreviousGETTING A DIAGNOSIS: RUBEN AND FAITH
NextRunning the Cardiff half marathon for Tilly and SWAN UKNext