Hello, my name is Rebecca. Felix is our third child. All had gone smoothly with my first two pregnancies, and we had two healthy children who were five and three years old when Felix was born.

I was not expecting the third pregnancy to be any different, but during the 12 week scan the sonographer noticed that the baby was very still and had extra fluid behind its neck. I was not that alarmed, being fairly naive at this point, and the baby had a heart beat and was the right size. I got a call from the midwife a few days later to say my blood test results indicated that I had a very high risk of Down’s syndrome, and she asked me if I wanted to have a prenatal test to see if the baby had Down’s syndrome. I decided to have the procedure, which was followed by a stressful three day wait for the results, which eventually came back clear. Despite the results of the test, I still couldn’t seem to shake the feeling that something was wrong, no matter how many times the midwives reassured me throughout the duration of my pregnancy. 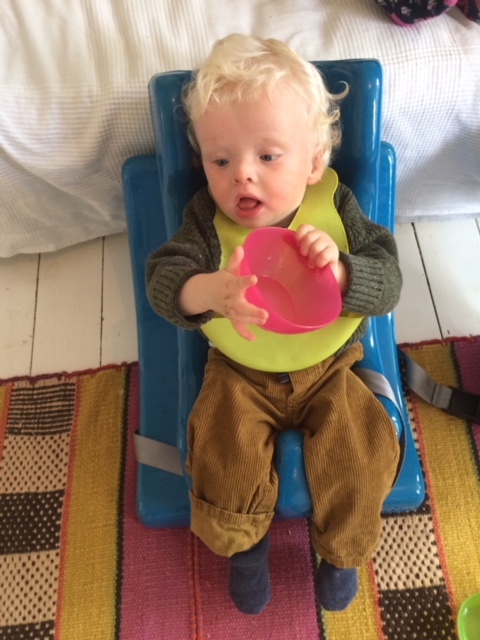 After nine months, Felix was born by a planned cesarean section. Although he had moved very little in the later stages or pregnancy and I had been monitored several times, nothing unusual was flagged. As soon as Felix was born, I felt an overwhelming love for him and also an overwhelming certainty that something was wrong. He didn’t look like my other children, could not suck effectively to feed and looked misshapen and fragile, with a face that was different to anyone I recognised. I raised my concerns with the health professionals but was reassured that he was fine.

The first few weeks of Felix’s life were exhausting. I spent whole days and nights feeding him non-stop because he couldn’t feed very well. He gained weight very slowly, slept only in small half hour stretches and wouldn’t sleep anywhere but on me. Felix cried a lot and was fretful and unsettled, but I loved him so much.

When Felix was nearly four months old I saw a photo of him taken at my daughter’s sports day and knew with certainty things were not at all ok. He was very, very floppy, still with no head control, and looked puffy and unwell. I took him to the GP and this time she agreed that there was something very wrong. She suggested syringing milk into his mouth, booked us an urgent appointment at the hospital and from then on things happened quickly.

He was extremely dehydrated so that was addressed first, then over the next few weeks he had lots of blood tests, a brain ultrasound, followed by a brain MRI under general anaesthetic and it was confirmed by a neurologist and geneticist that his ‘dysmorphic’ facial features, macrocephaly, hypotonia, abnormal movements and inability to feed indicated with certainty that he had some kind of genetic condition. 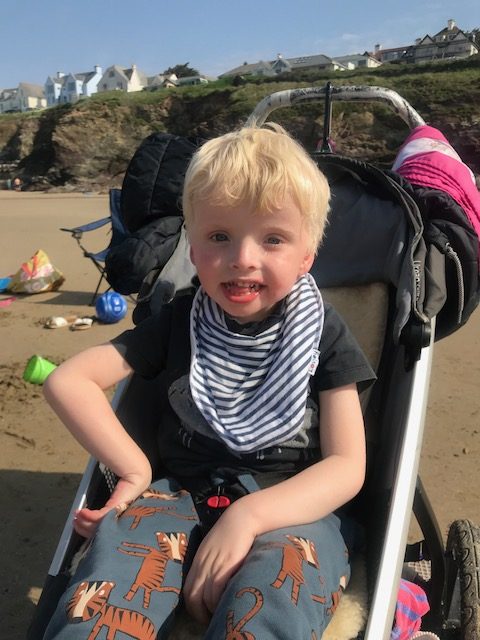 Genetic testing would take eight weeks to come back, after which I assumed they would tell us what he had. It never occurred to me that we would never find out what was wrong. I came across SWAN UK whilst trawling the internet in the early days and assumed that it would never be relevant to us, because Felix had so many unusual features that it seemed clear he must have a known ‘syndrome’.

The results of the MRI came back with horrific news – it appeared he had a degenerative metabolic condition and would not have a long life. The few months following this news were almost unbearable. A follow up MRI appeared to confirm the results, but still no diagnosis was made. Genetic testing had not identified a cause.

During this time I also discovered I was expecting our fourth child, and without a diagnosis we had an extremely anxious pregnancy because we did not know if the condition would also affect this baby. It felt surreal to be in such a nightmare situation. The possibility of having two children with a degenerative, life limiting condition seemed unthinkable.

However I felt that this baby was going to be ok, which I had never felt with Felix, and fortunately 18 months after Felix was born we had a healthy daughter.

Over the next couple of years Felix’s progress was extremely slow to the point it was almost non existent, which at times was very disheartening. However, at two years old, after a huge amount of physiotherapy, he was able to sit without falling over which we were thrilled about. Now he doesn’t appear to be losing skills, so despite the dire MRI results and apparently uncertain future we feel that he is doing very well.

Felix is now five and a half and has severe learning difficulties. He can communicate in a very basic, non verbal way. He will look at us, cry or bang his hands, and has one or two basic signs. He cannot walk or crawl but can sit really well and has learnt to push the wheels on his wheelchair which is amazing. He attends a fantastic special school and with a huge amount of input from school is learning some more signs and making some progress physically. He has a good quality of life and is happy, funny and an integral part of our family.

The lack of diagnosis is still hard to accept. An exome test has identified a probable cause of his condition but no one else in the world has the same gene mutation with the same phenotype (or set of symptoms). Until another person is found with exactly the same condition and same genetic change, this is a change of ‘unknown significance’ and is not an official diagnosis.

SWAN UK has been an invaluable source of support. Without a diagnosis we don’t belong to any other groups so it can be a lonely journey, but these other families who understand what we’re going through are our tribe. Knowing that other families are in a similar situation to us and are dealing with similar uncertainty and complicated disabilities is very comforting.

Families help each other with advice and information and understand that having a disabled child is very hard and lonely at times. However much you love your child you feel desperately sad for the loss of the healthy child you thought you were having, and it is difficult not to have a proper explanation as to why this is. It is also hard not to have a proper prognosis. Without SWAN UK, in the early days especially, I would have felt pretty desperate and alone.

Felix is a wonderful but challenging boy, and has brought a new understanding of life to us as a family. I think back to the Down’s syndrome test occasionally and wonder if life with a known condition would have been simpler. But for us, there is no choice but to look forwards, remain positive and do the best we can for Felix and his siblings. We have met some wonderful, kind people through having Felix, and he has made us reconsider what is important in life. It helps so much to know that SWAN UK is there and other families are in the same situation as us.

Are you interested in sharing your family story with the SWAN UK community? Get in touch with us at: [email protected].