SWAN UK member and blogger, Emma Murphy spoke about her brave boy Hugh at the House of Fraser Annual Charity Event in July. Read her speech below.

“My name is Emma, I’m mum to two young boys aged 7 and 6. Hugh, my youngest, has an undiagnosed condition, otherwise known as Syndrome Without a Name, or SWAN.

Thank you for inviting me here to share our story. It truly is a pleasure to be here. It’s also somewhat of an achievement for me to have made it here. I was actually supposed to be coming to speak to you all last year, but in Hugh’s own unique and incredibly unpredictable way he ended up being rushed into hospital shortly before the event. He’s actually been unexpectedly hospitalised twice in the last month, so yes, for Hugh to be well enough for me to leave him and for me to be able to stand here in front of you all, rather than holding a bedside vigil in the high dependency unit, really is an achievement in itself.

It’s that unpredictability and the unknown that makes having a SWAN such a unique and sometimes challenging experience. Nobody can tell us why this has happened; no-one can tell us what to look out for or what the future might hold. Hugh’s needs weren’t obvious at birth but by the time he was about 6 months old it was becoming more and more apparent that he wasn’t developing at the same rate as his peers, the difference between him and his brother, just 14 months older, was stark. In those early days, without a diagnosis, we had no idea what to expect – would he be able to walk, or talk, or go to a mainstream school? 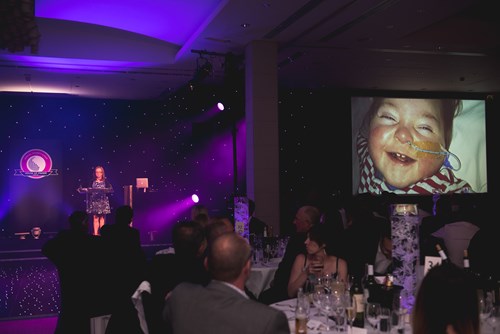 Let me tell you a little bit about Hugh.

He is perhaps one of the happiest, most smiley children you could ever hope to meet. He giggles and laughs at funny sounds and he absolutely loves balloons. He has a mass of thick, brown unruly hair; hair that grows in every direction and refuses to lie flat. He has cute little freckles that dot his cheeks and nose, and a face that positively lights up with his smile. His most recent school report refers to him as being ‘determined’ and having a ‘strong character’, he certainly knows his own mind.

Hugh uses a wheelchair. It’s a pretty cool chair with a bright red frame and super hero logos on the wheels – all the kids are impressed by that! (And some of the adults too). He can’t sit or stand independently and he is fed through a tube that goes directly into his stomach. He can’t see very well and he’s not able to talk. He communicates by laughing and smiling if he’s happy or crying and shouting if he’s cross or doesn’t want to do something. Believe me, he’s well able to tell us if he doesn’t want to do his physio, that’s for sure!

Hugh has a reread severe form of epilepsy. He stops breathing for very long periods of time. It means he can never be left alone, not even for a second, and he has to have a trained nurse to go to school with him. We carry oxygen and a bag and mask with us wherever we go, you might have seen paramedics use them in hospital dramas. 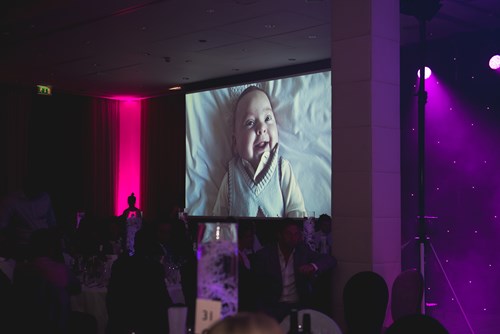 I’ve resuscitated him hundreds of times.
His condition is both life limiting and life threatening.
Hugh is unlikely to live until adulthood.

When we were first told about Hugh’s difficulties, there wasn’t a network of support out there for people without a diagnosis. It was a frightening and isolating time. Information and support shouldn’t just be given when a child receives a diagnosis, families can face many years, even a lifetime, waiting to reach that point.

Finding SWAN UK was an absolute life line for me. When Hugh was at his most poorly, when I was resuscitating him every day, I rarely left the house. Instead, I made friends with other SWAN parents online; people who could relate to the fear, to the relentless testing, to the unknown. It was a relief to know there were other families out there, feeling just as scared and isolated. I was grateful to realise we weren’t alone. Some of my closest friends are those SWAN parents I met in the early days; people who have been by our side in our darkest hours and who have rejoiced and celebrated the major and minor milestones and achievements along the way.

SWAN UK has grown and developed so much since then; from just the 10 or so of us sitting around our laptops at opposite ends of the country to local networks, coffee mornings, regular meet ups and days out.

Now when parents begin that journey of testing in the hope of finding a diagnosis, the geneticists and the paediatricians are telling them about SWAN UK. They can find others, both locally and nationally, that are in the same boat as them, people they can relate to and share their experiences with. It is vital that this support continues. Thank you to everyone at House of Fraser for all your help in ensuring that it does.” 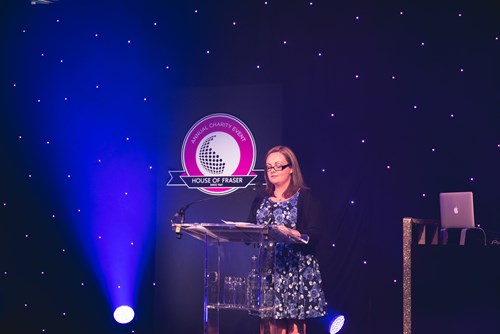