Tabitha is ten. Everything needs to be done for Tabby. I thought that things were going to be different when she was about five months old. I have an older daughter so I noticed she wasn’t meeting her milestones. We spoke to the nurse who came to see us and went to hospital to get lots of tests done.

I don’t remember much about any of the tests that followed but I remember two things that happened early on:

We found out Tabby was disabled when she was coming up to a year old. It was all a blur – being in hospital for this, that, and the other. The early years were all an emotional blob; we were letting her go to hospital for every test to try and find a diagnosis for her. She used to be in hospital every month, sometimes for protracted periods especially for brain tests. She was often there overnight and the tests never came back with anything. She hated having blood tests done.

Tabby doesn’t talk or sign. She uses a programme now called Eyegaze where she looks at a computer and we can see she’s in there, which is amazing as we never knew that before. We would love to have an Eyegaze at home but we don’t have one yet so whenever I talk to her, it’s the hardest thing as I don’t know what she is thinking.

She can never answer and I beat myself up for getting upset. It’s like a dagger in heart when doesn’t answer. As parent I want to have as normal a relationship as possible with her so I set up conversations as if she can answer back. It eats away at my confidence.

There is a sense of desperation in ‘not knowing’ and wanting to have something ‘normal’. I’m constantly thinking ‘why us?’ when I hear about someone else’s baby who can walk and crawl. Tabby is ten and still can’t crawl so it’s really difficult to see all that go on day to day.

I feel hurt several times a day; it’s like being caught in a bubble of hell – not that Tabby is hell – she is beautiful. It’s all in me. I feel like I have to be positive about Tabby and not get down about the ‘why us?’ feelings. She’s the best person I know. She has so much to deal with, and she does really well and she’s so happy. Tabby isn’t demanding. She’s great. I often think I’m the one with the problem. How selfish am I? She can’t even play with toys as she can’t control her arm movements, which makes me so sad. Playing with her can be exhausting emotionally. I wish I was a better person and could play with her all day, but I just can’t. I would like her to sit and explore the world but she doesn’t. We were taught early on to put toys around her but she wouldn’t play with them; she would retreat inside her own world. I’ve taken her to a special disability circus and she doesn’t seem interested. I don’t know if she can see it all properly but I think she can. I try to imagine what it must be like and it must be so frustrating not being able to communicate the most basic needs or not being able to control her body enough to interact with the world. Maybe it’s easier for her in her own little world. 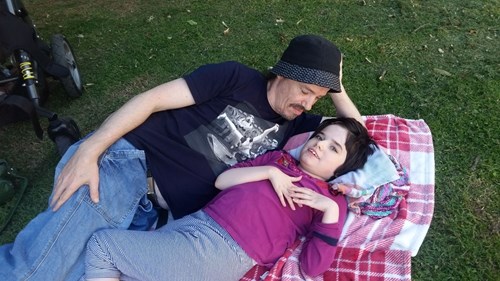 When I first joined SWAN UK I was down. I wasn’t talking about my emotions or my feelings. Lots of my friends didn’t want to talk about it and wouldn’t know what to say so they backed off. It’s not their fault. I get it.

The main thing that affects me is feeling different. I needed someone to talk to. It’s such a cliché but I found it to be true. I became a downer. I had no one who got it. With SWAN UK it’s very important to be reminded that there are others out there in similar situations – all with different problems but it’s still difficult for all of us. SWAN UK really helps as I don’t feel so alone.

I feel more able to talk now and am easing myself in; it takes ages for me to let people in, but it’s a start. I got to the point where I felt like I didn’t know who I was anymore – I was a dad, a partner, but not Justin Bartlett.

I feel paralysed most days in repetitive behaviour. It’s my fault as a parent that it got like that, but I’m now working on this and I feel like things are becoming different. I joined a band a year ago so that gives me somewhere else to go – another life, which I needed. We’re going to need a mobility car now to get around as Tabby can’t get into a normal car so I’m going to learn to drive, which will open up a lot more opportunities. I’m also beginning to think about going back to work. These things are slow though and most of my life is depressingly the same. There was a lot of emotional pressure when I was working and I’d get a call about Tabby. It was hard to concentrate on work. Once I was at work and Rachel called to say that Tabby was going to have to have her hip replaced. Rachel was so upset. I started noticing that I was having emotional outbursts at work. I was in pain and felt like I had no safe place to let it all out.

At work I was often getting annoyed which wasn’t good – just completely unravelling as a person so I decided to stay at home and help care for Tabby.

Then, I experienced cabin fever at home, which could be really upsetting as I feel like I have nowhere to go.

Tabby goes to an amazing school called Woodlands, which is attached to a mainstream school so it’s normalised for kids there, which is lovely. However, we live away from all our family so there is no one else to look after Tabby: no one to help when she’s in hospital – no support network whatsoever. Rachel’s family are very good but are too far away and my mum has her own problems so we’re not really in contact. Our family is me, Rachel and Tabby.

I’m not really fussed about a diagnosis; to me, it’s more about her quality of life. Unless someone can give me a positive outcome from her having to go into hospital and have painful, horrible tests, I’m not interested in doing it to her.

Rachel though is starting to look for answers again. If a diagnosis could lead to an improvement in her life, I wouldn’t mind, but the chances of that happening are very slim. If someone can give her a treatment that will improve things then yes I’d definitely do it.

It’s hard to tell what Tabby’s personality is like because she can’t communicate. But I can say she’s really independently spirited, almost to the point of having a laugh with you. She’s happy all the time and doesn’t ever cry. I spend a lot of time sitting and looking after her so I have so much time every day to think about things. I have to keep thinking of games to play with Tabby – baby games like ‘here comes the aeroplane.’ These are repetitive and I don’t get much back from her so it’s hard. She loves rough and tumble but is getting really big now. Physically she’s quite stable and strong despite having low muscle tone. Rachel worries about me doing it but Tabby loves it. We now have a sling as part of a hoist system so sometimes I’ll give her a little swing!

Tabby’s personality and how happy she is, is easily the best thing about her. I used to be very negative and she has everything to be negative about and isn’t so that’s a massive lesson! It’s made me grow up more and be more of a person.