‘So, that bit’s missing, lucky we found it really. It was Alder Hey that spotted it. We don’t know much about how it will affect him long term, it could be nothing or maybe something we have to keep an eye on, so we will see him again, often I expect.’

I stared blankly at the screen showing Cameron’s MRI, not really understanding what was happening. My brain ticked over … something’s missing … may affect him long term … what’s happening? Corpus Callosum?

Trying to make sense of my thoughts, I glanced at Sarah with a look of disbelief, but quickly it turned to sorrow as I realised her whole world had just been broken.

She knew that something was amiss from day one. She battled, fought, kicked and screamed at doctors, health visitors and local midwives who all passed us over, labeling us as ‘worried parents’ because despite already having had a week in special care after birth, he had been discharged.

Local midwives claimed he was a ‘sleepy baby’ and to ‘take some blankets off, he’s too warm, he will wake up.’ Eventually the head of district midwives came out to our home and took one look at this tiny, frail, grey looking child that would not eat, and sent us back to hospital. Cameron was checked in almost hypothermic, as he had no energy to convert to heat.

For ten days in the lead up to Christmas we walked up and down the halls, waiting, while they tried different ways of getting him to take milk, and different ways of trying to suppress the reflux that was bringing it back up again. They did different tests, x-rays, spinal taps and blood work until a specialist at Alder Hey, who was in contact with the hospital, suggested an MRI.

We were then ushered into the doctor’s office to be delivered the news that Sarah knew was coming. My super strong wife’s exterior broke slightly as a tear ran down her face. The doctor handed her some tissues, but I could see inside this was tearing at her heart and soul.

‘Is this the reason this is all happening then?’ I enquired trying to sound in control.

‘Well we don’t really know, it can mean so many things. It’s not exactly what’s causing it’, he said, ‘but it certainly must be having some effect for him to be this ill.’

I tried to think of a relevant question, but failed.

‘We do know it can have an effect on eyesight and other things like that, but we will have to wait and see unfortunately. I can try and get some other people involved, but for now that’s where we are at.’

The doctor stood and we all left his office and went back towards Cam’s room to see that my grandparents had come to visit. The doctor explained to them what had just happened, and we all sat in the room and stared at the plastic brain the doctor had brought in with him to help explain.

An eerie silence in a busy hospital room of not knowing anything, but knowing something, was a very strange feeling.

We made it home for Christmas day, displaying a strong exterior of a united mum and dad for Cameron’s big sisters, who played joyfully around him and shook rattles and pulled faces at him. With little eyes staring back up they were lost in the happiness of a new baby brother and Christmas.

The next two years were a blur and still are. Looking back now we have no idea how we got through it … he still ate very little, Gaviscon was poured into every feed and Ranitidine dripped into his mouth, taking two hours to slowly get four to eight ounces into him, only for him to vomit most of it up an hour later. We eventually got a gastro PEG, but it would be another year before he had the fundoplication procedure to stop him vomiting.

In between these operations was appointment after appointment, with different people all asking the same questions with no results.

There was nothing definitive, no ‘here we found it and we can now start to treat it,’ so we were left chasing an imaginary plaster that we could stick over this wound and then tell everyone it would be ok.

We spent three years waiting for someone to notice he was having seizures and to start treatment, that still to this day, no one has got right. We muddled on confused and tried to get on with everything as best we could.

As he got older we were introduced to various support people and groups. Meeting some parents was great, but there was almost a kind of sigh when the inevitable question came: ‘so what’s wrong with your little boy?’ and we weren’t able to answer.

I felt a slight selfish bit of jealousy listening to other parents talk saying: ‘oh my little one has “blah blah blah.”’ It sounds stupid to be jealous of such a thing, but when you have spent the years since, finding out that something is wrong, trying to discover what that is, and having to relay that in a conversation, was taking its toll.

I had looked online concentrating on the things we knew – his lack of corpus callosum and seizures – trying to find someone out there that knew something, but only turning up such a wide array of abilities, with nothing sounding like Cameron’s problems. I gave up looking and tried to concentrate on work and other things to distract me.

Sarah, however, was still looking and found an answer by not looking for an answer – looking at the people who too had no idea what was happening and via SWAN UK, suddenly there was a lifeline. Now no one had Cameron’s issues, but we all had one thing in common: the non-diagnosis and the frustration of being left on the sidelines waiting.

The feeling of knowing you are not alone was uplifting, as we spent more time on SWAN UK’s online forums chatting with people and making friends. Now, I’m not much of a poster, but I liked to read and chipped in where I felt I could. Sarah took to the Facebook group with a passion, getting information, helping others in getting information and making friends. I have sat in the evenings with Sarah reading people’s posts and it’s been an outlet for support.

As well as information, there were some funny posts and daft tales of things going wrong that made people laugh. There have also been dark times when swans have been in hospital and even sadder times when swans have left us, but as far apart as some people are by actual distance, strong arms held out over cyberspace with a virtual hug can sometimes mean so much to people.

We met Lauren Roberts down at Naidex in Birmingham and her vibrancy and passion for getting people’s voices heard shone through, (and we have met her a few times at various places – she is a remarkable individual who now owes me £20 for typing that). Then, there was a meet up for SWAN UK mums in Leeds and a meal in Liverpool. Sarah really enjoyed a fantastic night out with friends – people who knew the same struggles. We spent more time on the Facebook group, made more friends and then the family days out started. We went to Chester Zoo, a stay and play session at Jump Space in Stockport and visited special needs play centres in Preston and Warrington with other SWAN UK families. Each day out was as wonderful as the last and we had a fantastic time.

Cameron’s struggles over the years have been a test, but I swear that having somewhere to vent has been as helpful and as wonderful as actual family can be – we wouldn’t be as strong without our SWAN UK family. 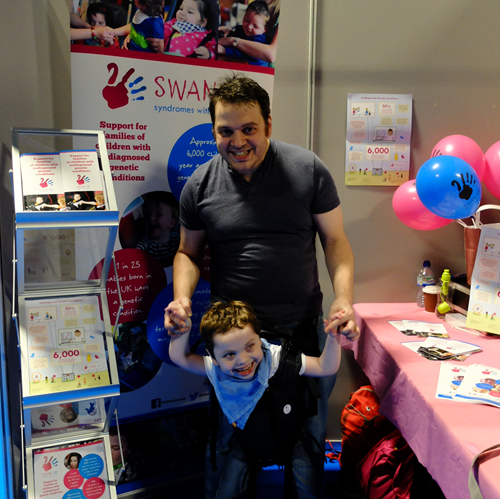 We all now walk under that banner of SWAN UK and we hold each other up. That’s what it’s for and we are so thankful for it and we walk more proudly because of it.