Here in Scotland I sometimes feel a long way away from my friends and family in the south of England. It’s not easy to travel with three children and all Benjamin’s equipment. So I’m super-grateful when people from home put their own comforts to one side and make the journey north to see us here, in the first house on the street, with the blue door. Jackie calls it ‘blue door number one.’

But sometimes visitors unwittingly put Benjamin at risk, as in our recent experience with chickenpox. One encounter led to months of frustration: the simple fact that he’d come into contact with the disease necessitated missing out on nursery, important outpatient appointments and vital respite breaks in case he was infectious to other vulnerable children. When he finally succumbed, like many children with complex needs it became, well, complex. For a couple of days he spiked temperatures and, despite our efforts to manage them, at five o’clock one morning he entered a tonic-clonic seizure. We gave rescue medication and called an ambulance. Two hours later in resus, the seizure was finally halted. A month later, after a second mad dash to A&E, five viral infections contracted due to the damping effect chickenpox has on the immune system, an unpleasant bacterial gut infection, and a recurrence of his previous pancreatitis triggered by the trauma, he’s finally home. Three weeks of breathing support, intravenous feeds, and constant nursing care in HDU. Two operations to obtain intravenous access to his ravaged little body. A month of sending Jackie off to extra nursery sessions and running ourselves ragged juggling childcare, work, and hospital. Caitlin learned to sit up, in hospital; was weaned onto solids, in hospital; cut her first tooth, in hospital. An exhausting month for all of us, which I could have avoided. 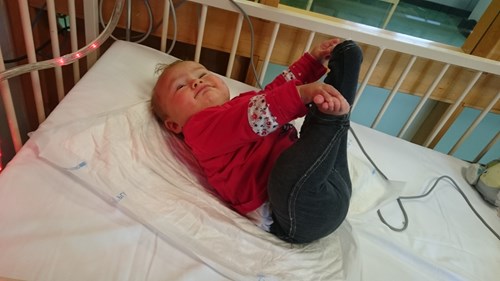 And now that he’s home, I’m terrified something similar will happen again. I know that however hard we try, Benjamin is always going to pick up infections: from nursery, from his sisters, from hospital. But should I try harder to minimise that risk? Should I limit the people we see, the places we go, and the people that come to see us? Should I close that blue door on the world?

I always wanted to have an open kind of a house. A house overflowing with children and dogs, artists and musicians, where the kettle was always singing, the biscuit tin always ready, and nobody minded if you walked in with muddy shoes. (I realise this is completely incompatible with my general controlling-verging-on-OCD type character, but I am getting to be an expert at cognitive dissonance). And funnily enough, thanks to Benjamin, we seem to be getting closer to that ideal. We’re becoming part of a community of people who help each other out, share in each other’s joys and sorrows, take on each other’s cooking and childcare, leave their garden gates open and their front doors unlocked. I don’t want to lose all that. But at the same time, and particularly after our experience this summer, it’s tempting to hide away, to discourage visitors and the risks they bring. To avoid the germ-ridden play-dates and the noisy parties in favour of snuggles on the sofa and the same old kids’ TV shows. To give in to the fear and close that blue door number one.

This time last year we were enjoying sun, sea and ftira (a bit like pizza) on Gozo, a small island off Malta, in the middle of the Mediterranean Sea. I couldn’t even have told you how far away from a hospital we were, and it didn’t seem to matter. I can hardly imagine it now. This past fortnight we were due to take another holiday – just a road trip to the south of England to catch up with friends and family we haven’t seen recently (or at all, in the case of one new cousin!), to attend a conference and revisit our old university towns. We could reschedule, but it’s tempting just to write it off, for fear of ending up in an emergency room far from home. To stay close to our local hospital and hospice, to the people that know Benjamin and his needs, to the community team that can come out at a moment’s notice. To stay safe behind blue door number one.

I can see how it’s all too easy for SN families to become isolated. Even sitting in the sports club while Jackie’s in her dance class, I find myself hiding away from the other waiting mums, feeling conspicuous as I set up Benjamin’s tube-feed, shielding him as snotty toddlers run around coughing without covering their mouths.

It’s easy to get caught up with caring; to find it just too much of an effort to get out; to feel that your old friends don’t understand and are bored by you; to lack the energy to make new friends; to avoid everything from toddler groups to family gatherings to mums’ nights out. To work from home; to shop on the internet; to hide away from the people who stare, the people who criticise, the people whose lives just seem too Pinterest-perfect, too full, too sorted. The fear feeds into all that. It makes me want to close that blue door and shoot the bolt home hard.

If we had gone south this week, we would have attended a Celebration of the Life of a very special little boy, a boy who brightened the day of everyone he met and many he didn’t (you can read his beautiful story here), who seized every day and loved every minute; and who we never really knew before it was too late. His passing shows us that life is too short to live in fear and guilt. Life’s too short to spend in blame and recrimination. Life’s too short not to take every chance, accept every offer and keep every door open.

This little boy that I never met shows me that I need to embrace the fear so that my children, including and especially Benjamin, have a full life, a full range of experiences and interactions. Much as Jackie would happily sit on the sofa and watch Ben and Holly all day, there’s no point having three healthy children with no experience of the world of ‘big people’. However much easier it makes life for me, I’m not doing them any favours overprotecting them now. They don’t deserve to miss out on meeting all the wonderful folk out there. The ones who come over only to help. The ones who can’t come to us but so appreciate a visit. The ones that simply do brighten up our day.

We can’t eliminate risk. The best we can do is to minimise it through preparation: through awareness, research, and planning. If necessary, through mapping the A&E departments along our route when we go away; through knowing who to call and where we can get supplies. Through vaccination, sensible hygiene, a decent diet and enough occasional sleep. Through learning when to struggle on and when we have to get to a hospital now. So yes, I will still be fearful, but I’d rather be fearful out there among friends, than fearful hiding away, behind blue door number one.

AS PUBLISHED BY SWAN UK MEMBER AND BLOGGER, ALEX DAVEY AT: THELONGCHAIN.WORDPRESS.COM

SHARE YOUR STORY WITH US BY EMAILING: [email protected]