Being undiagnosed. Was it my fault?

For what seems like forever, we have lived in limbo.

Freddie is my first child and during my pregnancy, which should have been exciting and restful, we found out at my 20 week scan that his brain wasn’t developing typically. To say we were devastated is an understatement. This marked the first day of limbo and uncertainty. We had a foetal scan every other week at the city hospital, Microarray, amniocentesis, bloods and goodness knows what else. Everything came back negative but each week the scans showed more and more problems for our sweet baby.

The doctors said at this stage they could only really tell us what it wasn’t and not what it was. We didn’t know you could have a disability without a name, something undiagnosed. But then, why would we?

We met with a Paediatric Neurologist who answered as many of our questions as he could but again he didn’t really have any answers, just that our baby would potentially have developmental difficulties of a mild to moderate nature. Although heartbroken and frightened, we decided to take the word ‘mild’ and run with it because the alternative was too awful. The consultants had on occasion offered us a termination but what shocked us most was that they could offer it, by panel, up to 39 weeks gestation.

Freddie was born at 35 weeks and he was so small. In fact, last week whilst my husband was clearing out some of the children’s old clothes he came across a tiny hand knitted cardigan which had been given to us by SCBU where we spent a week after his birth. All the tiny clothes we had bought were still too big. On this particular morning, I was feeling really happy and rushing to get the children out of the door but this totally floored me and floods of tears ensued. All the memories of those early days and all my feelings of love and pride for how far he has come but how painful the process has been and the courage we have had to find was all wrapped up in this tiny cardigan. (Really must invest in some waterproof mascara). Once I’d sorted myself out, I took a minute and tried to focus on the positives of his progress and the progress of our family unit. I’m acutely aware it could have so easily broken down but so far so good. We have worked hard on our marriage and our family and we do of course have three children now which is wonderful. 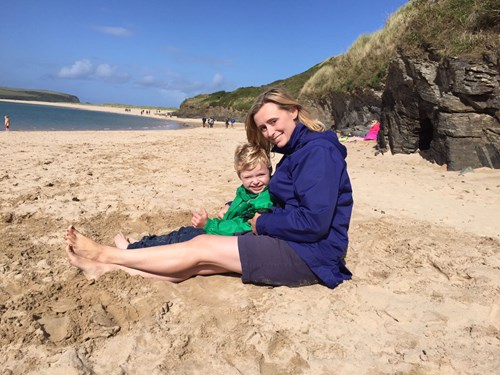 The one thing that never went away though, was the feeling of blame which I have carried around with me for a long time. Was it the the bottle of Prosecco I drank the night before I realised I was pregnant? Was it the massage I had or the products I used or was it the flu jab I naively had in early pregnancy, without really knowing the implications? It’s been difficult not to dwell on it. We did receive a diagnosis from the DDD study (ddduk.org) earlier this year which has taken some of the pressure off but so far, Freddie is one of only 5 known in the UK with the same gene variant. So you could say we are still undiagnosed to a degree, as the European Union states that a rare disease is defined by one that affects less than 5 in 10,000 of the general population. Other than having the cause of his difficulties and knowing it is De Novo in him and not hereditary, we don’t have much else and no prognosis. Even with the diagnosis, I still wonder if Epigenetics was at play? I’m quite sure no medical professional is ever going to discuss this with me seriously but you can’t help having a gut feeling about something.

Parenthood is filled with opportunities to feel guilt so for all you parents out there walking a similar path, I hear you.

I am now in a place where I practise focusing on the here and now and the future and not the whys and hows because I know nothing will change by knowing. It’s the only way forward to having peace. I do occasionally revisit Dr Google and the Epigenitics question that hangs over me but mostly it is now a story running in the background of my mind. If you can get to the point where it is quiet dialogue whispering in the background and not shouting at you, then you can claim some peace and let go of the guilt which shouldn’t really be there.