Ah yes Beans. I’ve ‘bean’ meaning to post a little more about this for a while but that thing called every day life seems to have gotten in the way recently and between hospital appointments, ironing, food shops, medical supply requirements (arguing discussions with pharmacists) and my eldest turning 16 (how?!)

I have ‘bean’ more than a little distracted (I promise I’ll stop with the awful puns in a bit but let let me milk it a little longer – I spend far too much time in a house dominated by the male species where any conversations that involves even the remote possibility of ‘popping off’, wind, botty-burps or farting depending on the age bracket the smut-team fall into is de rigeur and of course beans and there veritable delights promote such delicious wind related humour so I may as well join in; I long ago gave up fighting the system!!)

Anyway, yesterday saw the start of Undiagnosed Children’s Day events kicking off in my home town of Knaresborough for the Yorkshire Massssiiiiiiivvvveeee. Us Yorkshire lot, are known throughout the SWAN UK community for our love of events and celebrating. Hard. I hate to brag but it’s true, we know how to party ‘oop north!”

Last year we had a fun packed adventure day in Flamingo Land which was enjoyed by many families. This year however, we wanted to promote a hugely inclusive, family based event and also give our SWAN UK coordinator, the opportunity to fulfil a childhood ambition – sitting in a bath of baked beans!!

Frankly, why she ever dared share this little nugget of information on a Facebook post within our SWAN UK support group, I think many of us are still wondering – and I am pretty sure after yesterday’s shenanigans, she has made a mental note NEVER EVER to join in any of the light-hearted banter that often trickles through the more serious and support related queries that SWAN UK members post every day!

Last summer, group members were discussing ways we could raise much needed funds for SWAN UK, to support our ever growing members, to sign post more people, more promptly to the group and to continue putting smiles on faces by sending balloons to children in hospital, funding outings, coffee mornings, raise professional awareness and such like. This was especially important bearing in mind that our big lottery grant was coming to an end. In fact, its timely posting with Undiagnosed Children’s Day being on us imminently (29th April 2016) to let you know that the grant just ended this April.

Ideas were bandied about left, right and centre and having reminisced about some of the mad-cap idea of the past that the ‘elf n safety police’ would have nightmares about people doing today, our coordinator lamented the fact that her Mum had never allowed her to sit in a bath of baked beans to raise money for charity. Personally speaking, I think her Mum was on to something there but never one to look a gift horse in the mouth, I can’t remember exactly who suggested it but the idea gathered momentum (hurtled really) and soon our would be bather found herself agreeing to take a dip, providing we could raise a significant amount of funds for SWAN UK. Supermodels of the late 80’s/90’s famously said they didn’t get out of bed for less than £10,000, well our very own Lauren was prepared to dunk for a more moderate sum and we aimed to reach a target of £4,000 or thereabouts. Aim high, reach for the stars!

Of course these things don’t just happen overnight. There was the not so small matter of organisation, location, the bath itself and Lauren’s own commitments (she doesn’t seem to need sleep or maybe it’s not factored into her job description?) Anyway, I can speak from personal experience when I tell you that the woman is a one women power house who travels the length and breadth of the country on a mission to spread the word of SWAN UK far and wide, especially since our project to recruit SWAN UK parent reps (coming soon to a town near YOU!) has really taken off and she personally oversees training, administration, queries and hand holding for initial presentations to the wider public, plus the myriad of other jobs that fall under her professional capacity.

It was on one her visits to myself in Yorkshire when we went to a meeting with a local organisation (https://www.henshaws.org.uk) to discuss how we could raise our profile and mutually assist one another that the idea of holding our very own Undiagnosed Children’s Day at their fabulous centre arose. Even more fittingly and I’m still not quite sure how this conversation evolved but it matters not, it turned out that Henshaws just happened to have a disused bath lying around which was perfect for our requirements.

Little did Lauren imagine on that cold, dank and foggy morning that a mere 4 months later, she would be sat in a bath of congealing orange sludge which could probably be smelled for miles around. To her eternal credit, she stuck it out for a solid 30 minutes whilst people (mainly small children but a hefty dose of evilly cackling adults too) poured yet more beans over her, paying extra for the privilege. Not only did Lauren undertake this herculean task (having chatted it over with her, it would seem this was worse in her eyes than her skydive a few year previously!!) but one of our younger SWANS was brave enough to jump in with her which was very entertaining too. We were able to live stream footage of the frivolity into the group and I have no doubt that in the week of Undiagnosed Celebrations that are due to follow, there will be plenty of opportunity for the wider public to view. In the meantime, I’ll add this little gem below: 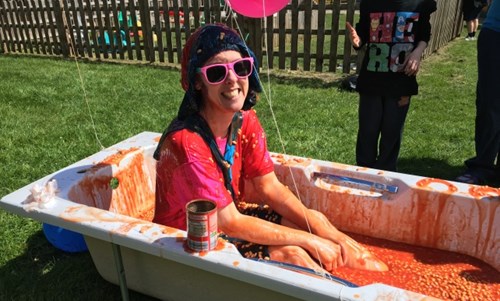 You will note she was even in SWAN UK colours in the old-fashioned bathing style suit that her Mum made especially for her! I bet her Mum was having the last laugh really!

If you would like to donate and help us continue our fund raising mission, you can do so by clicking: http://www.justgiving.com/BeanGate When I last checked we had raised an incredible £2376 but any more donations, big or small, are gratefully received!

Suffice to say it was a day of fun and laughter. Whilst personally for me, the bean bath was the absolute highlight, there was plenty more great stuff to partake in. We had a local organisation turn up with all sorts of weird and wonderful animals that could be petted/stroked/taken for walks (seeing an iguana in a fetching purple coat on a lead being paraded on the lawn, well more of a sun bathe really was entertaining!) There was a face painter, music, craft/modelling workshop, lawn games, some very lovely ladies doing make up demonstrations and hand massage and a general opportunity for parents, SWANs and just as importantly siblings to get together, chat and form strong bonds of friendship. My own children are already asking when their newly made friends can come and visit us again.

On a personal level I felt like a whirling dervish much of the day and didn’t get the opportunity to talk to everyone I would liked to have done but I hope that all those who attended felt part of something wonderful. After all SWAN UK gives those of us without a label, without a diagnosis or a recognised condition, a place to call home!

With hugely grateful thanks to everyone who supported and helped in anyway possible both on the day itself and the run up there too. Please keep sharing, donating and signposting.

As published by Lisa Beaton at definitelynotthewaltons.com