The early days of an undiagnosed condition with a small child are very strange. There’s this weird tightrope you feel like you’re walking all the time.

Without a diagnosis you allow yourself to think, ‘perhaps it’s nothing, perhaps it will go, perhaps I’m just being overprotective and neurotic.’

Then something happens and you know deep down that it’s wrong. That other parents and other children aren’t having these issues. Before you know it, you’re in A & E explaining to a doctor that you don’t have a diagnosis but there’s definitely something wrong. Yes, I do know children get sick sometimes, and yes, I do know the difference between viral and bacterial, and no, my child is not screaming for hours at night because she’s a toddler. She’s in pain. Before you know it, you’re the one trying to convince the doctor that it’s not nothing, it’s not going to just go, and you’re not just overprotective and neurotic.

Without a diagnosis life is a limbo state: a tiring emotional stress that never really ends or eases. Grief, without any closure.

So you come to expect not knowing. Try to come to terms with it. Think on the bright side. Put it out of you mind. And then, as ever, something comes along to disturb the peace. This time it was results and a treatment plan. Here’s the good news; there are no extra lesions in Tilly’s brain. This is genuinely really, really good news, and not something that we were taking as a given. For the first hour or so after the appointment I was focused here. On the bright side. But with good news comes bad news; she has brain inflammation and muscle wasting. I kind of knew this already. I’ve essentially been telling doctors this for a year and a half. But it sounds different coming from a neurologist to the way it sounds when I’m saying it. When I say it, it sounds flexible, short term, reasonable. When a neurologist says it, it sounds serious, life limiting, wheelchair-y. 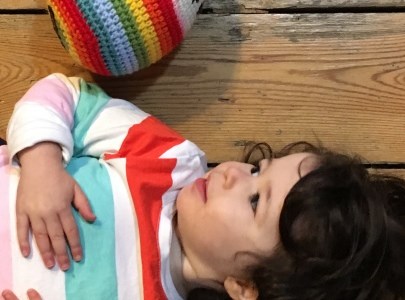 Then there’s the drugs. Tilly is now on a cocktail of drugs including immunosuppressants. Presumably for life. There’s no more limbo. No more explaining neuroses to doctors. She’s officially now sick. They’re prepping local doctors so when we go to A & E, they’ll know about Tilly. No longer ‘if’. Now it’s ‘when’. As much as anything because immunosuppressants make you much more likely to get sick in the future.

The thrill is that now we’ll never know if it‘s the underlying illness or the medication making her sick.

I guess the limbo has changed location. Before it was sick or not. Now it’s medicate or not. The side effects are batshit crazy. Really horrific, don’t read the leaflet or google it unless you want a break down crazy. I kind of know I have to medicate, that there’s no real choice. But without a diagnosis I can’t help but feel like there is a choice. Like maybe if I just shut my eyes and stop going to the doctors it will all go away.

I know I’m wrong, but I really wish I were right.