The story goes right back to the first time we saw her at our twelve week scan during pregnancy. At this scan the sonographer looked very concerned and told us this didn’t look good at all – we were immediately taken to another room and soon called in to see the consultant who diagnosed her with cystic hygroma (a build up of fluid around the outside of the body). At this stage we were given three possible outcomes, with the most likely being that these cysts would grow and eventually the baby would die. This was devastating news to take in but we tried to remain strong. CVS tests (prenatal tests that diagnose chromosomal abnormalities) were taken to test for syndromes such as Turner Syndrome and Down’s syndrome and these came back clear. Throughout pregnancy, we were going from scan to scan without knowing what to expect but miraculously, the cystic hygroma gradually resolved and we began to realise what a fighter we had.

I was induced at 37 weeks due to Anna now having short long bones and they were concerned about her size. At this point we were very eager to bring our daughter into the world. Unfortunately things didn’t go so smoothly. We had a bad experience in the hospital as they were short staffed and we were no longer seen as high risk, therefore not monitored as frequently as we should have been. Anna had a face presentation birth, arriving brow first and taking the midwife by surprise. Born at 7.13pm, Anna was 4lb 8oz and battered and bruised. We were able to give her a big cuddle but she was soon taken away with breathing difficulties. She spent the next ten days in the neo natal unit. She was named Anna, meaning grace of god.

After ten days, we had seen dramatic changes in Anna – what a beautiful girl she was becoming …

At this stage we were relieved to be going home and nobody had any further concerns. Our health visitor was very supportive, and it soon became clear that Anna wasn’t developing at the rate expected. At about six months old, we began to notice subtle features that caused concern. Anna used to fling her arms backwards, twisting her hands back, reluctant to reach forward; her head shape was unusual and her eyes had epicanthic folds, which meant the skin of the upper eyelid covered the inner corner of her eyes (one of the many new terms we have learnt). The GP referred us to the paediatrician and this is where our Anna really began to develop her swan wings.

The paediatrician confirmed that Anna had mild dysmorphic features but was still within the range of normal development. At this stage he referred us onto many different professionals. We were reassured at this stage, being thankful for the vast support we were getting.

Further along this process, an X-ray showed that Anna’s skull had fused prematurely (premature fusion of the lambdoid suture) and therefore we were referred to Birmingham Children’s hospital for further analysis. Positively, a CT scan carried out showed that Anna’s skull was perfectly normal. This was a huge relief, but confusion was added during this appointment when we were told that she would never have had cystic hygroma during pregnancy, as this doesn’t resolve itself.

We have yet to understand the truth behind this – yet another mystery. Genetic testing came back as normal, and they then retested for Noonan’s syndrome, a condition linked with cystic hygroma. This also came back as normal. Again we were relieved but still had no answers.

Anna has always had a strong character. She is a beautiful and determined girl, who has always shown a fighting spirit. Being a contented child, Anna rarely cries and shows enjoyment through rough and tumble play. She enjoys sensory activities, particularly music and lights. Throughout time, it has become more noticeable that Anna is different to other children and she finds numerous things difficult. The most noticeable aspect is her lack of mobility, unable to crawl or walk unsupported, often leaving her frustrated as she is unable to reach things that she is interested in. Anna currently gets support with speech and language, fine motor and gross motor development and we have early years inclusion specialists on board too. We have also been given a grant for six one-to-one private swimming sessions which Anna loves! We are currently waiting to see if Anna can have a place in a special needs nursery in addition to her mainstream nursery. Although this has been difficult for us to accept that she might need to go to a special needs nursery, the opportunities they can provide are second to none.

Although we are getting a great deal of support, it is still difficult to understand the level of cognitive skills Anna has and whether this will improve as time goes on. Without a diagnosis we are left with no answers. We have no idea what the future holds for Anna; will we ever get a diagnosis? We she be able to live an independent life? We may always be wondering. The last eighteen months have been very difficult – taking its toll on our health, relationship and work. Our GP explained that accepting you have a child with additional needs means you go through stages of grief. We can completely relate to this, having experienced denial, guilt, anger, worry, envy and sadness. This was made even more difficult by my partner and me going through these stages at a different pace, meaning we couldn’t always understand the other’s emotions.

Through social media I found out about Undiagnosed Children’s Day and saw a link to SWAN UK – I looked into it and have never looked back. The support we have received has been so comforting and kind. Within a week of signing up, Anna received balloons in the post with a note telling her she is amazing! This came as such a lovely surprise to us all. Since then I have also used the SWAN UK Facebook group to find other swan mummys in our local area. I was lucky to find a lady who lives down the road.

We met up recently and shared experiences; we feel very much part of the swan family and are so grateful for all the support we have been given. 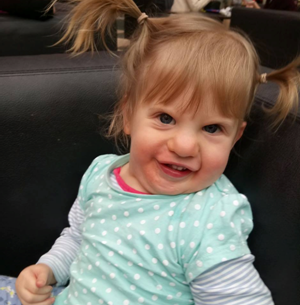 Anna is two next week and although we’re excited it’s still hard not to compare her to children of the same age. We have learnt to try and stay positive and take each day at a time, not looking too far into the future.

Anna is even more special to us and we have received so much support and new opportunities have opened up for us. We are incredibly lucky to have such a loving family around us and amazing friends who have all shown us great support throughout this time. I was told recently that God gives special children to special people so we feel very blessed to have such a beautiful, happy and strong daughter who brings such love to the lives of so many. Anna has a special aura around her, bringing smiles to everyone she meets.