What is dominant inheritance?

Our bodies are made up of millions of cells. Most cells contain a complete set of genes. Genes act like a set of instructions, controlling our growth and how our bodies work. They are also responsible for many of our characteristics, such as our eye colour, blood type and height. We have thousands of genes. We each inherit two copies of most genes, one copy from our mother and one copy from our father. That is why we often have similar characteristics to both of them.

Sometimes, there is a change in one copy of a gene which stops it from working properly. This change can cause a genetic condition because the gene is not communicating the correct instructions to the body. 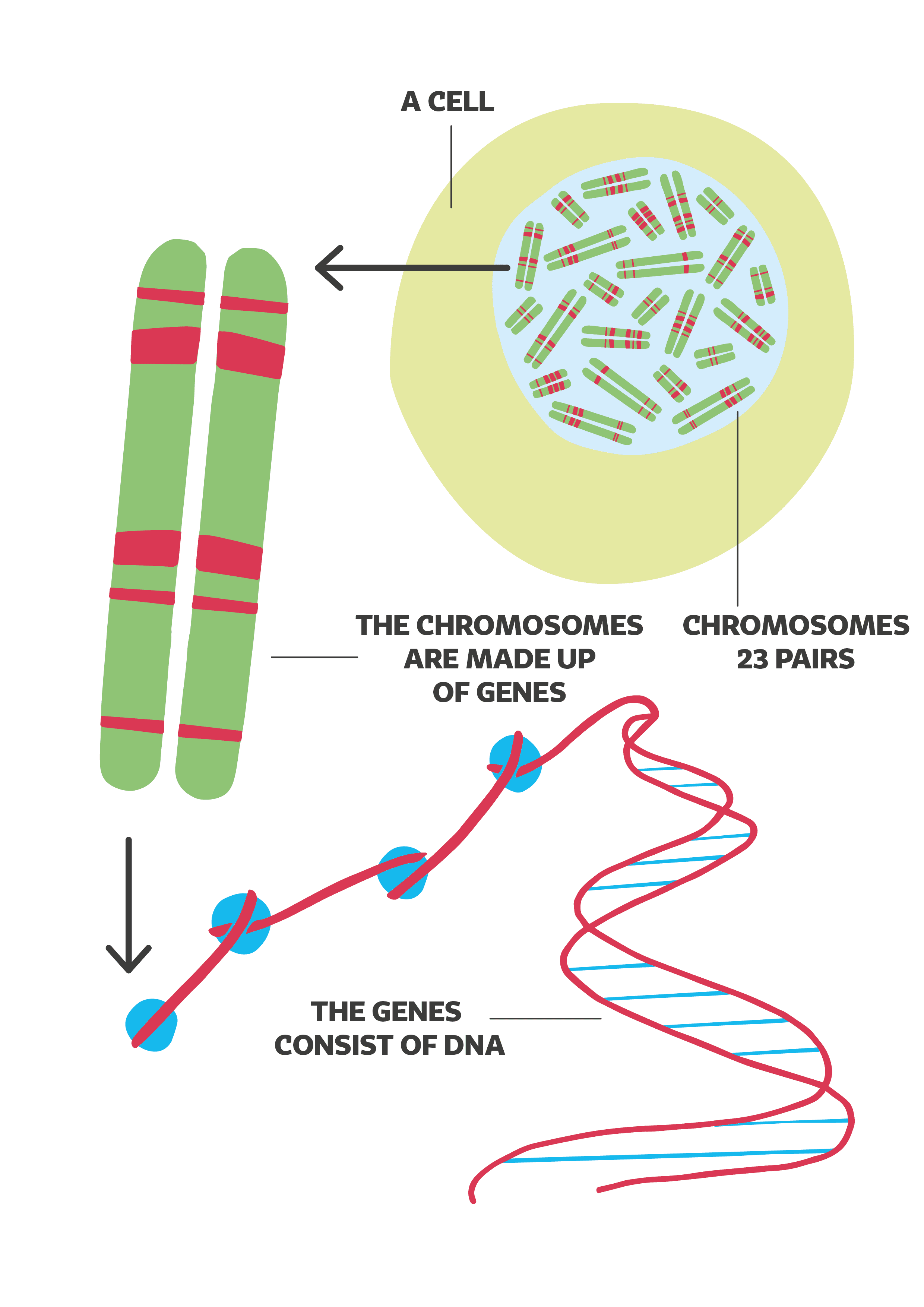 This picture shows a cell, DNA and chromosomes

What is autosomal dominant inheritance?

Some conditions are passed on through the family in a dominant way. This means that if a person inherits one normal copy of a gene, and one changed copy, the changed gene is dominant over, or overrides, the normal copy. This causes the individual to become affected by the genetic condition. The particular genetic condition that the person is affected by depends on what instructions the changed gene was supposed to give.

How are dominant genes inherited?

When one parent has a changed gene, they will pass on either their normal gene or their changed gene to their child. Each of their children therefore has a 50% (1 in 2) chance of inheriting the changed gene and being affected by the condition.

There is also a 50% (1 in 2) chance that a child will inherit the normal copy of the gene. If this happens the child will not be affected by the disorder and cannot pass it on to any of his or her children.

These possible outcomes occur randomly. The chance remains the same in every pregnancy and is the same for boys and girls. Very occasionally an affected person will have two copies of the changed gene, so all their children will have the condition. 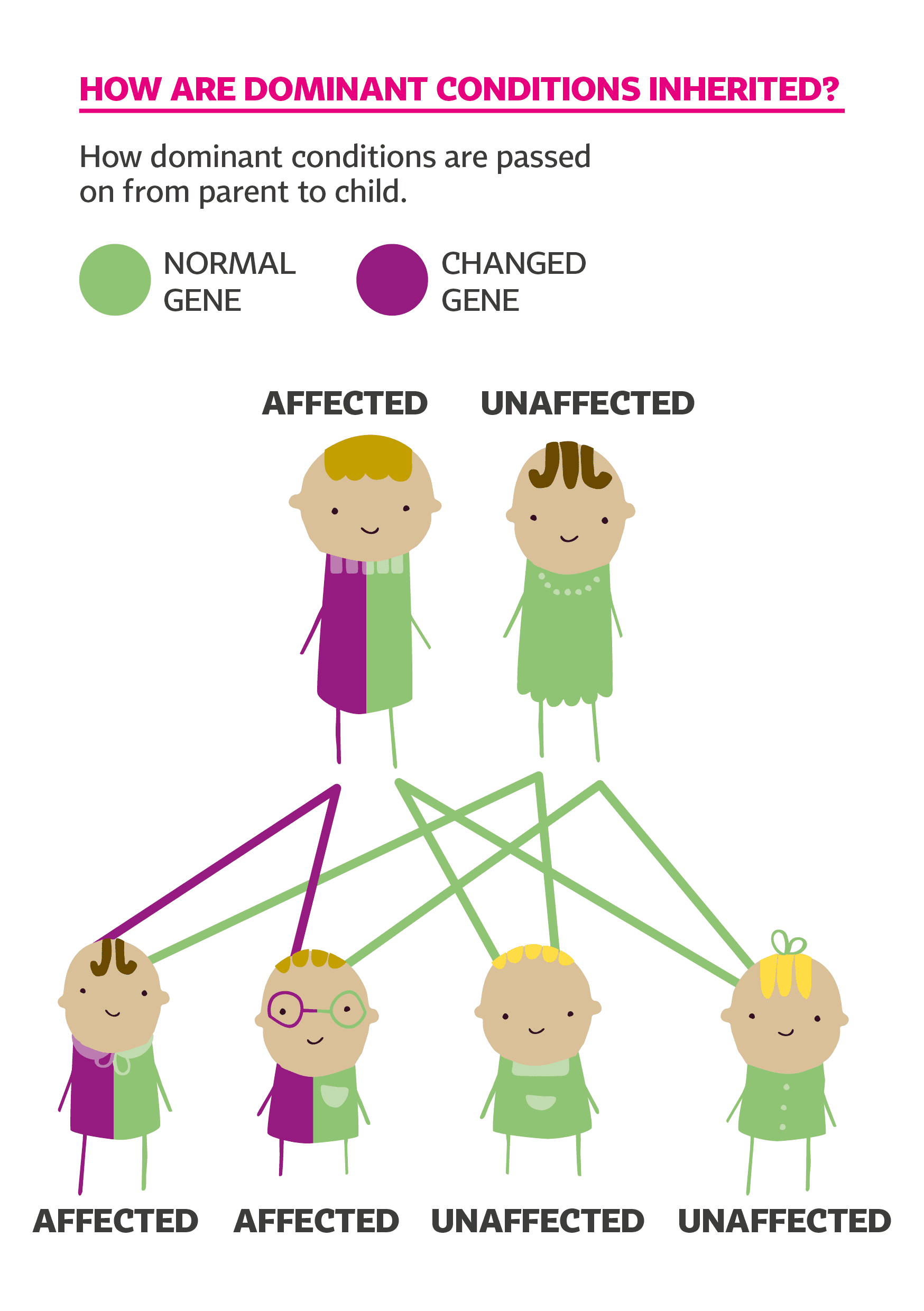 Why does a genetic condition sometimes appear to miss out a generation?

Some dominant genetic conditions can affect family members very differently. This is called variable expression. The condition does not actually miss out a generation, but some people have such mild symptoms of the condition that they appear to be unaffected. They may not even know that they have the condition.

In conditions which occur later in life (adult onset conditions, e.g. inherited breast cancer and Huntington’s disease) people may have died earlier or of unrelated causes leaving no time for the condition to appear, or the correct diagnosis may never have been given. However, the parents may have passed on the condition to their children.

What if a child is the first person in the family to have the condition?

Sometimes a child born with a dominant genetic condition can be the first person to be affected in the family. This may happen because a new gene change has occurred, for the first time, in either the egg or the sperm that went to make that child. When this happens, the parent of that child is not affected. The parents are very unlikely to have another child affected by the same condition, but you should always discuss the risks with your doctor since there are rare occasions when this could occur. However, an affected child, who now has the changed gene, can pass it on to his or her children.

For some dominant genetic conditions, it is possible to have a test in pregnancy to see if the baby has inherited the condition. This is something you should discuss with your doctor or healthcare professional.

First published January 2007. This leaflet was developed by Genetic Alliance UK, modified from leaflets produced by Guy’s and St Thomas’ Hospital, London; and the London IDEAS Genetic Knowledge Park, according to their quality standards. This work was supported by EuroGentest, an EU-FP6 supported NoE contract number 512148.

Reviewed and updated January 2017 with help from Prof. Shirley Hodgson, Emeritus at St. George’s, University of London and members of SWAN UK (syndromes without a name) and Genetic Alliance UK.