I remember when Bronwyn was born I never got to see her as she was too sick to come home from hospital. My mum explained to me that Bronwyn had a rare chromosome condition named 1p36 duplication, which caused Bronwyn to have pulmonary branch stenosis, pyriform aperture stenosis, pulmonary artery branch stenosis, central sleep apnoea, hypertonia and hypermobility. 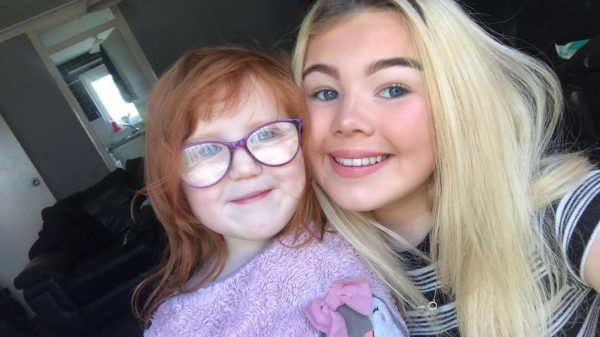 For the first year Bronwyn wasn’t allowed out of hospital. I spent most of my time visiting her in the ward, and we missed that family time at home together that most families had.

For the next two years, Bronwyn was constantly in and out of hospital which made it hard for me and Bronwyn to bond as most other sisters do.

As Bronwyn got older she started to become better, defying all the odds and all the doctors’ expectations. Bronwyn’s life expectations changed month after month, with the doctors saying Bronwyn would not live past one year, then three years and then five years old. Doctors also said Bronwyn would not walk, talk, communicate or do other things that other children do, but she proved everyone wrong and now goes to a mainstream school.

SWAN UK helped my mum the most as they provided a support page on Facebook which acted like like a big advice group and was what my family needed.

SWAN UK also provided days out where you could meet parents going through a similar experience, which meant they could provide each other with advice, tips and tricks.

These days my sister lives a somewhat normal life, attends school, loves her hair being done and loves spending time with me and my family.