My son is called Riley Rae. He’s 28 months old and the youngest of six.

We took part in the 100,000 Genomes Project last year. We haven’t heard anything yet but we were informed it could take years and still may never get answers.

Riley has global developmental delay, low muscle tone and hypermobility. He has sensory issues in every aspect – touch, taste and smell. He only eats a very small variety of blended food and is non- verbal. He has had a few genetic tests and an MRI scan.

He has seen several specialists and everything has came back clear. He’s a mystery!

It was my health visitor that first noticed that Riley Rae was behind in his development and referred him for physiotherapy when he was eight months old. He then started attending a child development centre where he gets a lot of support. He sees physiotherapists, occupational therapists, speech and language therapists, a paediatrician and of course the fantastic nurses that run the centre. Every single person we’ve met there have been fantastic and really supportive! There are also other parents that are in the same situation as us so it’s good to have people that understand what we’re going through. 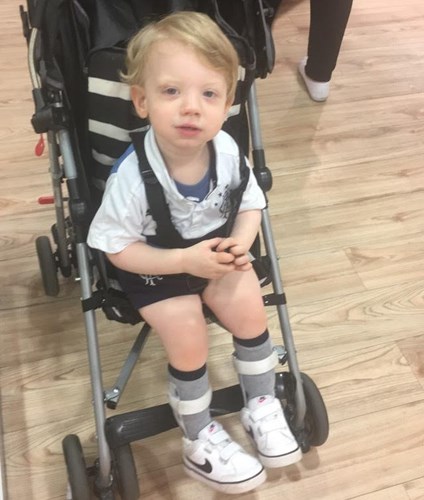 Now that Riley is a bit older things are harder. He doesn’t like to play, doesn’t like going out in his buggy and doesn’t like swings, grass or sand so we are limited in what we can do as a family. If we go out for a meal he doesn’t eat but is in his element watching Mickey Mouse on his dad’s phone. We have Mickey Mouse playing from the minute he’s up until the minute he goes to sleep.

I would be lying if I said I wasn’t nervous about his future. It’s the unknown – will he talk, eat, make friends?

Things have started to be put in place for when he starts nursery in January. He will have one-to-one support which makes me feel less anxious. If I could change anything it would be that first he would eat and I would love it if he could talk, but he’s really happy and healthy and as long as he’s smiling we will all be smiling with him.