Isie is the face of shopping centre campaign

‘Busy’ is nothing new to us. It’s been non-stop (or feels that way) since Isie was born three years ago. Isie is our second child and she has an older brother Luca who is six. Isie was born with a very long list of congenital birth defects including craniosynostosis, cleft palate, congenital heart disease, only one kidney, no spleen, various skeletal abnormalities as well as feeding problems. She’s partially sighted and is delayed in all areas including her speech and gross/fine motor skills. It’s been a tough few years, endless hospital appointments, surgeries, infections, therapies! But….Isie is doing amazingly well and has far exceeded everyone’s expectations!

We joined SWAN UK when Isie was six months old….I was looking for support as at the time we were feeling very isolated despite great support from friends and family.

A simple Google search found SWAN UK and our lives were changed as we found a community of families just like us!

Isie is quite a little character and my sister’s friend had mentioned Isie a lot to her mother, Sylvie, who is the Marketing and Events Manager at our local shopping centre in Fareham, Hampshire. For many years Fareham Shopping Centre has supported the RSPCA through its Halloween and Christmas events but Sylvie felt it was now time for a change and said the management team wanted to support a local family…she immediately thought of us! We are involved with many charities that help Isie but SWAN UK has been there for us on a daily basis! It was agreed that SWAN UK would be the new charity with Isie simply being the face of the campaigns.

On 30th October the shopping centre held a free Halloween party for the day. They had various activities for the children including, face painting, colouring competitions, balloon modelling and magic shows with donations going to SWAN UK for these activities. Luca, Isie and I attended. In true Isie style she was not interested in dressing up as a pretty witch or cat instead she chose a bright green and blue monster costume! It was a lovely day, both Luca and Isie really enjoyed themselves and we collected £250 in donations. 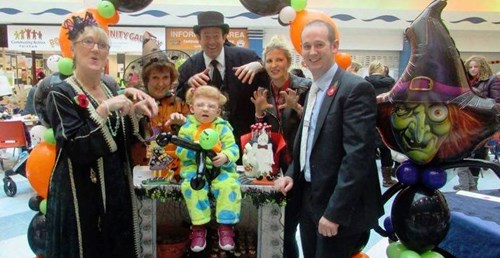 On 26th November we were back in the shopping centre to launch their Christmas display, giant snow globe and Santa’s grotto which was officially opened by the Mayor and Mayoress of Fareham. The Christmas display and giant snow globe will be in the centre all through the Christmas period and into January again with donations going to SWAN UK. It was lovely to meet the Mayor and Mayoress of Fareham. We spent some time discussing the meaning of SWAN and the difficulties faced by families with undiagnosed children.

They were astounded to find out that 50% of disabled children have no unifying diagnosis for their problems. After the official opening of Santa’s grotto Isie and Luca were lucky enough to be the first children to visit and meet Santa. Luca was more pleased about this than Isie and the photo shoot of this encounter was challenging to say the least! I’m looking forward to seeing Isie’s expressions in the photos! This really was a lovely evening and left us feeling very festive. Isie particularly enjoyed watching the local school children who had come to perform Christmas songs and carols.

We had the opportunity to promote SWAN UK and talk about the challenges families like us face every day.

We met some lovely families in similar positions to us or people who knew of families like us… expect some new members to SWAN UK soon!

If you are interested in fundraising to support our work please get in touch: [email protected].