By By SWAN UK Member, Simon

Hi, my name is Simon. I’m married to Elaine and we have two, now grown up, children called Joanne and Kathy. Kathy is 25 years old and has an undiagnosed condition. 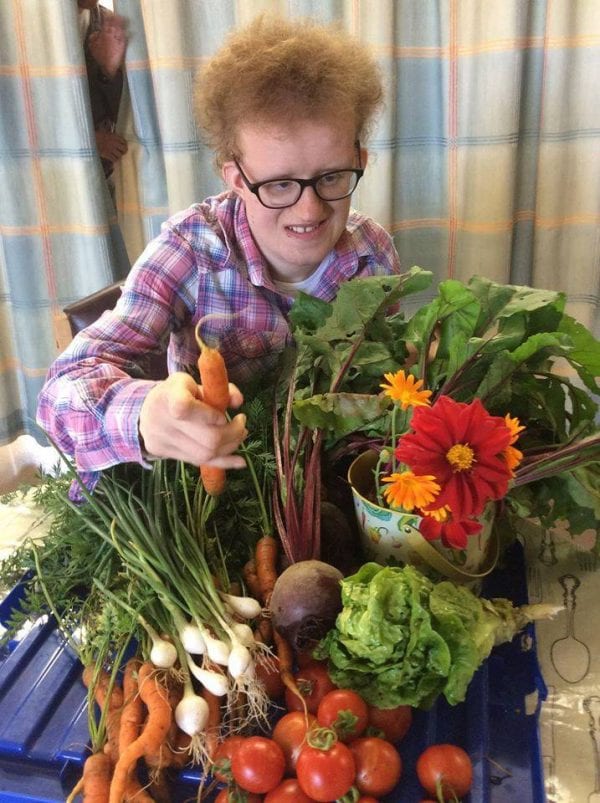 Kathy has a very engaging and endearing personality. She can be cheeky and mischievous but can also be a bit of a worrier and can get anxious in unfamiliar environments or with new people. She loves music, The Beatles particularly, and when she’s in the mood sings a very long medley of their songs! She loves to paint and draw (I think you’d describe them as abstract!), enjoys Lego and watching Laurel and Hardy. For some reason Kathy doesn’t like rabbits or balloons, and changes to routine can upset her. She is very popular with all the staff at the day care centres she attends and at her respite home that she visits every two weeks.

Kathy has many complex needs and disabilities. She has learning disabilities, developmental delay, scoliosis and autism – the autism was only officially diagnosed when she was 18 years old. She has an unexplained muscular condition, skeletal deformities and a condition known as left atrial isomerism. This condition was discovered when Kathy was about 20. She went into Glenfield hospital for heart surgery after it was discovered that she had a very large hole in her heart. A device was to be fitted to cover the hole, a routine operation, or so they thought. It turned out that all of Kathy’s arteries enter and leave her heart on the left side – basically her arteries all seem to go in the wrong direction. That routine operation was cancelled and she went back a few weeks later. After  five hours in theatre the device was fitted by going through the liver. The operation was a success and now Kathy has never looked healthier.

When Kathy was a baby she had lots of difficulties with her breathing, feeding and reflux. When she tried to feed she would stop breathing and go blue and if you laid her on her back the same thing would happen. This was because she had an enlarged epiglottis and surgery was required to correct it. The surgery was a success, but the recovery was slow and stressful, and Kathy spent several weeks in intensive care.

Kathy has had corrective surgery on her legs, ankles and hips and she also has photosensitive epilepsy which has been very well controlled. It’s difficult for me to say what part of her condition is the most significant.

Kathy has taken part in the Deciphering Developmental Delay (DDD) study. We became participants on the DDD study after we were referred to it by her behavioural psychologist six years ago. After five years we were told that no diagnosis was found but that they intend to continue with their search for a further two years. We currently have one year left.

We realised that things were going to be different the moment Kathy was born. During my wife’s pregnancy nothing abnormal was detected and Kathy was born full term, but it was immediately apparent that not all was well. 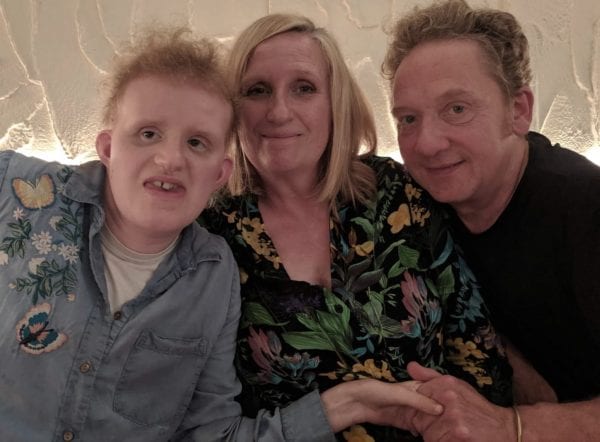 In the beginning it was of course scary, but I was never intimidated by my roles or responsibilities. I knew life would never be the same but life is never the same regardless of disabilities – all children change your life. Having a child like Kathy has changed my view of the world, life and our place in it. Things that seemed important before are now irrelevant. When Kathy was two years old my wife became ill and I left work to care for Kathy, support my wife and bring up our other daughter, Joanne (Jo). That is what I did for twenty years and I now work for Mencap.

My immediate family (myself, my wife and my other daughter) are very strong and close although my wife has suffered terribly with severe depression. This was when Kathy was 2yrs old until about 7 years ago, then things settled and she has been stable since then. Kathy’s Grandparents are no longer with us, she was close to them although they had difficulties understanding and dealing with Kathy’s problems. It’s fair to say the support from the wider family has been minimal.

The main challenge we face due to the lack of diagnosis is uncertainty. I’m uncertain of Kathy’s future health, her life span. I’m uncertain about the support network I have struggled to build for her which seems to be under constant threat from cuts and financial restrictions. Having said that, the best thing about our journey so far has been the love and getting to understand the things that really matter.

The future is something we rarely think about as it’s in the future, however we have come a long way and Kathy’s health is quite good and she is settled and happy. We have found a suitable care provider for her when we decide we’re too old, so we are trying to be optimistic.

If you are interested in sharing your family story, get in touch with us: [email protected].