Ryan lives in south west Scotland with mum, Demi (me), big brother Matthew and little sister Marlowe. Ryan is ‘almost 13’ (as he tells everyone), Matthew is 14 and Marlowe is two. We also have an ageing black Labrador called Jade.

For many years, Ryan was believed to have foetal alcohol syndrome due to maternal drinking, however I always believed he had a genetic condition because of his significant levels of dysmorphia. When Ryan was five we finally saw a geneticist, who agreed that a genetic condition was likely, however we are still no further towards finding out what that condition might be.

Ryan is an absolute trooper and rarely lets anything get to him (except his big brother winding him up!) He attends a mainstream school and splits his time between the learning base and mainstream classes. He loves horses, horse riding and also drives carriages. Ryan took up skiing two years ago and has recently qualified for the Special Olympics National Alpine Skiing finals in Switzerland in February 2020. He will try pretty much anything and often has to work really hard to do what other kids do easily. He loves rollercoasters and was delighted to find out that he’s finally old enough for Alton towers. He is also obsessed with the police and in 90% of photos is wearing police kit!

I think Ryan’s biggest accomplishment to date has been managing mainstream school. We have no special schools where we live, so education is really hard for the kids. His older brother has only managed sporadic school attendance over the years and had withdrawn from the school completely by age 12. School has often been quite difficult for Ryan, but he manages really well. He works at mainstream level in a couple of subjects despite having a moderate learning disability. He also participates in lots of extra curricular stuff like the school choir and the show club.

Ryan has a collection of issues. He has a severely abnormal brain MRI, and there are large sections of his brain that have not developed as they should have. Over the past few years he’s developed an uncontrolled movement in his head and neck area. There is debate over whether this is seizure related or some sort of movement disorder. This is our biggest issue at the moment as it is causing his mobility to deteriorate. Ryan also has significant visual impairment which means that he has relatively good central vision, but has very limited vision outside of this. He also has Balint’s syndrome, a severe form of visual impairment caused by a problem in the brain, which makes him very unsteady.

For us, genetics is like the secret service. We can’t take part in any studies because Ryan is adopted. Various panel tests have been done on Ryan, over the years but I never know what for and everything comes back negative. I hope that eventually DNA sequencing can be used for adopted children. 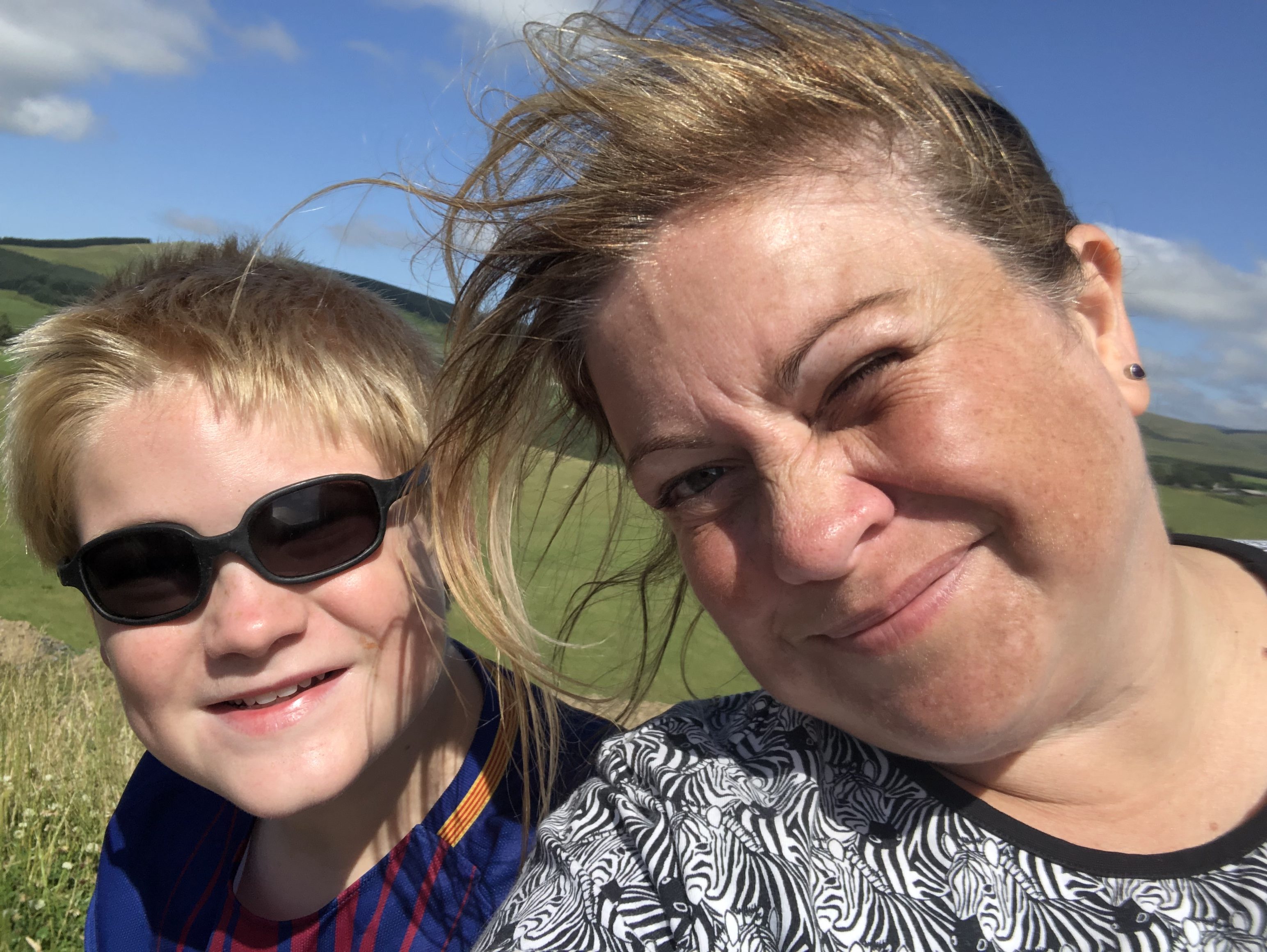 When I adopted Ryan I knew that he had some disabilities, but we didn’t know the extent of his needs. Lots of things hadn’t been picked up on yet, like his brain damage and his visual impairment. When I first saw him I knew things were going to be much more difficult than I first anticipated. Ryan was 19 months old when I met him, and developmentally he was like a giant newborn baby. He couldn’t hold his head up by himself, didn’t track objects with his eyes or look at faces.

For me, the worst part about having a child with an undiagnosed condition is that it is so hard to get anyone to take things seriously.

We’ve been under the neurology department for three years now for his deteriorating mobility, and so far nothing has been done. Having said this,  I feel much more confident since we joined SWAN UK. I honestly felt like we were the only people in this situation. I work with disabled children, but they all had diagnoses and neither of my boys did. Finding out that actually a significant number of children are undiagnosed was a game changer.

If I could change one thing, I would stop whatever is going wrong neurologically that’s causing Ryan to lose the skills we have taken so long to build up! In a way, a diagnosis would make things easier as it would let us know what to expect. I also think it’s good to know if there are any associated health impacts to look out for. It’s particularly challenging to access the support Ryan needs as we live in an under resourced rural area, so getting the right support for him is very challenging and time consuming.

Meeting all the other super families out there has been the best thing about this journey so far! We have so many friends now that we would never have met – it feels like we have really found our tribe.

The online support from the SWAN UK community is amazing. I’ve been on loads of disability groups and SWAN UK is the best by far! There is always someone with the experience or knowledge you need. I’ve also met several friends and colleagues through SWAN UK, which is fab! We’ve been on a few trips and would definitely go on more. SWAN UK is the place I can always go when I get a curveball! Where you can ask advice or just get support and understanding. Knowing that it’s right there in your pocket is comforting.