Hi, my name is Ali and I live with my husband and two children in North Cornwall. My youngest child, Coral, has just turned four years old and up until very recently was my beautiful undiagnosed child. In June 2019 we were told she has Rett syndrome, a neurological genetic condition that affects predominantly girls, and occurs in roughly 1 in 10,000 women. 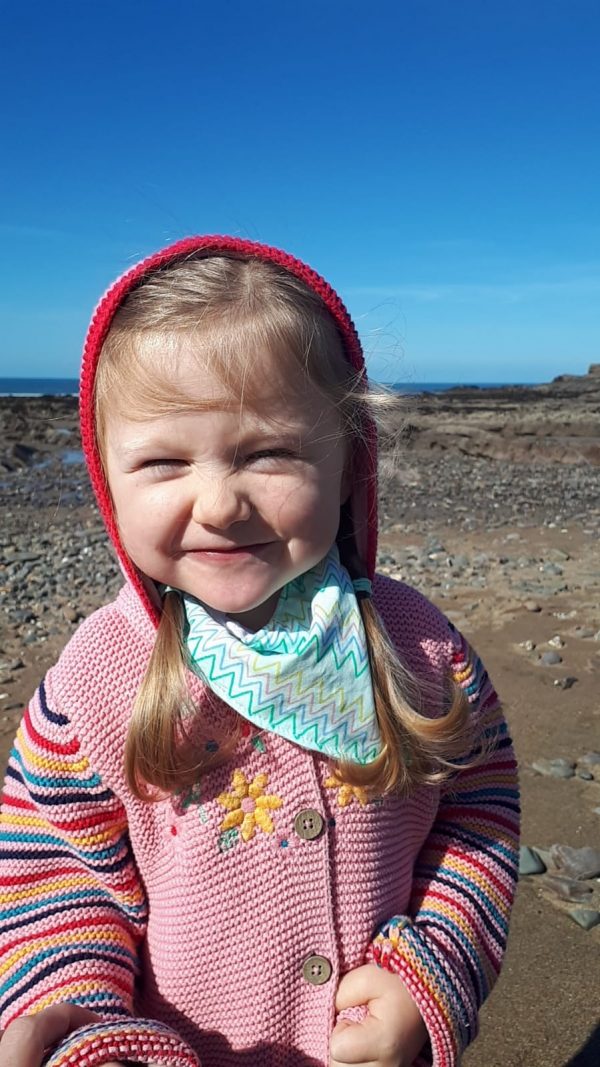 Coral is the happiest little soul you will ever meet. She has an infectious smile and a wicked sense of humour. She is happiest when she is in water, either in the sea, or the bath will do! If neither of those are an option then playing with bubbles and her light up spiky balls come a close second.

We first started seeking help for Coral when she was about 16 months old. Up until the age of about 12 months she had developed ‘normally’, albeit slowly (she didn’t crawl until she was 14 months old), but then we noticed she had stopped doing things she’d been able to do previously and she lost all interest in her toys. We first sought the advice of the health visitor, who referred us to the GP, who referred us to the paediatric consultant at the Royal Cornwall Hospital, initially just to see if there was a problem with her hips that was hindering her from getting up and moving. This escalated to her having an MRI scan, which came back clear, and some other tests, some of which had been carried out when she was a newborn, but he wanted to repeat them to make sure nothing had been missed.

Whilst we were coming to terms with the fact that we’d gone from having a toddler who was a bit slow to do things, to having a toddler who now had appointments coming out of her ears, we were referred for portage, which I can honestly say was the best thing to happen to us in 2016 (other than moving to Cornwall!) We were told about SWAN UK by our portage worker, who was both a font of knowledge and a tower of strength for us in the beginning – and still is now. 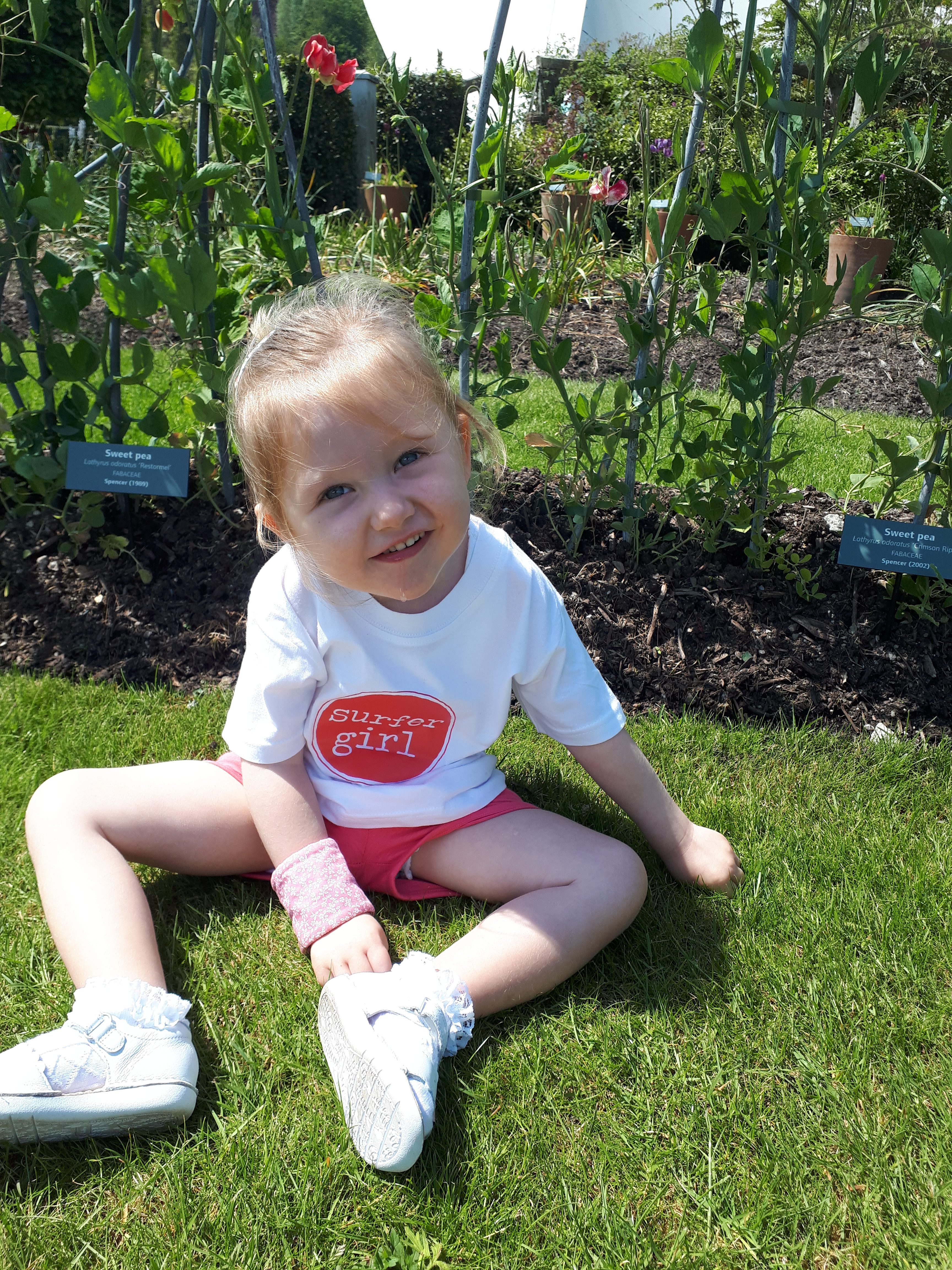 What really helped us, and still helps us even now Coral has a diagnosis, is the network of SWAN UK families on social media. They are an amazing source of emotional support, not to mention providing an absolute wealth of knowledge between them. Together we really are stronger!

If you have a question, need a solution to a problem or are looking for an equipment idea, chances are somebody will have ‘been there and done that’ and found the best answer.

Coral was given an initial ‘working diagnosis’ of Global Development Delay, as she was behind in all areas of learning and development. This extends to having hypermobility, low muscle tone, a poor swallow, poor vestibular sense, problems walking (she learnt to walk at the grand old age of 35 months but still can’t manage steps, slopes, edges, can’t jump, can’t squat etc). She has a rough intellectual age of about 12 months, but some of her skills are behind this age and some are more advanced, for example her understanding of speech is far better than her use of it. She has one word – ‘mama’ – but this gets used in a variety of situations, for example to mean she’s hungry, needs a drink or wants a cuddle. Coral can’t talk but she knows exactly how to get what she wants! She also has problems with sleeping. I think from my point of view this has been one of the worst things to deal with as we are quite fortunate that she hasn’t had too many serious medical problems to deal with yet. At one point she was waking up around 16 times every night and having terrible night terrors, so I was sleeping in 15 to 20 minute bursts for a good couple of years which was worse than having a newborn! Fortunately now her sleep pattern has settled a bit.

Despite seeing paediatric, neurology and genetics consultants (as well as having input from physiotherapists, speech therapists and occupational therapists) all her test results came back negative, so in August 2018 we were entered into the 100,000 Genomes Project. We were quite surprised to get a diagnosis back less than a year later. It was what they call a ‘spontaneous mutation’, meaning it happened randomly. To begin with, we were quite upset. I think whilst it’s only natural to wish for answers, when you don’t have an answer there’s always that glimmer of hope for something positive in the back of your mind. Now I suppose we look at it quite philosophically. It’s something she’s always had, just because we have a name for it now doesn’t change who she is. She’s still our Coral, she still likes to try and yank the washing off the airer as fast as I put it on! 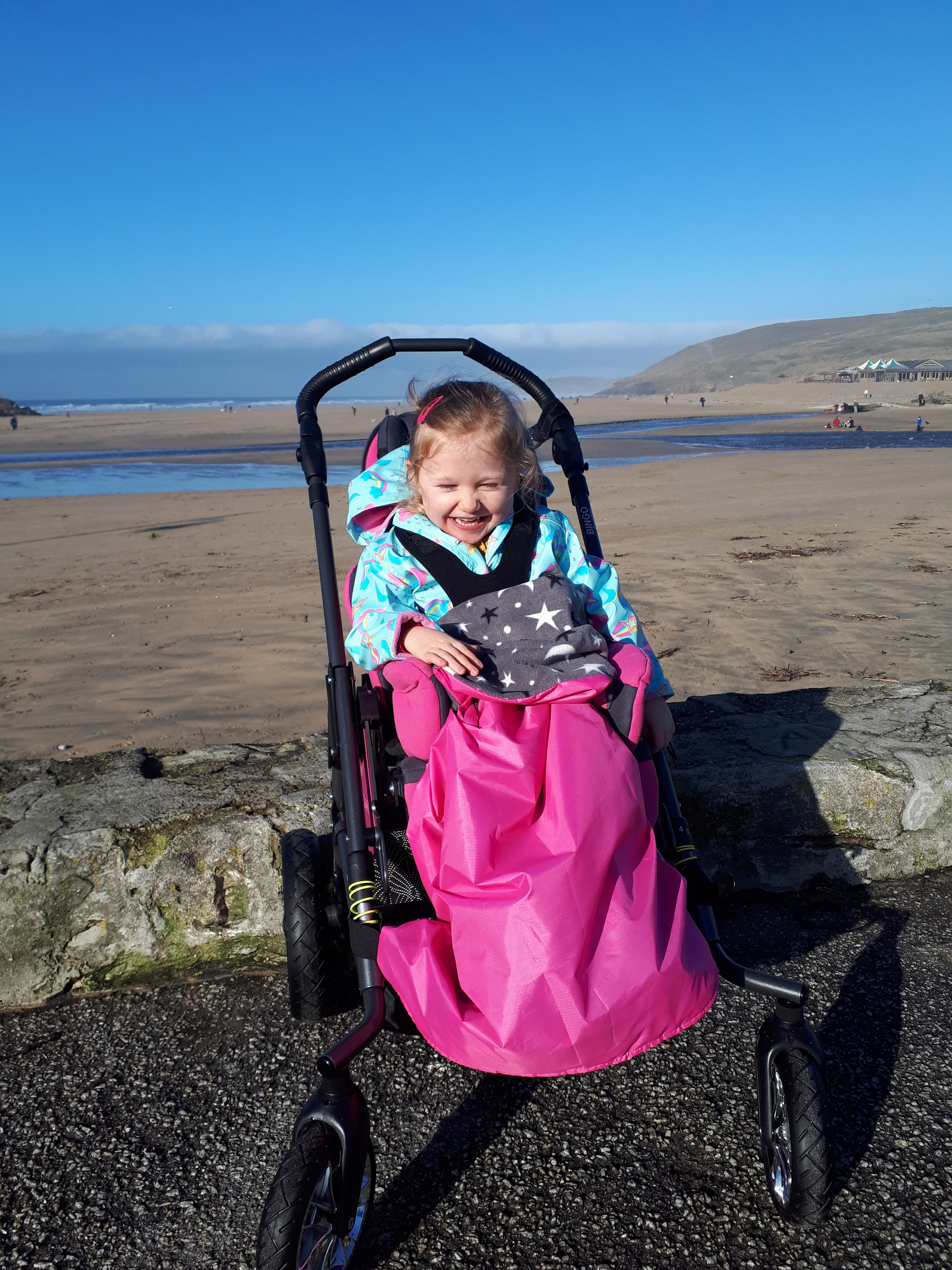 Being undiagnosed does make some things more tricky; you have to push harder for help, you have to develop answers to the inevitable questions ‘what’s wrong with her?’ ‘Why don’t they know what she’s got?’ I don’t think you realise until you’re suddenly thrown into that world just how many people are dealing with an undiagnosed condition on an everyday basis. We just assume that because doctors are doctors, they know about all the conditions that exist.

We’re just not exposed to the idea that a condition can be undiagnosed, which is why SWAN UK is so important. Advocacy is the way forward, knowledge is power!

And to any parents or carers of a child with an undiagnosed condition starting out on this journey, just remember you are not alone. We have your back. Always.