I’m Chris, and my wife Cassandra and I are proud parents to Alexandra, our swan, who is turning four in March this year. We’ve been members of SWAN UK since September 2018 – we joined after going to an information evening for parents of children with undiagnosed conditions in Great Ormond Street Hospital. We live in Knockholt, Kent.

Alexandra is a very smiley and giggly girl, and loves being cuddled, tickled, and thrown in the air. She loves other children too, particularly chasing after older kids! However, she does get frightened easily, particularly if she is startled or slips over suddenly.

To date, her biggest accomplishment has been being able to stand upright at tables and surf around the furniture when playing with toys. She is also able to crawl up stairs by herself now, and has been making great progress using her walker. 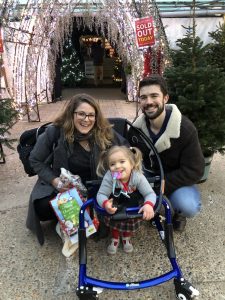 Alexandra’s biggest issues are her physical and cognitive developmental delay. Although she is three, she is the size of most one year olds, and still unable to walk by herself. She can understand some words, but cannot communicate verbally. She understands more than she can show, which sometimes leads to her becoming very frustrated at not being able to tell us what she wants.

The inability to communicate effectively with her is the most difficult thing for both her and us as parents – sometimes we feel we can’t give her what she needs.

We realised within the first few weeks that Alexandra was struggling as she wasn’t gaining weight well, and by the time she was six weeks old we realised her physical development was slower than normal. There wasn’t one specific moment when we realised something was wrong, it was more of a gradual process over time. She slowly fell further behind and dropped off the growth charts. She’s had a lot of medical investigations into her growth and other things as well – lots of scans and tests. Often the tests would pick something up that turned out to be a red herring. It’s been good in a way that we know she’s been looked at so closely, but can be very difficult when every answer raises a new question. Ultimately, there’s not a lot the doctors can tell us that we don’t already know.

Over time we started to notice some unusual behaviours that suggested autistic traits, such as flapping, repeatedly banging, spinning toys for long periods of time, and her struggles with communication. However, her clinicians are hesitant to give her this label yet as her social development is in line with her physical and mental development.

The whole process of realising her issues has been very drawn out. In some ways this has softened the blow a bit and given us time to process each part, but in others it can feel like it never ends.

Alexandra is part of the 100,000 Genomes Project, but we might have to wait some time for her results. Our main hope in taking part is that the project will identify a genetic cause for her condition, and tell us the likelihood of the condition recurring if we have another child. We would really like to have a second child, but knowing this first would allow us to explore all our options – we feel that having a second child with Alexandra’s difficulties wouldn’t be fair on either of them. But at the same time, we know she would love a sibling! Hopefully if there is a genetic cause, it is just a rare, one-off mutation. However, if it is an unlucky combination of both of our genes, then the odds of it happening again are one in four, and we would  want to look into screening for this.

We would love to be able to find other families with the same genetic condition – the dream scenario is finding out her condition is a ‘known thing’ so someone can tell us what we can expect for her future. However, we have come to accept this is an unlikely possibility. This is probably the hardest thing for me to face as a parent – not knowing what things will be like for us all as she grows up. It also makes it very hard to plan for the future: if we knew what she would be like at 10, 20 and 30 years old we would know what we should be putting in place now to prepare.

Not being able to picture the future is one of the toughest parts of this whole journey for me.

And as morbid as it sounds, we don’t know what we should do now to prepare her for when we’re not here. We don’t often talk about this with people, but one of my biggest fears is what happens to her after we are gone – she’ll almost certainly need some form of lifelong care, but knowing what to put in place now to set that up is so difficult when we don’t know what she’ll be like then.

For the three of us as a family, Alexandra’s condition has obviously created a lot of stress and worry. Sleep is a big issue for us – some nights she sleeps well but other nights she won’t fall asleep until the early hours, or she’ll wake during the night. She rarely cries, but will giggle, clap and bang her cot. As awful as it sounds, this is often harder to deal with than crying – at least if she’s upset we can go in and comfort her. But if she’s happy, there’s nothing we can do! We both struggle to get enough sleep as it is, so this adds another layer of stress (I’m currently typing this at 4am, listening to her clapping on the monitor)!

It’s also put a lot of strain on our marriage – fortunately we are in a better place at the moment, but we’ve sought out couples counselling in the last few years when things have been particularly difficult. There’s not one specific thing that causes us to snap or argue, just the steady build up of lots of little things. I’m really grateful for the counselling as I feel it’s given us both better communication tools and ways to support each other and Alexandra.

I think as a swan dad there are some particular challenges I’ve faced.

There’s a lot of pressure on men to ‘man up’ and ‘tough it out’, which has lead to me trying to keep things inside and not talk about how difficult I sometimes find things. I have a tendency to pretend I’m fine and don’t want to ‘burden’ others by talking about my problems – even Cass. The problem with this is that I end up bottling things up and storing up my resentment and anger, which then comes out in unexpected ways. I also find that I deny to myself that I’m struggling which means I’ve been resistant to asking for help from others.

All of these things have also caused me to downplay Alexandra’s condition at times – to other people but also to myself. I can remember when we were shown around the special needs school where she attends nursery and saw all the other older kids, some with severe disabilities. I was thinking to myself ‘well, obviously she’s not as bad as the other kids here, but at least she’s got all the help she could need.’ In hindsight, I think I was subconsciously resistant to engaging with the school, as I didn’t want to admit we were like the other families there. It’s taken me quite some time to come to terms with the fact that she is like these other children, and might need just as much help for her whole life.

A few months ago I actually started to go to therapy for myself.

Like most men, I was initially quite resistant to the idea – ‘I don’t need that, I’m not that bad’. A lot of my pride comes from the idea that I’m independent and self-sufficient – part of me feels this is what it means to be a father, to ‘be a man’. However, I’ve come to realise the harm this can cause, both to Cass and Alexandra, but also to myself. It prevents me from emotionally connecting with them, and causes me to bottle things up instead.

But the therapy has been really helpful for me. I have a better understanding of myself, and why I react in certain ways sometimes. It doesn’t mean I don’t get angry or upset, but I can manage it better and am less likely to take it out on others or slip back into denial. In hindsight, I wish I’d started years ago!

Having said that, I still find it difficult to talk about how Alexandra’s difficulties affect me emotionally with most of my friends and family.

Even if I know that sharing how I feel is healthy, inevitably other people don’t always agree or want to hear it. It makes some people uncomfortable just to hear that things are difficult sometimes – and mentioning therapy causes some of them to go quiet or change the subject. I feel it’s still a bit taboo for men to talk about things like this, in a way that it isn’t for women. And even when they do want to listen, ultimately I know they just don’t get it – they haven’t been through this themselves so can’t fully understand what it’s like.

This is where SWAN UK has been especially helpful for me, in particular the SWAN UK Dads’ Facebook group. It’s been invaluable to find a community of dads going through exactly the same stuff as me, who understand and support each other when we’re finding it tough, or just need to vent. I’m really looking forward to the Dads’ meetup that SWAN UK have organised in March, and getting to meet some of them in person.

To me, SWAN UK means that I’m not alone.

It helps me personally feel less disconnected, but also gives both Cass and I hope for finding our way through this journey. I remember thinking after the information evening we went to in September, ‘wow, that’s the first time I’ve been in a room full of people who know more about this stuff than we do!’ As great as our doctors are, we know they’re just as much in the dark about Alexandra as we are at times. Being able to talk to parents who have been on this journey for a decade longer than us was amazing – although all our kids are different, we all share the fact that they don’t have a diagnosis. We’re all in the same boat, and we’re not alone. 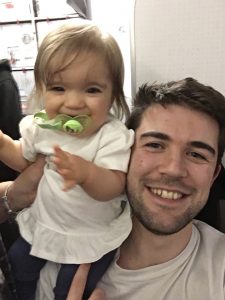 We’re both really glad we found SWAN UK – even though it’s only been a few months since we joined it feels like much longer! Just knowing there are other parents who understand what it’s like and have each other’s backs has been a huge reassurance. I’d especially encourage any swan dads out there to connect and join – it’s not easy to ask for help, but we can’t do all of this alone.

Our ideas of what it means to be a man, and masculinity in general, are in a large part about being ‘strong’ – strong men, strong fathers, strong husbands. And although these days some people feel that’s an outdated idea, I personally feel it’s a good thing for us to aspire to.

But being strong doesn’t mean toughing it out and doing it all yourself. It means accepting when you’re struggling and reaching out. It means putting your family’s needs first, even when it goes against what society has told you is ‘manly’. That’s real strength, and that’s the kind of dad I want to be. And that’s why I’m so glad we have found SWAN UK – there’s strength in numbers.