Hello, my name is Georgia, I am 22 years old and undiagnosed. In our family there is also mum, mum’s fiancée Gary, my older sister Kimberley and my older brother Russell. There are also a lot of nieces and nephews and several pets. In many ways I am similar to most other young adults. I enjoy being involved in Girlguiding, crocheting, baking and horse riding with the Riding for Disabled Association.

However, there are some things which are a little bit different. Not long after I was born the doctors realised that there were lots of small things which were not quite the same as in other babies. I didn’t feed properly, had several infections and I also didn’t seem to be growing. Mum realised that things were going to be different from when I was around three months old. At that point the doctors told her that they thought there was some kind of syndrome but they didn’t know what it was and the tests they were doing were just giving them more questions. I was classed as medically complex and different symptoms started to show at different times.

I didn’t realise myself that life was different until the age of about nine. Until then I just thought that everyone had to go for regular hospital appointments and have their bloods taken every couple of weeks. 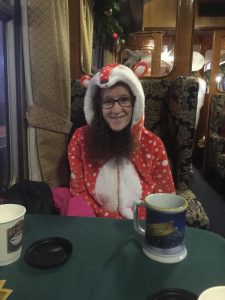 Part of the message for Undiagnosed Children’s Day this year is about how many of the swan families are like lions and show courage on a daily basis.

My family are quite similar to lions because we are always there for each other.

We try and do the things that other families can do even if that means doing some things a slightly different way. For example, I can do horse riding but on a special horse who has been trained to respond to voice commands when my legs are too tired (I have very hypermobile joints which often leads to my muscles getting quite floppy).  As a family we have had to learn to adapt to the fact that I can end up having to be admitted to hospital at short notice. When we go on days out we make sure we know where the nearest hospital is and I wear a bracelet containing the basics of what people need to know.

When I was around 15 years old, we found SWAN UK.

To me SWAN UK is like an extended family who completely understand what it is like to be undiagnosed.

One of the biggest challenges of being a young adult and undiagnosed is that it can be difficult to explain to peers who have never experienced anything similar. About a year after we joined SWAN UK we got the chance to go to a family day out with them and meet others living with undiagnosed conditions. Although all swans and swan families are different, everyone understands each other. At the family day we talked about loads of different things, but one of the best bits was making friends with people without having to explain to them that I have an undiagnosed condition because that is accepted as the norm.

In some ways having a diagnosis would make things much easier because it would mean I could just tell people I have ‘x syndrome’ rather than having to explain my entire medical history. It would also make it easier if I ever decided I wanted my own children one day because we would know the chances of them being affected as well. However, a diagnosis would be unlikely to change my medical treatment, it is also likely that whatever diagnosis I got would be incredibly rare (the majority of non-rare syndromes have been ruled out). I also know that if we did get a diagnosis I would still want to keep in touch with my SWAN UK family.