I’m Kayley, I’m 25 and live in Wigan with my three children. Erica is five years old, she loves swimming, rugby, My Little Pony and anything with glitter on. Ellery is two and he has just started to talk –e loves Thomas The Tank Engine. Evana is very nearly four. I registered Evana with SWAN UK when she was 23 months old and her paediatrician had diagnosed her with Global Developmental Delay. We now know that Evana has a diagnosis of 15q11.2 microdeletion of unknown clinical significance. Evana loves Peppa Pig, Waffle the Wonder Dog, Teletubbies and Premier Inn hotels (we often sit watching videos on Youtube and she calls it Night Time Moon.)

Evana is the happiest, cheekiest little girl. I’ve never met anyone that hasn’t fallen in love with her cheeky personality almost instantly.

When Evana was born, she was a very sleepy baby. As she got older, around eight weeks, we noticed that she hadn’t started to smile or to hold her own head up. We didn’t think anything of it at the time, especially as we were told to stop comparing her to Erica and that she would catch up eventually. But then we noticed that Evana was delayed with all of her milestones. She didn’t sit, crawl or roll until much later than expected (in fact she still struggles to roll now) but we were told by health visitors to wait as she would catch up. At 17 months, Evana was still not weight-bearing so I decided to take her to the GP who referred her straight to a paediatrician. Evana’s paediatrician sent her for x-rays and blood tests, all of which came back fine so he decided to send her for a microarray test.

When Evana was 25 months, we discovered that she had 15q11.2 microdeletion. We were referred to geneticists at St Mary’s Hospital in Manchester, who told us that there is little research on Evana’s genetic condition so we would have to see how she goes as she gets older. Evana’s fine and gross motor skills are affected, as well as her speech. She also suffers from nosebleeds and has sensory issues. Her paediatrician believes that she may be autistic and Evana has been referred back to SALT (Speech and Language Therapy) to begin assessment. Evana is hypermobile and is also still in nappies.

Evana is extremely brave. Every night, she wakes multiple times in pain, mostly in her legs. Evana doesn’t let this stop her and still manages to do things such as walking and kicking a ball, even if it takes her longer than other children to do!

She doesn’t like to be helped and she will try and try until she completes something, even if it makes her very frustrated. Most recently, Evana has started a new nursery and was able to tell us the name of one of her friends, something which we weren’t sure would ever happen! She also managed to put her socks on for the first time last week! Evana is now able to tell us her feelings and problems more than she used to which does help a lot. 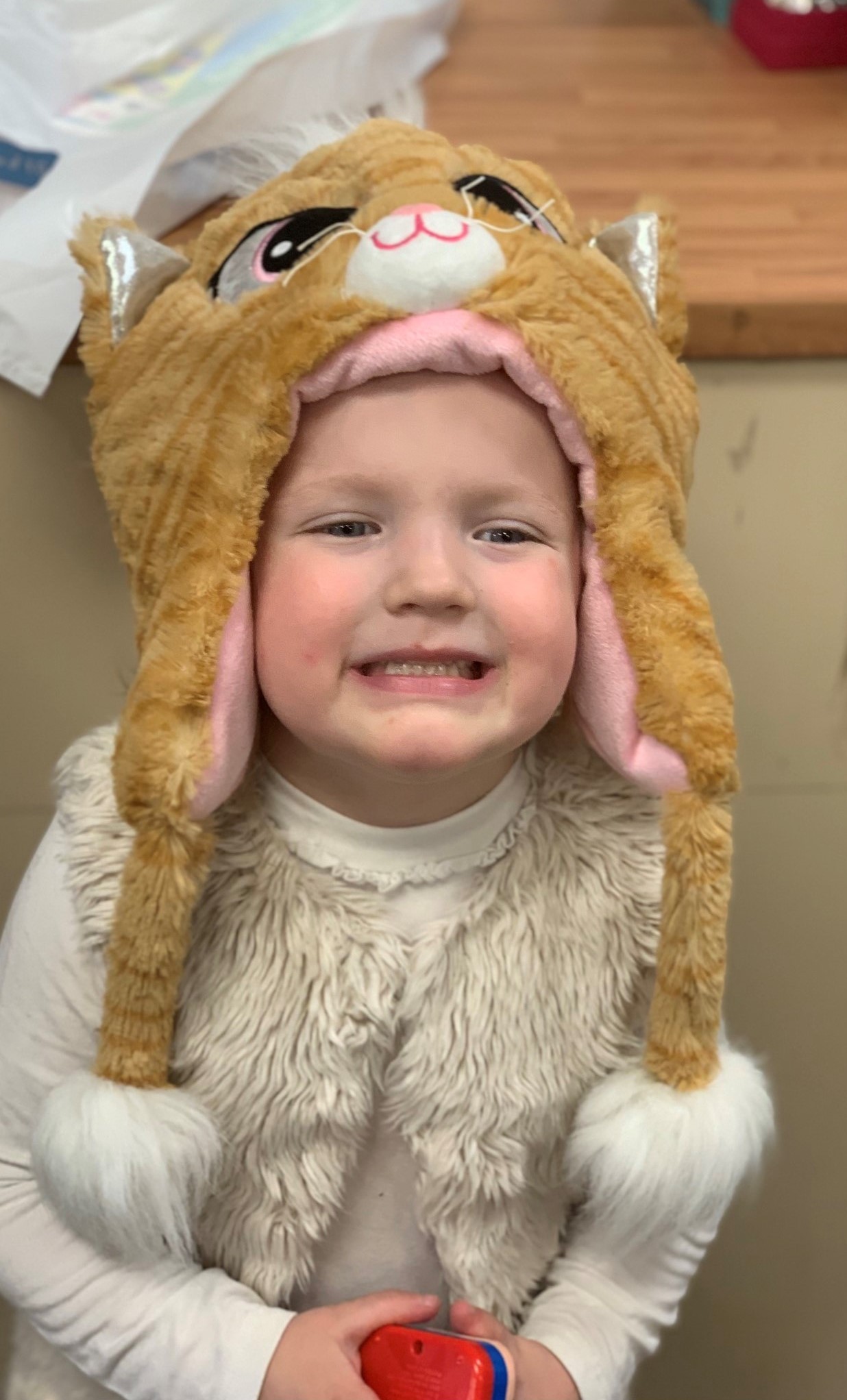 Erica is the best big sister to Evana. Often when Evana gets upset or frustrated, Erica will get her a blanket, ear defenders and give her a cuddle until she feels better. Erica has had to sacrifice a lot and has been told ‘sorry, we can’t do that because Evana wouldn’t like it’, but Erica never complains. In fact, Erica has now learnt what we can do to help Evana and often asks if we can do activities that she knows Evana will like too. Erica tries to help Evana with lots of different things. Just a few days ago, I found Erica trying to show Evana how to build lego. She also loves reading to her! Ellery is a little bit too young to realise that his sister has special needs but he loves playing with Evana, although he is catching up to her in some milestones.

Evana has a lot of doctors appointments. As well as her genetic condition, she suffers from a lot of ear infections. Sometimes it feels as though we live in the doctors surgery!

She has blood tests quite often and at one point was having two specialist appointments a week. Unfortunately, we were recently told that Evana will have to learn to live with her pain as there is not a lot that can be done. We have tried special shoes as well as insoles to try and correct her feet (they are flat and turn in), which unfortunately did not work. Evana also has a lazy eye which requires three monthly orthoptic appointments.

As a family, we face a lot of stereotypes.

Evana uses a Special Tomato EIO (pushchair), which was given to us by charity as the NHS would not provide one. One of the biggest problems is public transport as it is not always recognised as a mobility aid and we are often asked ‘can you fold it?’ We get a lot of looks and stares in the street which can be quite upsetting. Erica has started picking up on them and often tells people not to stare at Evana as she can’t help being upset. It can be quite a lot of weight to carry on little shoulders! Also, as the condition is so rare it is very hard to know what to expect as Evana gets older as there isn’t enough information, which can be quite scary!

If I have a headache, I can search on Google for tips on what to do. There isn’t a search option for ‘my child is in severe pain because of her rare condition’, what can I do?’

SWAN UK was the first source of information I found when Evana was referred to the pediatrician. It helped to see other families in similar boats and to be able to ask for advice, even if we couldn’t fully relate. I can post on one of the SWAN UK groups if I have a question which helps a lot. When Evana was younger we would be quite nervous to take her on days out because we would get a lot of ‘she’s too big to be in a buggy’ comments, but we went to Chester Zoo for the day with SWAN UK and that definitely helped us to build confidence to go on other days out. Now we’re so used to the negative comments that we just brush them off! It has also helped us to share our story. I first shared it with SWAN UK when Evana was two – now I love telling our family’s story!

Unfortunately, we have no idea what the future holds as Evana’s development is still delayed by around two years. In September she starts reception so this is a very scary time for us, trying to make sure the school is right for Evana and they understand her needs. Unfortunately, we had a very bad experience with this in her old nursery where they didn’t understand Evana’s needs at all, but I know that I can always turn to the SWAN UK groups if I need any questions answering or any help!