I am Jemma and I have three sons, Jack aged 13, Hugo aged five and Atticus who is three. We also have a Cockapoo called Harry.

Atticus has had testing for overgrowth syndromes – Fragile X Syndrome and Sotos syndrome last year, and they came back as normal. He went onto the 100,000 Genomes Project at the beginning of the year and we both had our bloods taken in February at Guy’s Hospital, where his geneticist is based. We were referred to her last August as Atticus’ respiratory consultant at the Evelina London Children’s Hospital, felt that the global delays he had, as well as the complex developmental and medical health needs, were a result of a genetic condition.

Atticus is a loving and kind little boy. He has unconditional love for his brothers, although sometimes (actually quite often) he will let them know in his own way if they have upset him, such as when he doesn’t get his own way. He watches dinosaur programmes such as Andy’s Dinosaur Adventures on repeat and loves Jurassic World too. We recently went on a family trip to the cinema to see Jurassic World: The Fallen Kingdom and he got very excited when he saw the dinosaurs and screamed ‘shaws’ at the top of his voice. We were lucky to have very sympathetic cinema goers sitting near to us. He has some lovely dinosaur books with some dinosaurs with very complicated names in them. 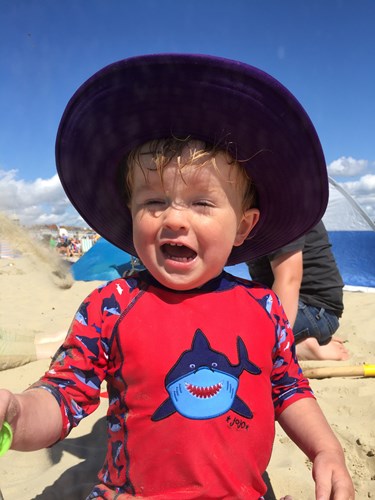 Even though he doesn’t speak, if I say the wrong name for a dinosaur, he will tell me I am wrong by shouting at me!

Every day is a challenge for Atticus – strategies which work one day, tend not to work the next, so there are lots of moving goalposts for him in his life. Atticus feels very accomplished and happy if he is asking or telling me or his brothers something and we understand. He uses basic Makaton and can say words like biscuit, more, thank you, fish, pig and dinosaur! He has limited friends due to his lack of speech, and he struggles when we go to new places. We don’t go swimming with him very often; even though he loves it and has no fear of swimming pools, as he always gets a chesty cough and a cold after we have been and his eczema flares up making it very difficult to control once more.

Atticus has been under the care of three London hospitals since he was four weeks old. He was admitted countless times for respiratory infections as well as having surgery at the age of 11 months for acute laryngomalacia. He also has tracheomalacia.

He’s now been diagnosed with acute gastric oesophageal reflux disease, eczema asthma and macrocephaly. He has hypermobility of his hips. Intensive physiotherapy when he was a year old meant he was able to sit for the first time. He started rolling over at the age of 14 months and walking a few months later.

He sees an ear, nose and throat (ENT), respiratory, allergy, genetics and neurology teams in London as well as a speech and language therapist team which deal with his swallowing and breathing issues. He also sees them for his speech issues which have been diagnosed as ‘severe expressive communication delays’ which impact on his behaviour as he gets frustrated not being able to tell me what he wants or how he feels. He has global developmental delay and there are worries that his speech problems will have a huge impact on the rest of his learning if support is not put in place. They will all feed back to a multi agency meeting in the coming months to see what else can be offered in the way of help for him.

Due to his breathing issues and lack of stamina with walking he has a blue badge which has helped greatly. Atticus is also presenting very challenging behaviours which are becoming more apparent as he gets older. He was put on the Autism Spectrum Disorder waiting list for full autistic assessment in April.

We have many trips to see Atticus’ consultants in London each month, meaning I can only work part time, and days out and trips we plan as a family have to be planned at short notice due to Atticus’ health issues and behaviour. Some days life is just ‘too much’ for him. He cannot cope and as a family we feel hopeless. It’s been a very lonely and long journey, trying to find the answers and address them. I know I have to accept that at best, I can only manage his health and his well being and not make him better.

When we met with Atticus’ ENT consultant six months after his surgery I had no idea what was in store for us. I was so impressed by Atticus’ sudden energy – he seemed to be catching up with his peers in most physical areas. However, the ENT consultant said his breathing was only slightly better and referred us to a respiratory consultant to see if he had a reactive airways disorder. He was then diagnosed with asthma and eczema. From 18 months onwards I knew that his life path was going to be a different one to his brothers and that it would be a battle for him to achieve what others take for granted.

His health has had a massive impact on the family especially that of his two older brothers who are now registered as young carers. Every day is a challenge; every day each strategy you used the day before has to be changed. The visits to London are relentless – t he tests, the stays, the appointments. I spend hours every night researching ways in which I can help Atticus. I am taking part in the Early – Positive Approaches to Support  project (E-PAtS) with the University of Kent and Barnet Mencap at the moment because of the desperation I have for wanting to help my gorgeous little boy. As we do not have a diagnosis yet, it is very difficult to explain why Atticus is unwell, why he cannot talk and why he behaves in a way so very different to other children his age.

We are acutely aware that as he gets older, things will become more difficult for Atticus. His neurology team have suggested that we have a strategic meeting to discuss the way forward in managing my beautiful little boy. His paediatrician believes that if he has a diagnosis through the ASD pathways team, it will add more clout to his Education Health and Care Plan, which he has and he will be afforded more support at school when he starts. It has been suggested to me that we delay his entry to school from next September to September 2020. I just want to know the best way to help my son and how to move forward with him.

I do believe that once we have a diagnosis I can seek support in the best way possible and it will be easier to tell people what is affecting Atticus, rather than explaining all his symptoms. It is amazing how many judgemental individuals cross our path and just don’t understand how tremendously difficult life is for my little swan.

I think once we have a diagnosis things will be clearer about the future and what it holds for my fighter.

I’ve met some wonderful consultants, doctors and professionals who are all trying to help my son and help me come to terms with what lies ahead for Atticus. I have met some incredible people whose are experiencing the same as Atticus and I draw immense strength from them. Through this process I have found a patience and understanding and we celebrate the smallest of steps of achievement at every opportunity.

I stumbled across SWAN UK on Facebook and I am glad I did. Everyone is kind and helpful and they get it. They get the exhaustion and the battles and the lack of hope at times. They have been my lifeline. SWAN UK has given me reassurance that I’m not going mad and that there are other children on this path. I gain strength from other people and feel I can also offer support to families who are at the beginning of the journey which Atticus is on. It’s a wonderful community and makes me feel that I am making the right decisions for my son and my family.

SWAN UK makes me feel like I am not alone, that I am not imagining this journey and that people have walked in my shoes and they understand how I feel. It’s a magical place to be and I am so thankful that we are part of this amazing support network.

Read more about Atticus at: iatticus.com