In the 19th Century, German protestant Christians counted down to Christmas by marking 24 chalk lines on a door and rubbing one off every day in December. Two hundred years on and advent calendars have become an industry all of their own.

If you’re a parent of an eight year old girl, you may have fought and lost the same battle I did over this year’s must have £25 Smiggle advent calendar. It’s not chocolate this generation of children crave at advent, but artificially scented stationery.

And if you’re a partner to a 30 or 40 something man, you may have fought and lost the same battle I did over an enormous portion of the kitchen being given over to a Beer Hawk advent calendar. Basically 24 bottles of beer in a box, dressed up to look like an advent calendar.

For Orange, neither beer nor whiffy stationery is on his wishlist, and chocolate is a no go zone. But he’s six. And he needs an exciting countdown to Christmas!

So this year we have revived our idea to create him a sensory advent calendar. Throughout the month of December, Orange will have a different Christmassy sensory experience each day – a taste, a smell, a sound, a feeling – to get him into the Christmas spirit.

Last time we did a sensory advent calendar, I was super organised and planned what we were going to do each day, making a box of sensory delights including cinnamon scented play dough and peppermint scented rice bags.

This year, I’m well behind the curve. Something to do with juggling my job, re-inventing my freelance career and managing the mountain of school-led Christmas to-dos.

Luckily, my much more organised friend, who writes at The Inclusive Home, has created a #sensoryadvent countdown for us to join in with. 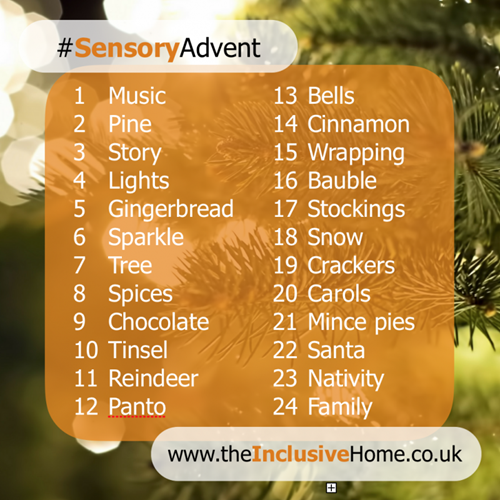 Day one of #sensoryadvent is music. One of Orange’s favourite things. We started off the fun with a musical plush Santa soft toy.

The music hit the mark, but Santa?

Well, let’s just say I hope the cats like him more than Orange did. Or his Christmas could be pretty lonely!