SOMETIMES I JUST DON’T KNOW WHO TO CALL …

To the many professionals involved in my son’s care,

As you know, Benjamin, in common with most other children with rare, genetic or undiagnosed diseases, has a complex array of physical, medical, mental, behavioural and social problems, arising from an unknown, underlying cause.

These issues are clearly co-occurring and interrelated, but determining how they are related is easier said than done, particularly in a non-verbal child who cannot explain what came first. It’s often a multiple chicken, multiple egg situation.

For instance, this week I sat up with him through the night as his muscles tensed, his respiratory rate quickened, his heart-rate raced, his breathing rattled and his temperature fluctuated. Trying to work out whether this is the result of a new medication he is on, a respiratory infection, the old medications not working well enough to control his muscle tone, some new kind of seizure … Was he in pain somewhere, causing his muscle tone to increase which in turn affected his breathing? Was he brewing a chest infection? Was the new drug causing his temperature to fluctuate?

Should I do some chest physio, give him calpol, or call 999? (In the end, as usual, we never found the answer; but a course of antibiotics, a trip to A&E, a good night’s sleep and a lot of cuddles later he seems to be getting back to himself).

Following this, when I clearly had too much time on my hands (or rather, was too tired to get on with anything useful), I tried to get down on paper most of the manifestations of Benjamin’s condition (so far). 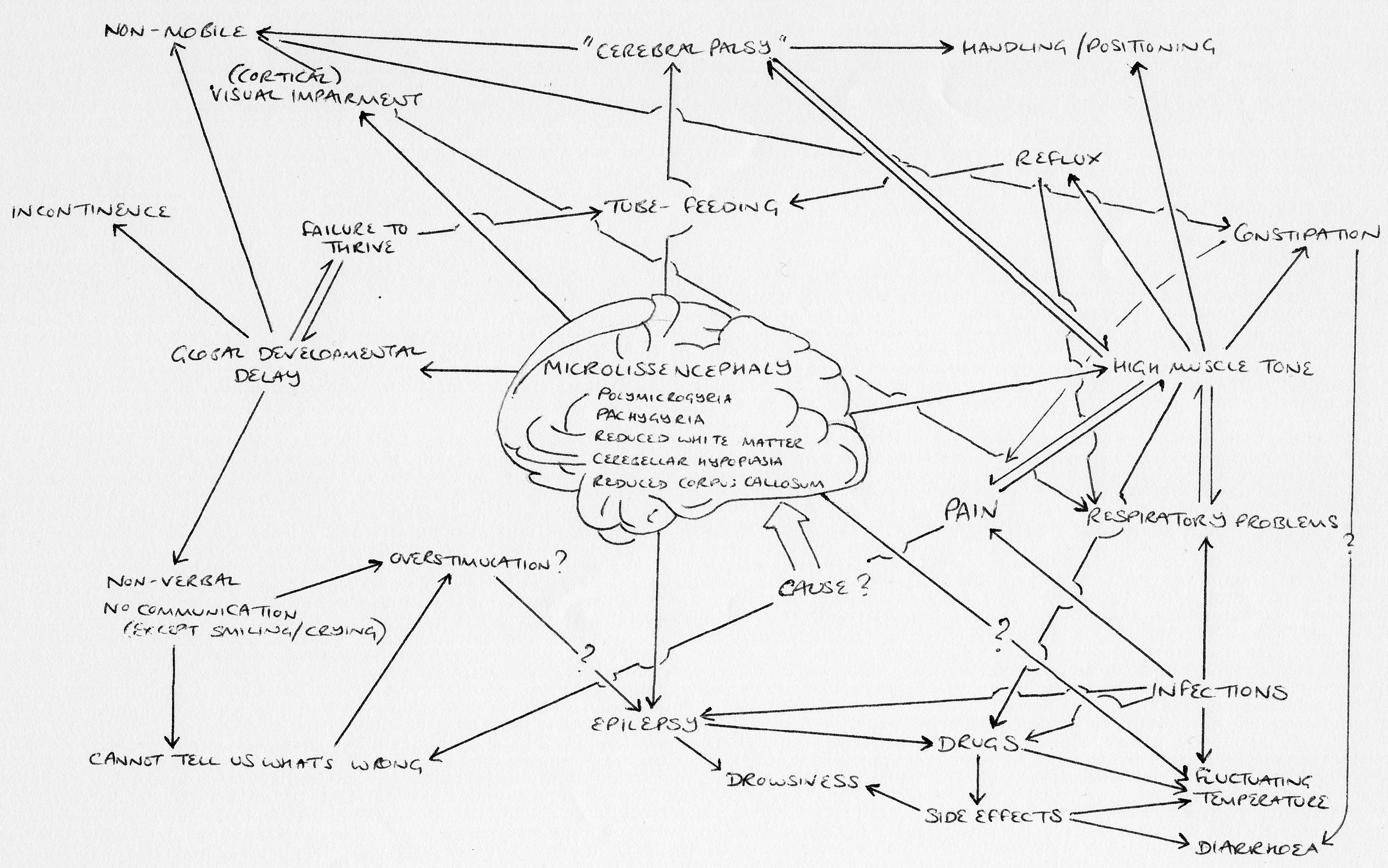 As you also know, alongside each of these symptoms comes a professional, a service, an assessment or a provision. You guys. I’ve added you to my map in green (and some necessary evils in red). And sometimes, with so many of you, I just don’t know which one of you to call. 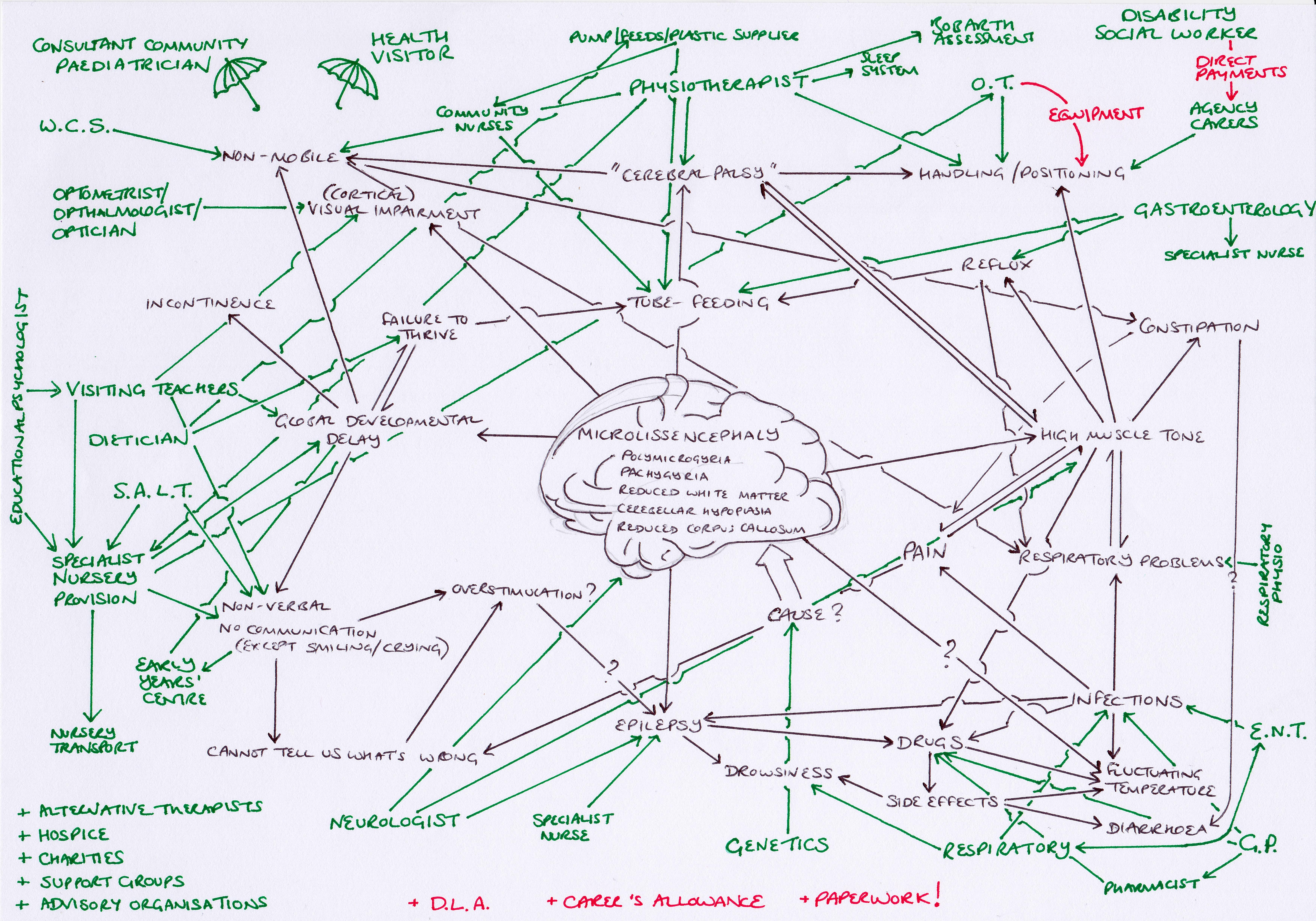 Benjamin is probably not the most complex undiagnosed child you may deal with, but he is complex enough! And his needs will only grow in extent and complexity as he gets older: continence nurses, school, CAHMS, IEP, DLA mobility component, Motability, adaptations, hoists, lifts, PIP, transition to adult services … or end-of-life care …

We are incredibly fortunate and so very grateful to have so many people and organisations involved in making sure that Benjamin gets what he needs to lead as happy, healthy, long and fulfilling a life as he can. We are definitely the lucky ones. Moreover, we have experienced fantastic coordination of Benjamin’s care. However, that’s something which, sadly, cannot be said for many disabled people and undiagnosed children in particular.

Coordinated care is something that SWAN UK, the support network for families of undiagnosed children, is highlighting this year in the run-up to Undiagnosed Children’s Day on 29 April 2016 (mark it in your diary now)! So, to complement some of the other blogs you may read over the next month highlighting the deficiencies in, and the critical need to improve, coordinated care, I’d like to thank you for the ways in which Benjamin’s care has been coordinated: an example of good (if not best) practice, which perhaps some local authorities could learn from.

We have a small number of overarching professionals (I’ve marked you on my diagram with an umbrella) who have a good understanding of Benjamin’s condition as a whole. If Benjamin has a problem, or if I have a question, I know these people will do their best to find an answer. If they can’t come up with an answer, they also have the confidence to admit it, and the knowledge to refer us to someone more specialist who might. When I don’t know who to call, I call them. I count our community paediatrician and health visitor as our key contacts, and the latter is our named ‘lead professional.’ I’m pretty sure she wouldn’t need that title to provide us with the help that she does but perhaps, for other children, designating the right person as ‘lead professional’ would be a key step to providing more coordinated care.

You all talk to one another. Shock, horror! I don’t mean everyone, all the time: the school bus driver is not in regular discussion with our optometrist; but there is at least some degree of linkage between most of the people in our tangled web of support. Our more regular contacts do their best to attend Benjamin’s Multidisciplinary (medical) and Staged Assessment (educational) meetings, and if they can’t, they send a report or follow-up with me separately. I’ve heard other parents say that they were the only ones to turn up to a staged assessment meeting that should have included at least half-a-dozen professionals. I know these are busy people, but surely they could have sent in an apology to some central organiser, so that someone could twig that attendance would be low and reschedule the meeting for a time more convenient time for everyone?

You are contactable and you actually call us back. I do sometimes bemoan the fact that NHS staff never give out email addresses, when it would be so useful and so much easier than trying to phone to reschedule an appointment with a baby screaming, a 13 kg toddler with no head control on my hip, and a pre-schooler decorating the sofa with felt-tipped pen. And yes, we do sometimes receive an appointment letter 48 hours after the appointment was supposed to take place. But generally, your communication is great. I know if I need to speak to someone, I can. Whether it’s to ask the neurologist to tweak Benjamin’s medication, discuss his feed requirements with the dietician, or talk to his nursery teachers about how he got on in class today, I reliably get put straight through or hear back within 24 hours. Many of our community team – the nurses, respiratory physios and the like – will come out to our house, 30 miles from their base, the same day.

Finally, and at the heart of coordination, Benjamin’s care is patient-centred. Most of the people we see know Benjamin well and treat him as a whole. You don’t limit yourselves to the isolated presenting symptom that lies within your specialty. Our physio wants to know how his sleep has been, our neurologist makes sure he is up-to-date with any feeding issues, our educational psychologist wants to know what the visiting teachers are doing at home as well as what he is being taught at nursery … With a complex child like Benjamin, this sort of approach is crucial, because more often than not the issue under scrutiny is a manifestation, a sign, a cause or an effect of a problem in a completely different part of Benjamin’s makeup. 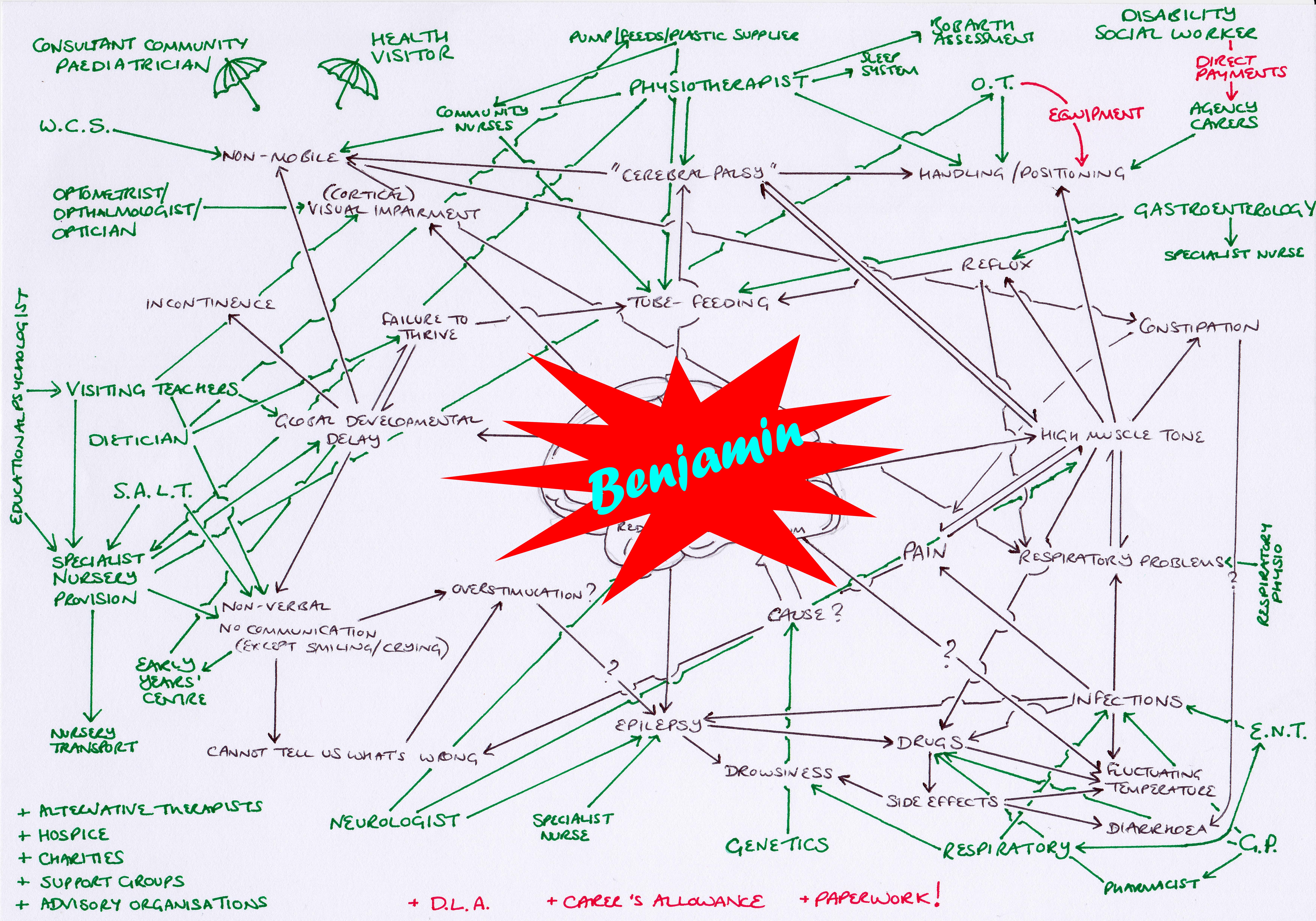 I don’t know why the system has worked well for us. Perhaps we are lucky to live in a small local authority, with a small number of special needs children, which facilitates a more personal relationship with professionals than elsewhere. I know many families are not so lucky. Time and resources are limited; departments and individuals are stretched. Poor administration, management and support can lead to frequent miscommunication. All this needs to change.

As parents and carers we also need to take responsibility for encouraging more coordinated care for our children. We need to ask the right questions, prompt a broader discussion, speak up and not accept the first answer we are given. As a trivial example, early in our journey, one of Benjamin’s challenges was a strong tendency to turn his head to the right at all times. Our physio recommended positioning him so that points of interest (a window, a light, a face) were always on his left, to encourage him to turn that way. A week later, our ophthalmologist proposed always providing visual stimulation to Benjamin’s right, where he could see it easily, thereby providing maximum opportunity to encourage his vision, and his brain, to develop. I never thought to mention to each professional what the other had said, to suggest dialogue between the two or seek a compromise that would be best for Benjamin. I just worried that whichever way I positioned him it would be detrimental to one aspect or another of his development. In the end I decided that, on good days when he was less strongly fixed to the right I would encourage him to turn to the left; on bad days when there was no chance of him moving to the left for anything, I would provide things to look at on the right. At a later date I mentioned my strategy to you both, and you both agreed! Nowadays, Benjamin’s head is usually pretty much central and his vision is vastly improved (unless I’ve forgotten to get his fringe cu t…).